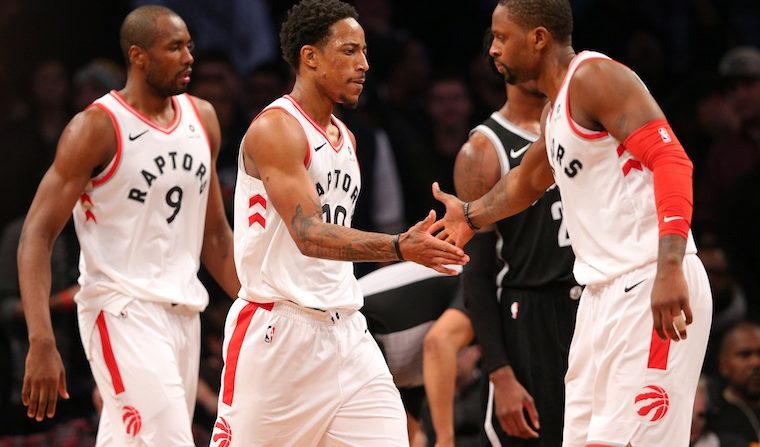 With DeMar DeRozan playing out of his mind, a modernized offense, underrated continuity and a young second unit that’s emerged as one of the best in the NBA, the 2017-18 Toronto Raptors are probably the best group in the franchise’s history.

Their relative lack of media attention fuels them, yet that lack of acknowledgment could partially be attributed to a lack of postseason success. At 28-10, these Raptors are trying to prove that they can take the next step. The hardest jump to make, said 13-year NBA veteran C.J. Miles, is from an elite team to a championship level team.

Toronto began preparing to make changes right after suffering yet another early playoff exit in May, this time a second-round sweep at the hands of the Cleveland Cavaliers. Team President Masai Ujiri said at the time that the team needed to change its culture and modernize its offense. Over the last several months, the Raptors have slowly taken steps to accomplish those goals.

Raptors head coach Dwane Casey says he’s encouraged DeRozan to work on his 3-point game every offseason, and DeRozan has gone to Los Angeles every season and done that. But this season, “with our new emphasis of shooting more threes,” Casey said, “he’s come to the part and is shooting the ball with confidence and conviction.”

After taking just 1.7 threes per game a season ago, DeRozan is attempting 3.1 per game and is making them at a 37 percent clip, easily a career high. In four January games, DeRozan has averaged 35.5 points per game, including 35 in Monday’s overtime win over the Nets in Brooklyn. And that’s all happening while his father is dealing with health issues.

As a team, the Raptors are attempting nearly eight more triples per game — 32.1 this season, ninth-most in the NBA, after attempting 24.3 per game in 2016-17 — and have gone from sixth to third in points scored per 100 possessions.

“When you got two guys that care about winning more than anything else,” Miles told The Comeback, referring to All-Star guards DeRozan and Kyle Lowry, “it makes everything easy.”

A major reason why Toronto had success integrating a new offensive system so quickly is its continuity. Of the 17 players who logged minutes for the Raptors last season, only Patrick Patterson, P.J. Tucker, DeMarre Carroll and Jared Sullinger aren’t on this year’s roster.

DeRozan, Lowry — who’s day-to-day with a bruised tailbone after taking a very hard fall in overtime on Monday — Jonas Valanciunas and Serge Ibaka have outscored opponents by 8.2 points per 100 possessions while on the floor together, according to NBA.com. But Toronto only really took off this season after inserting rookie wing OG Anunoby into the starting lineup in mid-November.

Anunoby, the 23rd pick in June’s draft, only fell to Toronto because he suffered a season-ending knee injury last January while playing at Indiana University. But Anunoby’s defensive tenacity (9th among all small forwards in ESPN’s defensive Real Plus-Minus) and 3-point abilities has been perfect alongside the aforementioned Raptors quartet.

“I knew I could contribute right away,” Anunoby told The Comeback, “so just getting healthy was the biggest thing for me. And I knew everything would fall into place after that.”

Toronto is 21-5 since Anunoby entered the starting lineup, and the current five-man unit is outscoring opponents by 16.3 points per 100 possessions while on the floor, per NBA.com.

“His maturity level is off the charts for a rookie,” Casey said.

Another essential element in this successful Raptors start has been the continued growth of their young second unit, and how it’s developed chemistry and quickly grasped the team’s new offensive scheme. That began, according to backup point guard Delon Wright, when the Raptors instructed their young players to learn and work out together during the offseason.

While guard Fred VanVleet, forward Pascal Siakam and center Jakob Poeltl played in the Las Vegas Summer League last July, Wright and wing Norman Powell joined them to practice together. Those workouts extended to L.A. and Toronto and carried over into the season, where reserve players are finding success. The second unit bought into the system, Wright said, and are now rotation mainstays.

“I think the young guys are trying to make a concerted effort to be one of the better benches in the NBA,” VanVleet told The Comeback.

Casey, like most competent modern NBA coaches, has tried to stagger sitting his star players so that at least one of them is on the floor at all times. DeRozan has usually been the one on the court with the bench players, and the results have been incredibly positive.

In 66 minutes together, the four-man unit of DeRozan, Poeltl, Siakam and VanVleet have outscored opponents by 58 points, per NBA.com, and are 15-3 in games when they’re on the floor together. When Miles replaces DeRozan in that grouping, 137 minutes in total, Toronto is 14-3 in those games.

“This is definitely one of the deepest teams I’ve been on,” Miles said. “One through 12, 13, you’ve got a lot of talent. Young talent, veteran talent, a lot of guys that are understanding what we’re trying to do.”

Despite a better current record than the Rockets, Spurs and Cavs, not many people seem to be paying attention to Toronto, or taking them very seriously relative to its 28-10 mark.

“It’s been like that ever since I’ve been here,” Powell told The Comeback. “That’s just something you’re used to, something that adds fuel to the fire, being an underdog for so long and you’ve been constantly knocking at the door. I think it’s good for us. It keeps us hungry, keeps us working.”

What the improved Raptors are working towards is not only avoiding another embarrassing and disappointing playoff defeat but finally making the league’s hardest jump, as Miles said, from an elite team to a true championship contender. With home games against Cleveland and Golden State this week, it’ll be an intriguing midterm test of sorts to see if Toronto is ready to take that next step.