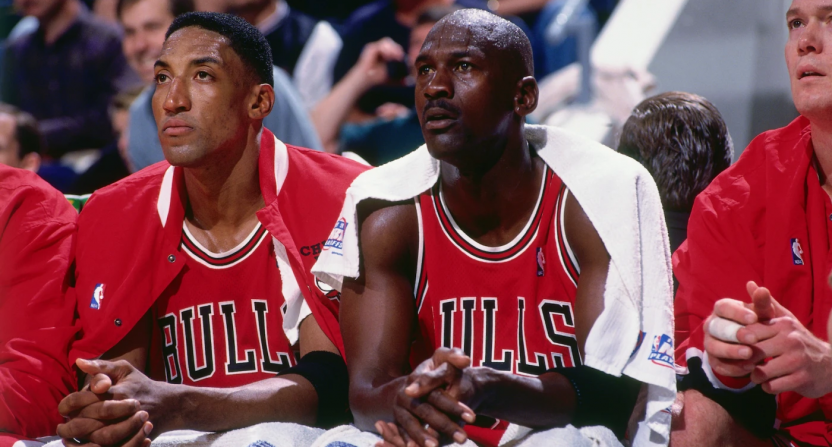 As we’ve seen with the popularity of ESPN’s The Last Dance, everyone likes reminiscing about Michael Jordan and the 1990s Chicago Bulls. They haven’t lost their cultural relevance. Jordan is a benchmark for NBA superstars, to the point where stars have consciously taken steps to craft their legacies in a similar, championship-focused way. Modern sports dynasties will always aim for the popularity and success of Phil Jackson’s Bulls.

It’s not hard to see why those Bulls have become the standard for dominance. They are the ideal sports dynasty. Six championships, easily assigned to a decade, and a transcendent superstar with a perfect Robin who’s a legend in his own right. The problem with this is that they set unrealistic expectations for every other superstar and team. Circumstances aligned for the Bulls in an irreplicable way.

Other teams have crafted dynasties, and one could certainly argue that there are more impressive dynasties in sports history (the 21st-century Patriots come to mind), but none can reach the perfection of the ‘90s Bulls. There is no reconciling championship losses, or failures. For the most part, there were no significant injuries that hampered their success. Their coach was a supremely successful master of motivation and personality management.

They’re easy to evaluate, and that’s what everyone wants. They went six-for-six, and in the years leading up, they grew in an impressively linear fashion:

One of the reasons the Bulls dynasty became such a memorable storyline is because of how linear it was. After Jordan arrived:

Those losses to the Pistons were natural parts of their growth. Jackson was only there for one of those seasons, the 1990 conference finals loss. Once they started winning, they didn’t stop, vanquishing the final iteration of a previous dynasty (Magic Johnson’s Lakers) and stomping Western Conference teams every year.

Jordan, of course, left to play baseball for two years, and when he came back rusty late in the 1995 season, they lost to the young Shaquille O’Neal and Penny Hardaway Orlando Magic in the playoffs. Their revenge tour the year after, when they went 72-10, confirmed to everyone that they were unbeatable. The detour in ‘94 and ‘95 only served to emphasize their invincibility.

There are iconic moments to remember, and a cast of talented role players orbiting Jordan and Scottie Pippen. Jordan is the sort of superstar people desire: an obsessively competitive winner who rides his teammates hard and wears his clutch gene on his sleeve. When he seeks out tough midrangers, he’s willing his team to victory.

Essentially every other sports dynasty has a weakness that the Bulls don’t. Some don’t have the longevity. Others have ups and downs throughout the years, or turnover at important positions. The ‘60s Celtics are an exception, but they played in an era with fewer teams and lesser quality opposition. The same goes for older iterations of the Montreal Canadiens.

No one can match the clean and dominant ‘90s Bulls. Think about the Showtime Lakers or Larry Bird’s Celtics — Magic Johnson went to nine Finals, but only won five, and Bird went 3-2 in Finals, with injuries damaging the later years of his career. Wayne Gretzky’s Edmonton Oilers went to five Stanley Cups in six years, winning four, but in 1990, the Oilers won another a couple years after trading Gretzky. Imagine Jordan leaving and the Bulls winning it all with Pippen as the best player. Hockey is a very different sport, but it’s a weird thing to imagine.

The NFL’s dynasties tend to be more spread out. The Steelers had a pair of back-to-backs in the ‘70s. The Joe Montana 49ers won four championships spread between 1981 and 1989 (with Steve Young adding a fifth in 1994). The Cowboys had three in the ‘90s. I would argue the Bill Belichick-Tom Brady Patriots’ run over the past 20 years is the most impressive dynasty in sports history, but even they lost in the Super Bowl three times. After the Patriots’ most dominant season, in 2007, they lost to the underdog Giants. The Bulls were never going to lose after going 72-10.

Chicago owned a decade, never lost once they won their first, and ran with GOATs in various forms: arguably the greatest player ever, the clear greatest coach ever, and arguably the greatest perimeter defender of all-time in Pippen. The Golden State Warriors have produced better teams than those Bulls, but their three-year run with Kevin Durant required a controversial free agency signing and a big break with the 2016 cap spike. The 2018 Warriors might have lost in the conference finals had Chris Paul not gotten injured.

Everyone wants to hold LeBron James to Jordan’s standards, but in terms of championship records and Finals appearances, it’s apples-to-oranges. James left Cleveland for Miami in order to win championships with a real supporting cast. Jordan had the luxury of staying in Chicago and waiting for Jerry Krause to build a juggernaut, and for Jackson to arrive. The Cavs never came close to providing that for James. It’s a miracle he dragged them kicking and screaming to the Finals in 2007, and then managed to pull off two 60-win seasons before The Decision.

Evaluating James on the standards of Jordan, at least from a championships standpoint, is unrealistic. The Heat’s loss to the Mavericks in 2011 is undoubtedly a mark against LeBron’s legacy, but consider the circumstances of LeBron’s other Finals losses: his 2007 Cavs, with Larry Hughes as the second-leading scorer, never stood a chance against the Tim Duncan Spurs; the 2014 Spurs was essentially a super-team; the 2015 Warriors still needed six games to beat LeBron’s Cavs even after Kyrie Irving and Kevin Love got hurt; and in 2017 and 2018, LeBron went up against the KD Warriors, the most unbeatable NBA team ever assembled.

Jordan’s flawless success in the ‘90s pushed the “ringz” mindset to the forefront. There are players who will always be degraded due to their lack of titles based on the other players in history who did win championships. Those ringz arguments tend to overlook the circumstances that aided Jordan: a weaker era of elite teams, an all-time coach, and an incredible supporting cast that won 55 games without him in 1994.

Every star player now has to be driven by winning championships, because their legacy is unjustly based on titles. That’s how you get LeBron crafting his own star-filled teams in three different cities — he never had Krause to build him a good team. He did it himself. Durant wanted championships so badly that he joined the 73-win Warriors, forming what would’ve been an unbeatable three-beat had he not gotten injured in 2019. Paul George and Anthony Davis asked for trades to be elite second options. It’s player empowerment, but it’s also a desire to get to secure their legacies.

The ‘90s Bulls are in some ways at the root of this pursuit. They are nearly unmatchable in success and dominance, but every NBA star that comes along will be perceived as not measuring to their standards. It’s fair to both appreciate their success and understand that rings don’t have to drive every discussion about greatness. Still, Jordan’s Bulls stand alone as the ideal sports dynasty. For that reason, they won’t be going away anytime soon.