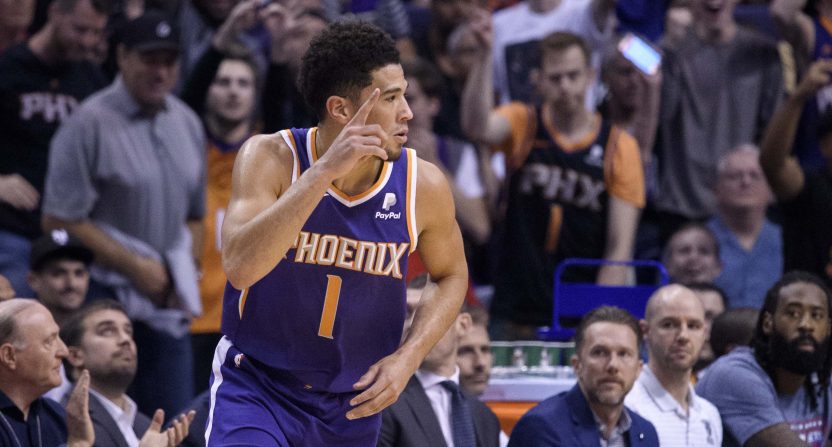 Here are some of the biggest surprises so far in the NBA:

Last year, the Suns (19-63) had the worst record in the Western Conference and the second worst scoring differential in the league (-9.3). This season, the Suns (6-4) have the third best record in the Pacific Division and the sixth best scoring differential (+5.5). One of their victories includes a 130-122 triumph over the L.A. Clippers. Even more amazing – they are doing this without 2018 first round pick Deandre Ayton who has played one game and is serving a 25-game suspension for violating the terms of the NBA/NBPA Anti-Drug Program by testing positive for a diuretic.

Credit star guard Devin Booker (25.7 ppg) who is shooting a career-best 53.4 percent, including 48.1 percent from 3-point range and has a career-high player efficiency rating (21.8). Credit the front office for the additions of role players within the squad including point guard Ricky Rubio and forwards Aron Baynes and Frank Kaminsky. Also, credit Monty Williams who is the early favorite for coach of the year. Williams guided New Orleans for five seasons before being fired in May 2015. Last season he was an assistant with the Philadelphia 76ers who pushed the eventual champion Toronto Raptors to the brink. Now, Williams is trying to lead the Suns to their first playoff appearance since 2010.

Even with the departure of Kevin Durant, Golden State still looked like a possible contender. This is a striking collapse especially in their inaugural season at the Chase Center. This injury-plagued franchise will be lucky to make the playoffs. It’s like Thanos snapped his fingers and made their All-Stars disappear: Stephen Curry (broken hand) possibly out for the season, Klay Thompson (knee) probably out for the season, Draymond Green (finger) has played just six games. Golden State (2-9) has the league’s worst record. Off-season acquisition D’Angelo Russell (26.3 ppg) can’t save the Warriors by himself. The offense is mediocre (15th in the league in efficiency) and the defense is a horror show (last in efficiency).

The best thing for the Warriors is to probably sit everyone and give up on an already lost season and regroup for 2020-21. They’ll probably have a lottery pick and if it’s the No.1 overall pick, Golden State could return to form quickly. They should also focus on developing their young talent. Rookie guard Eric Paschall, a second-round pick, scored 34 points with 13 rebounds in a victory over Portland.

The Miami Heat are as good as anyone when it comes to finding and developing players. The latest discovery appears to be 6-foot-2 guard Kendrick Nunn (16.9 ppg). College basketball fans might remember Nunn as a former Illinois player who transferred to Oakland University. In the 2017-18 season, Nunn (25.9) was the nation’s second-leading scorer behind only Oklahoma’s Trae Young (27.4).

Nunn went undrafted and spent the 2018-19 season in the G League with the Santa Cruz Warriors, Golden State’s affiliate. Miami signed Nunn in the offseason. The shooting guard got off to a torrid start, scoring 112 points, the highest total ever for undrafted player through his first five games. He broke the record previously set by Connie Hawkins of the Phoenix Suns when he scored 105 points in his first five games of the 1969-70 season. Nunn probably won’t keep up this pace, but he has been a valuable player for Miami (7-3).

The team with the NBA’s best record is… the Celtics (8-1). Brad Stephens is doing it again. When expectations are low, this coach generally exceeds them. After a season-opening 107-93 loss at Philadelphia, Boston is now on an eight-game winning streak, including victories over Toronto and Milwaukee. Kemba Walker’s offensive rating is a career-high 118 and team chemistry seems to be better. It also helped that Gordon Hayward started to look like Gordon Hayward before he broke his leg two years ago. But with Hayward now hurt again (fractured hand) and is out until late December, the Celtics will have to hope Walker and Jayson Tatum can carry them.

Meanwhile, shockingly, the post-Kawhi Leonard Toronto Raptors (7-3) has the same record as the L.A. Clippers (7-3) with Kawhi. Pascal Siakam is now the leader of the Raptors and is a legit MVP candidate. Toronto has wins over the Rockets and Lakers.

Many people snickered when the L.A. Lakers signed Howard to a non-guaranteed contract. It looked like a desperate move by a team with little cap room and little frontcourt depth following the season-ending injury to DeMarcus Cousins. Howard had a well-earned reputation as a malcontent with fading skills but he has reinvented himself. His offensive numbers won’t wow you (on pace for career lows in ppg (6.4) and rebounds (7.4)) but Howard’s defense has been crucial for the Lakers.

Howard has the best defensive rating in the league (92.8), ahead of reigning two-time defensive player of the year Rudy Gobert of the Jazz. The Lakers have the best defense in the league (98.1) and Howard also has the best effective field goal percentage (78.8).  L.A. doesn’t need Howard to be a star. If he continues provides defense, hustle and minutes, that will be enough. Howard has even emerged as a fan favorite.