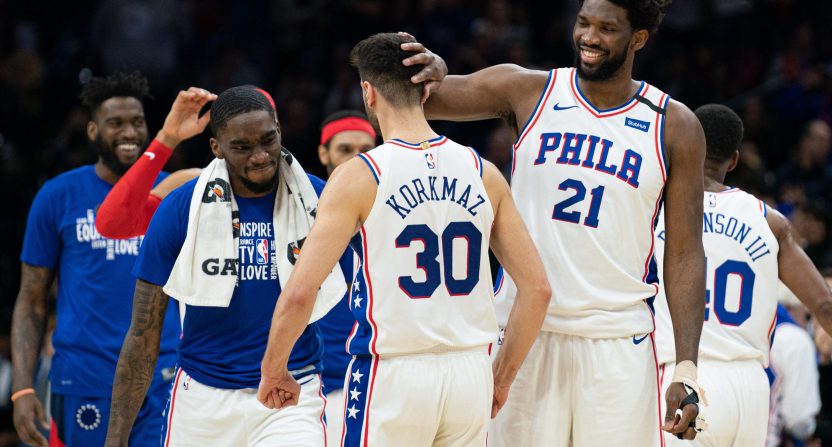 Tuesday night, the Philadelphia 76ers gave us a reminder of why they have been considered championship contenders this season. In a high-quality matchup of elites, the Sixers beat the LA Clippers on the back of a combined 52 point performance from Ben Simmons and Joel Embiid, adding to an impressive ledger of wins. Philly now has victories over the Clippers, Bucks, Lakers, Jazz, Celtics, and Nuggets this season.

The list of NBA teams capable of those sorts of results is not long. This isn’t college football, and there is no such thing as quality wins here, but the Sixers have given us indications that they can play at a high enough level to beat the best teams. They reach such an impressive defensive ceiling that no team should want to face them in a seven-game series.

And yet: Philly is fifth in the Eastern Conference and went on a four-game losing streak to start February. They are 25-2 at home and 9-19 on the road. It is impossible to explain how such a dramatic discrepancy happens. Expecting the Sixers to simply turn it on in the playoffs might be wishful thinking given the various stylistic flaws we know they have. There are, also, road games in the playoffs.

Drama exudes from the Sixers when things aren’t going well, simmering down when they poke their heads out as a contender, the way they did on Tuesday. The most recent, and best, example of Sixers tension played out on Instagram, where Embiid posted a caption saying “You either die a hero or live long enough to see yourself become the villain.” Jimmy Butler commented support. Embiid heard boos from angsty Sixers fans before the game against LA.

It’s become clear that the Simmons-Embiid partnership will either die a hero (by winning a ring) or become a villain, and there is no inbetween. April, May, and perhaps June will be the final test for whether these two All-Stars can work together effectively. If Philly falls short, they could pull the trigger on a blockbuster trade.

The discussion over whether they should deal away Simmons or Embiid will be fascinating, and we will cross that bridge when we get there. For now, we have to figure out whether the Sixers will make a run at the title with the awkward, mega-talented core they have now.

One thing is for sure: at their best, this team is good enough to beat anyone in the NBA. Their defense will be the primary reason if they make their way to a Finals berth. On that end, they are suffocating, with two All-Defense-caliber players (Embiid and Simmons) and a lengthy, athletic cast of perimeter defenders. Their fourth-best defensive rating backs them up, as does Embiid’s impressive 100.9 defensive rating, which is one of the highest among non-Bucks players.

The Clippers saw first-hand just how dominant Philly can be on that end. Simmons is a menace, a physical specimen who can guard any position and contest any shot. His hands are quick and always active, poking at the ball and forcing players to give it up. Embiid is one of the very best defenders in the league when he’s on. He has an acute sense of when to use his strength and when to fall back and deter simple layups. He also has excellent mobility when he chooses to use it:

That’s Embiid stuffing Marcus Morris, who played center late in the game in a small-ball lineup. Embiid has this sort of ceiling defensively.

Alongside the two big stars, Josh Richardson is a bulldog. His recent injury was an underrated part of why they tailed off for a few games. He was impressive all game defending Paul George, who finished with only 11 points on inefficient shooting. Al Horford, best when Brett Brown is able to find him minutes at the 5 with Simmons running the point, is a productive rim protector. Here’s Horford tying up Kawhi Leonard on a drive:

Having this sort of length and defensive nuance will go a long way in the playoffs. We haven’t even talked about Matisse Thybulle, the rookie who can block threes and guard everybody.

Simmons is so good defending top options in part because he is smart about using his wingspan to affect shots from anywhere. When a player he is guarding uses a screen, Simmons is quick enough to follow him and prevent an easy shot, while also trusting his ability to rotate if need be:

Because Simmons is able to contest Leonard’s midrange jumper, Embiid has the luxury of staying back in the paint, where he can box out Ivica Zubac and deter any shots at the rim.

When Simmons’s man acts as the screener, Simmons morphs into a rim protector. Here, Leonard screened for Morris and Simmons planted himself in the paint, cutting out both a pass to Leonard and a Morris attempt at the rim:

There is a convincing argument that Simmons deserves to be in the Defensive Player of the Year race. The Sixers are a good bit better defensively with him off the floor, but there is precedent for elite defenders having a confusingly bad defensive net rating. Simmons, with Embiid behind him and a cast of tough defenders around him, is the biggest reason why Philly’s defense should be so impressive this spring.

Questions will remain about Philly’s offensive aptitude. Obviously, Embiid and Simmons are not ideal fits next to each other on that end. Glenn Robinson III has looked solid off the bench since arriving from Golden State at the deadline, but spacing and shot creation issues persist. It will be the defense, which we’ve seen cause significant trouble for the Bucks and other elites, that could postpone decisions about Embiid and Simmons.