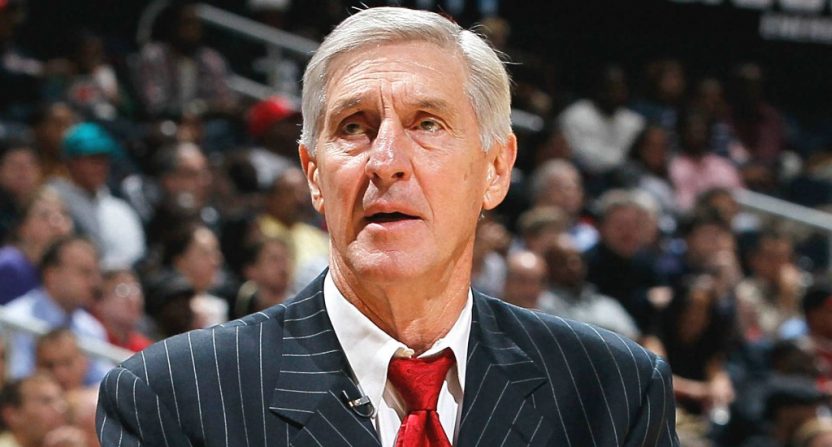 One of the most winningest coaches in NBA history has passed away. The Utah Jazz revealed that longtime head coach Jerry Sloan died early Friday morning at the age of 78 due to complications from Parkinson’s disease and Lewy body dementia.

Sloan spent the vast majority of his 46-year pro player and coaching career with the Chicago Bulls and Utah Jazz. As a player, Sloan was drafted by the then Baltimore Bullets in 1965 but was traded to the Bulls the next season. In Chicago, Sloan was their first star player and retired after 10 seasons with the team. Sloan’s #4 was retired by the Bulls, becoming the first player to have his number retired by the team.

In the following years, Sloan went into coaching. He began his career in Chicago but after three seasons, Sloan went to Utah in 1988 where he remained for the rest of his career. With the Bulls and Jazz, Sloan won a total of 1,221 games, ranking fourth all-time. While he never won an NBA championship, Sloan’s Jazz teams were in the NBA Finals twice, both losing to the Bulls. Sloan was inducted in the Pro Basketball Hall of Fame in 2009 and retired from coaching in 2011.

The lack of a title might have led some to leave Sloan out on their NBA coaching Mount Rushmore but he was definitely one of the best. The Jazz had been in the playoffs for Sloan’s first 15 years with the team and only missed the playoffs in four of his 23 years coaching the Jazz. Some head coaches don’t even come close to coaching for 15 years, Jerry Sloan not only did that but he made the playoffs each year. Other than Gregg Popovich, no one has seemed to replicate that kind of longevity and consistency.

Over the past few days, it was apparent Sloan wasn’t in good health. Jazz legend Karl Malone reached out, asking for prayers for his former coach. Tributes began pouring in for the coaching legend as he will be remembered fondly.

I loved everything about Jerry Sloan, from the way he played to the way he coached. He was a tenacious competitor who represented the Bulls of the 70s so well. Jerry became one of my favorite coaches when he was on the 1996 Dream Team staff and it was an honor to learn from him. pic.twitter.com/pEhbmiFbzp

Jerry Sloan wasn't just a coach for the @utahjazz, he was our coach. We looked up to Coach Sloan and learned from him because he was a man of dignity and principle. His impact is profound, and we will forever appreciate his contribution to our State. pic.twitter.com/yApKcZd2GA

So sorry to hear of the passing of Jerry Sloan. I was fortunate to spend a short time playing for him with @utahjazz early in my career. He made a lasting impression on me as a great basketball mind and a family man of integrity. Praying for comfort for his family. #RIPCOACH

I learned so much about basketball sitting at the bar with Jerry Sloan and his longtime assistant Phil Johnson. They were beyond patient with a young, dumb reporter. And Jerry never made excuses if his team lost-which wasn’t that often. RIP to a great, great coach. https://t.co/PaQLnMLn1j

I worked for FOX 13 in SLC early in my career. Jerry Sloan was simply fantastic to deal with. He was exactly as he came off…. totally genuine w an endearing gruff no nonsense attitude. Loved talking about basketball and his tractor and I was incredibly fortunate to listen. #rip

Jerry Sloan is the only NBA coach I've ever had dinner with multiple times. Not because we were friends or anything but because he always ate his pregame dinner in the media dining room. I never took those moments for granted. A true legend. RIP, Coach. https://t.co/0JOzGViEIK

Jerry Sloan is one of only two NBA coach to record 1,000 wins with the same franchise.

Sloan is one of only three coaches in NBA history to win at least 50 games in 10 or more seasons.

Jerry Sloan was a very good, hard nosed player on good teams in the 70’s and became one of the winningest coaches ever. He also had a dry sense of humor that was the equal of his legendary intensity. Thoughts are with his family and friends, he was a lifer in all the best ways. pic.twitter.com/KyBlvhKBA5

RIP Coach.. You don’t think of the Jazz without thinking of Coach Sloan, Thankyou. https://t.co/89I7uUeZqy

Rest in peace to the great Jerry Sloan one of the greatest and toughest players in Chicago Bulls history. My condolences go out to the Sloan family and the entire @utahjazz community during this difficult time. Great player, great coach but an even better person. #RIPJS4🙏🏾