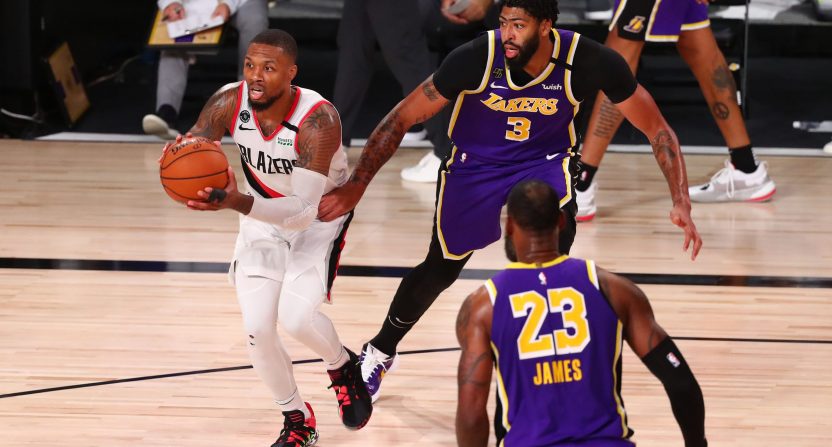 Take a bow, NBA players and commissioner Adam Silver. The league looks like it will complete its season in Orlando without any COVID-related interruptions. The only work stoppage occurred due to activism and will result in NBA arenas being used for voting stations. Apparently except for you, Milwaukee. #Boo.

Here’s a look at the best and worst from the bubble:

With a victory on Friday, LeBron James will earn his fourth NBA championship, and his third with a different team. He might never eclipse Michael Jordan in the eyes of some. But he has done some things that are amazing. He’s a one-man dynasty having been to the NBA Finals nine out of the last 10 years. This was a crucial season for James, who will turn 36 in December. He was the MVP runner-up, but who knows how many title chances he has left. We may never see anyone as good as James again.

It’s close between LeBron and Davis. Both have been sensational. Slight edge to the Unibrow. After suffering through seven seasons in New Orleans, Davis has made the most of his first season with the Lakers. Among players who reached at least the second round, he’s second in the playoffs in scoring (28.2), fourth in field-goal percentage (57.8), and sixth in rebounds (9.3). In the advanced metrics, Davis leads in win shares (3.9), and is second in Player Efficiency Rating (31.1) and in Value Over Replacement player (1.7). Big men still matter.

Damian Lillard was an unstoppable scoring machine in eight regular-season games in the bubble. He averaged 37.3 points, 9.6 assists, and 4.3 rebounds, while shooting 49.7 percent from the field and 43.6 percent on three-pointers. He closed out the regular season by totaling an absurd 154 points over the three games, including 61 against Dallas. Portland won those three games by a grand total of seven points to reach the playoffs.

Russell Westbrook was returning from a quad injury. And yes, playing with James Harden can be complicated. But even with that factored in, he played poorly. Westbrook had career-worst playoff averages in points (17.9), assists (4.6),and  free throw percentage (53.1). Among players who reached at least the second round, he was second worst in win shares (minus-0.2) and third worst in box/plus minus (-3.2). His performance at the end of the Game 6 loss in the first round against Oklahoma City was horrific.

Zion Williamson entered the season as the most hyped rookie we’ve seen since Anthony Davis (2012). But he was limited to 24 games due to injury. Still, when the NBA resumed play, many were curious to see how Williamson would look after the long layoff. He and New Orleans went a disappointing 2-6 (1-5 with Zion) in the bubble. Most alarming: the Pelicans were minus-58 in 104 minutes with Williamson on the floor.

As previously mentioned, Erik Spoelstra reminded everyone that he’s one of the best in the league. He led a team with four key players 25 and younger into the NBA Finals. This roster isn’t as talented as Milwaukee or Boston. The Heat beat both in a surprising playoff run.

Doc Rivers is a good coach, but the buck stops with him. When you have championship aspirations, you can’t blow a 3-1 series lead to the Denver Nuggets in the second round. Unbelievably this is the third time this has happened to Rivers as a coach. Don’t feel sorry for Doc. He’ll enjoy his new job with the Sixers.

The Dallas Mavericks had no Kristaps Porzingis and seemingly no shot in Game 4 of its first-round series. Luka Doncic’s sprained left ankle would surely limit his effectiveness. Well, Doncic enjoyed the performance of his life. Doncic made a stepback three-pointer at the buzzer to win the game 135-133 in overtime and tie the series at 2-2. Doncic finished with an unbelievable triple double: 43 points, 17 rebounds, and 13 assists. It was the kind of game that officially elevated Doncic to superstar status. He’s among the most popular players in the league.

The degree of difficulty here was jaw-dropping. With the score tied at 115, Devin Booker dribbled right into the heart of the defense. Kawhi Leonard and Paul George are among the best in guarding the perimeter. No matter. Booker took both on and elevated for a turnaround jumper. Swish. Ballgame. It capped a 35-point outburst and provided a meme-worthy moment.

It’s virtually impossible to make a game-winning basket with half of a second left. Toronto coach Nick Nurse drew up a play that he said he learned from ESPN analyst Hubie Brown’s instructional DVD. Kyle Lowry made an inbounds pass over 7-foot-5 Tacko Fall to OG Anunoby on the other side of the court for a shot that gave the Raptors a 104-103 victory in Game 3 of the Eastern Conference semifinals.

The first 50-point game of the bubble wasn’t from James Harden, Damian Lillard, or Giannis Antetokounmpo. That honor belonged to… T.J. Warren?!? He channeled his inner Steph Curry to light up the Sixers. He scored a career-high 53 points by making 20-of-29 shots (9-of-12 from three-point range). Indiana won 127-121.

The NBA bubble: one long recruiting pitch for coach John Calipari. Kentucky had the most players in Orlando (17) and the most in the playoffs (13). Four reached the NBA Finals: Anthony Davis, Tyler Herro, Bam Adebayo, and Rajon Rondo. That’s not all for the Kentucky ties. Heat president Pat Riley and Lakers coach Frank Vogel are both alums. Riley played for the Wildcats. Vogel was a student manager.

Chicken wings so good, you’ll break quarantine for them! You can’t buy the type of advertising the Atlanta strip club got from Lou Williams’ ill-advised visit. At first, we all laughed at the sheer ridiculousness of an investigation over an NBA star getting food at a gentlemen’s club and maybe a little bit more. Guess what? The wings reportedly are legit. Williams even has a flavor named after him: “LouWill Lemon Pepper BBQ.”

Williams might have gotten away with it if rapper Jack Harlow hadn’t posted a picture of the two at Magic City on Instagram. Worst wing man ever.

NBA players spent months in the bubble. That’s a long time to be living in a hotel. Russell Westbrook demonstrated his appreciation of the Grand Floridian housekeepers by reportedly leaving an $8,000 tip, according to the Dallas Morning News. He also apparently left the room “spotless.”

Whatever Danuel House did in the privacy of his own room, hope it was worth it. He’ll be forever known as the first player to be banned from the bubble. Officially, he was kicked out for violating safety protocols. The NBA said: “House had a guest in his hotel room over multiple hours on Sept. 8 who was not authorized to be on campus.” The guest reportedly was a female COVID-19 testing official. No one knows exactly what happened. But it cost the Rockets their starting small forward during the playoffs series with the Lakers.

There have been many celebrities like Barack Obama, Lil Wayne, and Robin Roberts. No one made us smile like the dude with the guitar.

Jimmy Butler started his own business inside the bubble: Big Face Coffee. For $20(!), he’ll use his French press machine to deliver you an expensive cup of joe. Small, medium, large. Doesn’t matter. It’s still $20. Strict rules too: cash only and no IOUs.

Nothing beats JJ Redick staring blankly into the abyss knowing that the end is near.

The 7-footer finished a 12-ounce can of Coors Light it in less than three seconds.