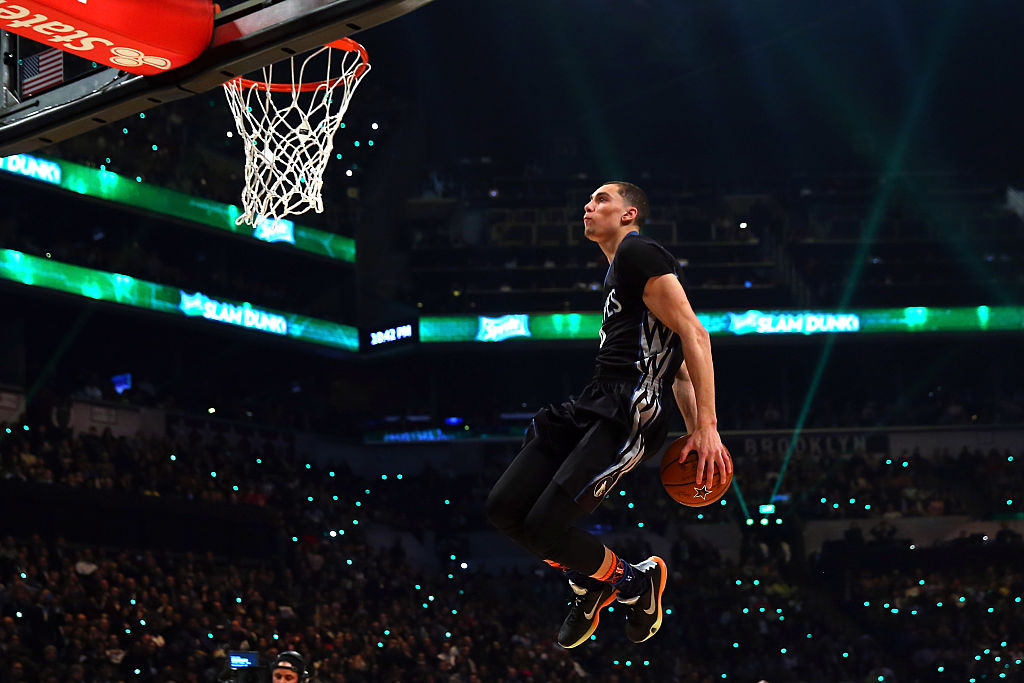 All-Star Weekend officially kicks off Friday night with the Kevin Hart Comedy Special, otherwise known as the Celebrity All-Star Game. But for those us not on site in Toronto, the weekend doesn’t truly begin until Saturday night.

Sure, the dunk contest, the putative main event of the evening, is not what it once was. At this point it’s hard come up with a move we’ve never seen. Also, stars like Michael Jordan and Kobe Bryant are no longer competing. If you know what team each of this year’s four contestants play for you’re probably doing better than the average casual fan.

But fine, say seeing the Warriors’ baby-faced assassin launch rainbows into the air, and Zach LaVine doing MJ imitations, isn’t your thing. No worries, I have a solution for you, a way to make All-Star Saturday Night enjoyable for you and all your pals; a game my buddies and I have been doing for some years now.

Here’s how The NBA All-Star Saturday Night Fantasy Draft works: throw everyone competing in Saturday night’s contests into one pool. That means the eight players in the skills competition, the eight in the 3-point contest and the four in the dunk contest.

Divide them up among your friends via snake draft. The scoring system we use is a simple one: Whatever place a player finishes in in his respective contest, that’s how many points he gets. So if Steph Curry wins the three-point contest, he gets one point. If Aaron Gordon finishes third in the dunk contest, he gets three points. And so on. The team that finishes with the fewest points wins.

It might sound simple, but I promise this: get a few friends together, throw some cash on the table (for fun, because throwing cash is fun no matter where you are), divide the contestants up and suddenly watching CJ McCollum dribble through cones won’t seem so boring.

As for what order you should draft the players in, here’s how I’d rank them this year:

1. Stephen Curry, 3-point: He’s the defending champ, and set a record last season with a single-round score of 27. There’s no such thing as a sure thing. But this is pretty damn close.

2. Zach LaVine, Dunk: Yep, predicting another repeat here. LaVine can jump through the roof, and it doesn’t seem like he’ll be facing much competition.

3. Isaiah Thomas, Skills: He’s one of the fastest, and quickest, players in the league, and he’s got that chip on his shoulder that every undersized players carries wherever they go.

4. Patrick Beverley, Skills: That said, no one in the league competes harder than Beverley. Dude would give 100 percent in a game of hopscotch.

5. Klay Thompson, 3-point: One of the few players who could possibly give Steph a run for his money. His shooting technique lends itself well to the competition’s format.

6. Draymond Green, Skills: He’s one of the best passing forwards in the league and no frontcourt player handles the ball more than him.

7. J.J. Redick 3-point: His stroke is as pure as anyone’s outside of Golden State. Also shooting a ridiculous and career-high 48 percent from deep.

8. Anthony Davis, Skills: He was a guard until growing like half-a-foot during the summer following his junior year of high school. He’s extremely comfortable putting the ball on the floor.

9. Kyle Lowry, 3-point: He’s not quite at the level of Curry, Thompson or Redick, but never underestimate the hometown players in these competitions.

10. DeMarcus Cousins, Skills: With the way he’s been shooting from deep this year, he might be as good a bet in the skills competition as anyone.

11. Devin Booker, 3-Point: He’ll challenge Curry one day. Just not as a rookie.

12. Aaron Gordon, Dunk: Lumping Gordon and Barton together. Not sure which of them to favor, but someone will challenge LaVine.

14. Karl-Anthony Towns, Skills: Can’t go with a rook with a semi-crooked jumper.

15. James Harden, 3 Point: Well we know the volume won’t be an issue for him.

ICYMI: @JHarden13 finished with 37p last night against the Warriors.https://t.co/kH0SIlwZiE

16. C.J. McCollum, Skills: Doesn’t have the same level of speed as Beverly and Thomas.

18. Jordan Clarkson, Skills: Byron Scott has probably sapped all the skills out of him.

19. Chris Bosh, 3-point: That Bosh is competing in a 3-point contest is kind of incredible; definitely not something that anyone would have foreseen when he first came into the league. That said, he’s just not as consistent from deep as the men he’ll be competing against.

20. Andre Drummond, Dunk: Seven-footers viciously slamming the ball through the hoop just doesn’t carry the same sex appeal as a guard soaring through the air. Dwight Howard was the exception, not the rule.

So there you have it, a foolproof method for turning even the most boring of All-Star Saturday Night into a fun viewing experience, proving once again that there’s nothing in the world that can’t be enhanced by a fantasy draft and throwing money.