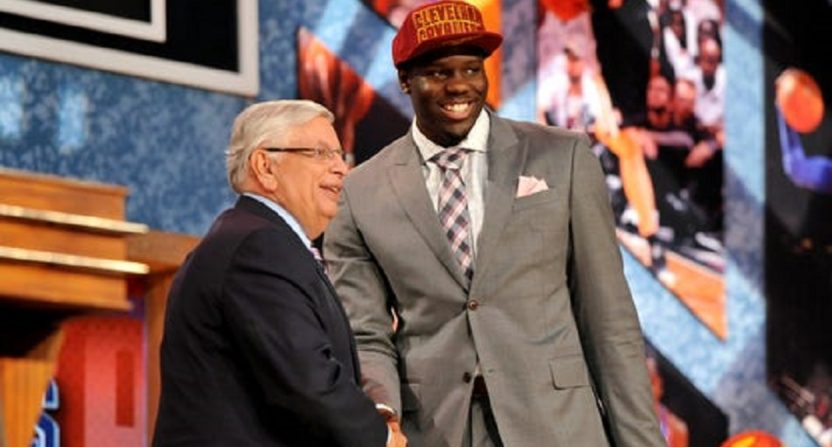 The NBA Draft is almost here. This is your annual reminder: just because your team has a lottery pick (one of the top-14 selections), that doesn’t guarantee you’ll get a good player.

We thought it would be interesting to look at the worst lottery picks since 2009. Included in this analysis, is the advanced metric Value over Replacement Player (VORP).

For a single season roughly:

For the players listed below, these are their career VORP totals. These numbers are frightening.

Should have drafted: Kristaps Porziņģis (No. 4 to the New York Knicks).

Jahlil Okafor is a victim of the modern NBA. If he were drafted 10-to-15 years ago, he’d be an All-Star. Back then, back-to-the-basket, traditional post-up centers were extremely valuable. But in today’s NBA, frontcourt players must be mobile, be able to guard multiple positions, and shoot from long range. Okafor doesn’t do any of those things particularly well. His old-school game is out of touch with the way the game is played now. He was drafted in the middle of the league’s three-point revolution and quickly saw his value plummet. He’s a dinosaur. Teams aren’t looking for the next Jahlil Okafor. They want the next Joel Embiid.

In his first year, he averaged 17.5 pointsa and 7.0 rebounds, and finished fifth in Rookie of the Year voting. But with his value diminished after three seasons, he was traded. Over the past two years, he’s played for three different teams. He’s found a home in New Orleans where he’s been a contributor.

Should have drafted: Jamal Murray (No. 7 to the Denver Nuggets).

Who? No worries. We barely remember this guy either. After the success the New York Knicks had with Kristaps Porziņģis, everyone wanted to find the next seven-footer with guard skills. Like Porziņģis, Bender was a tall, lean, and European teen. The Croatian posted promising statistics overseas, but wasn’t as polished an offensive player as Porziņģis. Still, there was plenty of potential for a guy that size who can run. Bender seemed like a perfect fit for the modern NBA.

Well, it’s still early and he’s still young (21 years old). He’s only started 64 games in his career. When you look at the 2016 draft class, only top overall pick Ben Simmons has reached an All-Star game. Right now, the Suns would settle for Bender being a reliable starter. He has yet to produce. Last year, Bender shot a career worst 21.8 from three-point range. He’s the only player on this list still with the team that originally drafted him. But time might be running out.

Should have drafted: Damian Lillard (No. 6 to the Portland Trail Blazers).

While Kansas is one of the most storied programs in college basketball history, it doesn’t have a great recent NBA track record. A lot of Jayhawks haven’t lived up to the hype. Joel Embiid is the exception. There are plenty of other lottery picks who have been disappointments: Andrew Wiggins (No. 1 overall in 2014), Josh Jackson (No. 4 overall in 2017), and Ben McLemore (No. 7 overall pick in 2013). At least those guys have all had at least one season of scoring in double figures. That never happened for Thomas Robinson. In fact, Sacramento got rid of him during his first season. According to ESPN, it was only the fifth time in the lottery era that a top-five pick was traded in his rookie season.

Robinson started only 12 games in his NBA journeyman career. At Kansas, the 6-foot-10, 237-pounder could outmuscle the opposition. But in the NBA, the former Big 12 Player of the Year was severely limited.

Should have drafted: DeMarcus Cousins (No. 5 to the Sacramento Kings).

Evan Turner was one of the biggest stars in Big Ten history. En route to winning 2010 conference Player of the Year honors, he led the league in scoring (20.4), rebounding (9.2), and was second in assists (6.0) and steals (1.7). He was considered one of the best all-around players in the draft. It was virtually unanimous that he was the second-best prospect in this draft behind on Kentucky’s John Wall. Turner was described as a taller version of Portland All-Star guard Brandon Roy.

For whatever reason, Turner’s skills never translated to the pro game. Philadelphia kept waiting for him to develop into a star than he never became. He’s been average at best. His inability to shoot (a career 29.6 three-point accuracy) has been a major hindrance. To his credit, Turner has hung around as a role player.

Should have drafted: Kawhi Leonard (No. 15 to the Indiana Pacers/ traded to San Antonio Spurs).

At 6-7, Williams was undersized, but his skillset had most thinking that he could play both forward positions. He shot an astonishing 56.8 percent from three-point range in his final college season. Williams was considered a smart, mature player who would enjoy a long career. There was buzz that the Timberwolves might trade the pick, but they took Williams even though they had a deep young frontcourt with Michael Beasley and Anthony Randolph.

In his second season, Williams (12 ppg) looked like he might develop into something special. There were a few cool highlight dunks between him and Rubio. But he never averaged in double figures again. Williams was traded after three seasons. After starting 56 games in 2012-13, he has never started more than 15 games in a season since. Williams last appeared in an NBA game two years ago as a member of the Los Angeles Lakers.

Should have drafted: Stephen Curry (No. 7 to the Golden State Warriors).

Jonny Flynn will forever be the answer to a trivia question: Who was the guy picked before Steph Curry? In a draft that produced six All-Stars – four of which came after the 6th pick – this really stings. Missing out on Curry was a decision that forever altered the franchise. Yes, other teams whiffed, but not quite like Minnesota because the Timberwolves had a chance to draft Curry twice. It also owned the No. 5 overall pick which it used to select Ricky Rubio. Minnesota, which didn’t have a pure ball-handler on its roster, doubled up on point guard prospects. Surely one of the two would work out.

Then general manager David Kahn said that the Curry family let it be known that Steph didn’t want to play for the Timberwolves. Curry said that his love of golf scared away Minnesota. Regardless, the franchise went with Flynn, who was talented and averaged 13.5 points as a rookie. But he suffered a hip injury and was never the same again. Curry has gone on to become the greatest shooter in NBA history, a three-time champion, and two-time league MVP.

Should have drafted: Klay Thompson (No. 11 to the Golden State Warriors).

Jimmer Fredette was the biggest star in college basketball. The National Player of the Year led the country in scoring (28.9) and wowed everyone with his long-distance shooting. Fredette got a ton of media attention and was a four-year player – both of those things helped elevate his stock. Sacramento acquired him from Milwaukee in a draft day trade with the hopes that he would sell tickets and be a marketable star to build the franchise around. At worst, he could be a reliable three-point threat – sort of the poor man’s JJ Redick.

Fredette had some moments as a rookie (7.6 ppg), but has only started seven games in his career. He’s bounced around the NBA and was out of the league for two seasons before being signed by the Phoenix Suns late last year. Interestingly, the player taken after Fredette, Klay Thompson turned out to be exactly the high-scoring sharpshooter that Fredette was supposed to be.

Should have drafted: James Harden (No. 3 to the Oklahoma City Thunder).

Yet another example of how much the NBA has changed within 10 years. There’s absolutely no way Hasheem Thabeet would’ve been a lottery pick in the current climate. Thabeet was severely limited offensively, but teams loved his height (7-foot-3) and his defensive potential. He was a shot-blocking menace who could dominate the paint. However, others said he had high bust potential because he was so raw and not physical. Thabeet was probably the most polarizing player on this list.

Thabeet’s best season was his rookie year (averages of 3.1 points, 3.6 rebound 1.3 blocks). He never got any better. He turned into a cautionary tale as to why you should never take a chance on an unskilled big man that high in the draft. Former Memphis guard Tony Allen said Thabeet’s poor habits and immaturity didn’t help. What made the Thabeet pick worse is that Memphis could’ve drafted future NBA MVPs James Harden and Stephen Curry.

Spent 2018-19: Played 19 games all with Philadelphia. Traded to Orlando Magic.

Should have drafted: Donovan Mitchell (No. 13 to the Denver Nuggets/traded to Utah Jazz).

The Markelle Fultz saga is one of the strangest in NBA history. The Boston Celtics originally had the No. 1 overall pick, but traded it to Philadelphia who had fallen in love with the freshman guard from Washington. The 76ers picked Fultz to be the third piece of a talented young core that included Ben Simmons and Joel Embiid. For reasons still not fully known, Fultz played only 14 games as a rookie. Originally, his agent said his client had a shoulder injury, but some were wondering if his 40.5 percent field-goal shooting and 47.6 free-throw shooting was more mental.

That mystery continued into last season with Fultz appearing in only 19 games. His production was roughly about the same in his second year. His agent blamed thoracic outlet syndrome. Whatever the real reason, the Sixers decided to move on. They traded Fultz to the Orlando Magic in February. He has yet to play for them.

Should have drafted: Giannis Antetokounmpo (No. 15 to the Milwaukee Bucks).

Anthony Bennett could be the worst draft pick in NBA history. Yes, even worse than Kwame Brown, the top overall pick in 2001. Hey, at least Brown played 12 seasons and his career VORP was -0.4.

In fairness to Cleveland, this was a year when no one wanted the top overall pick. The Cavalier tried to trade out of the slot for an established veteran. If Kentucky’s Nerlens Noel hadn’t torn his ACL during the college season, he likely would’ve been chosen here. So, the Cavaliers surprised everyone –including Bennett – by taking the 6-foot-8 power forward.  Bennett had the reputation of being a good athlete and was expected to complement Cleveland’s young star guard Kyrie Irving.

Bennett was bad from the jump, failing to start a single game as a rookie for a bad team. His first year is arguably the worst ever for a No. 1 overall pick. His player efficiency rating of 4.6 was by far the worst of any player drafted first over the past 20 years. Bennett was overweight, out of shape, and bad. Cleveland traded him to Minnesota in the Kevin Love deal after one season.