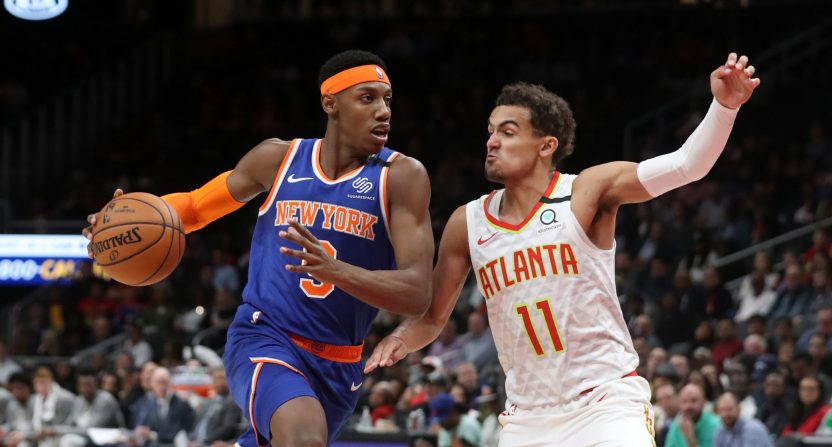 It’s playoff time. Let’s examine some of the most interesting tactical storylines in what should be the most competitive opening round matchups.

The Milwaukee Bucks will have to deal with the Miami Heat in the first round. That is unideal for Giannis Antetokounmpo and co., who of course had lots of trouble with them last year in the bubble. But a lot has changed since the Heat beat the Bucks in five in Orlando. Jrue Holiday gives the Bucks a third star. He’s a scoring ball-handler with playoff experience and arguably the best non-Ben Simmons guard defender in the league. Miami lost Jae Crowder and Kelly Olynyk and replaced them with Trevor Ariza and Dewayne Dedmon. That … feels like a downgrade.

But Ariza has been solid since arriving via midseason trade, shooting 35 percent from three on high volume and playing good defense. Jimmy Butler has kept up his bubble level and should make All-NBA second team. Bam Adebayo has made another leap, particularly as a midrange jump shooter. The Heat still have the tools to give Giannis and by extension the Bucks serious problems.

Milwaukee took steps in the regular season to avoid another playoff disaster. Most notably, they’ve increased their familiarity with multiple defensive coverages in an effort to be more flexible when it matters. Their drop coverage style works brilliantly in the regular season, but it has been exploited in the playoffs, so Mike Budenholzer has had them switch and trap sometimes throughout this season.

They’ve shown an inclination later in this regular season to move away from Brook Lopez in clutch minutes. Lopez is the leader of the drop coverage defense; he’s a less switchable center who excels at rim protection. It’s likely that they would have an easier time corralling Butler and swarming Adebayo’s rolls to the hoop with a more flexible defensive lineup. That’s where PJ Tucker, Houston’s longtime switch king, could play a huge role. Tucker seems likely to see big minutes guarding Adebayo.

Giannis’s role should be as a help defender. His length and instincts have not been fully weaponized given his potential effectiveness as a free safety and his ability to guard every position. He may not lock down Butler, but he can cover significant ground and singlehandedly destroy offensive sets. The Bucks have to maximize his defensive talents.

Can Denver make a run without Jamal Murray?

Murray’s torn ACL is one of the most unfortunate NBA injuries in recent memory. For a franchise like Denver to lose its second star in a year in which they looked like legitimate championship contenders is a blow.

But Nikola Jokic has not slowed down. He solidified his MVP case by leading the Nuggets to a 13-4 record in the 17 games played after Murray went down on April 12 (not including the tanktastic finale). Jokic averaged 27 points, 10 rebounds and seven assists in that span.

The Nuggets now appear to be fully healthy outside of Murray and PJ Dozier, a quality wing defender who went out in early May.

It’s Denver’s secondary scoring and shooting that poses the most questions. Michael Porter Jr., who has been flamethrowing all season, will have to perform like a star if the Nuggets are going to win this series. It would be a great help if Aaron Gordon can create his own offense, because Denver’s guard situation doesn’t look like enough. How much offense can Monte Morris, Austin Rivers, and Facundo Campazzo provide?

A lot will be on Jokic’s shoulders. His pick-and-pop efficiency will be a key to getting consistent buckets, especially late in games. The Blazers will send doubles, and the supporting cast has to be ready to make the right reads.

On defense, it will be interesting to watch how Jokic fares defending Damian Lillard’s high pick-and-rolls. Jokic has become a capable defender, but Lillard forces centers to play contain at the three-point line, a difficult assignment.

We’ve been waiting to see how Trae Young looks on defense in the postseason, and how the Knicks plan to attack him on that end of the floor has been the more talked about storyline. But how Young orchestrates offense against the defensive-minded Knicks is just as intriguing.

The Atlanta Hawks look well-built to handle the Knicks overall. With De’Andre Hunter back, they add defense and scoring, and the three-point shooting of Young, Bogdan Bogdanovic, Danilo Gallinari, John Collins, and the red-hot Tony Snell could be the perfect foil to Thibodeau’s dominant defense, which is typically willing to concede threes.

Atlanta’s offense is built around Young pick-and-rolls, but the Knicks can throw a number of looks at him. It will be interesting to see whether they put the length of RJ Barrett on Young from the start, or go with a mix of smaller players like Elfrid Payton, Derrick Rose, and Immanuel Quickley. Young’s efficiency dipped in the regular season, but his ability to make quick passes and get others involved will go a long way toward breaking through a hard-working Knicks defense that excels at scrambling.

In the play-in win over Golden State, Frank Vogel cut the LA rotation down, which could be a sign of things to come. When it comes down to it, they have seven core players: LeBron, Anthony Davis, Kentavious Caldwell-Pope, Alex Caruso, Dennis Schroder, Kyle Kuzma, and Wesley Matthews. Some combination of those seven players will form their closing lineup in the playoffs.

LEBRON! WHAT A SHOT! 🔥🔥🔥 pic.twitter.com/iohQ0xIYj1

Davis doesn’t want to play full-time center. But it’s clear that the Lakers perform much better when he plays without Andre Drummond, Montrezl Harrell, and Marc Gasol. Davis, who is dealing with a couple of ailments that seemed to affect him against Golden State, is at his best when he’s taking combining jumpers with rim attacks, getting to the line, and a drive-and-kicks game. Putting him at the five spaces the floor and allows Davis to be used as the primary roller for LeBron.

During their title run last year, the Lakers mostly pushed Javale McGee and Dwight Howard to the bench, with Howard backing up Davis at center and starting occasional games depending on matchups. A similar arrangement should happen this year. Harrell is useful as a backup center barring a difficult defensive matchup. If Vogel wants size, Gasol is clearly capable, and it’s not clear why Vogel has been so hesitant to use him.

There isn’t really a reason to play Drummond, though. He theoretically fills the same role as McGee and Howard, as a roller, rim protector, and vertical spacer, but the Lakers don’t have a need for that type of player in the playoffs. Drummond, a subpar defender and atrocious finisher, makes a lot of mistakes, ones that McGee and Howard didn’t.

Opening the floor for LeBron helped considerably against Golden State. He isn’t at one hundred percent yet, making it difficult for him to dominate at the rim the way he usually would. He had an easier time when the floor was spaced in the second half. In addition, the secondary players see more space to attack closeouts and make cuts. That’s an important source of extra offense for a Lakers team that needs it. Kuzma and Caruso are particularly smart cutters.

In a difficult first-round series against the Suns, Vogel has to be aggressive from the start. He benched Schroder for Caruso in the fourth quarter against the Warriors for defense on Steph Curry, and a similar move could make sense against Chris Paul. Matthews could also get big minutes as a veteran wing defender and willing shooter who makes the right plays.