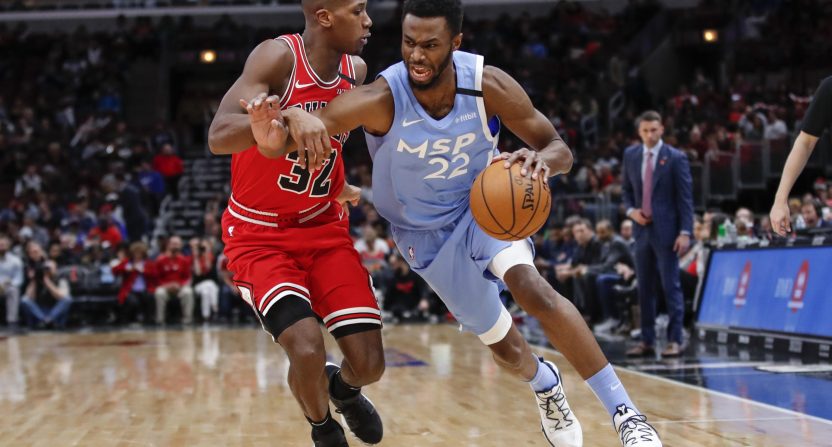 At one point earlier this season, there were fears that this year’s NBA trade deadline would pass relatively tamely. The 2020 draft pool is light on talent, and a number of teams are hoarding cap space for the loaded 2021 free agent class. After teams with potentially valuable assets (the Thunder and Raptors, notably) outperformed expectations, a handful of players fell off trade boards. Bradley Beal’s extension prevented what could have been a competitive sweepstakes for the Wizards star.

Let’s run through the big takeaways:

The Heat look built for the playoffs

Miami proved to be the most aggressive team, and while they were ultimately unable to snag Danilo Gallinari from the Thunder, they outbid the Lakers for Iguodala and added Jae Crowder and Solomon Hill in the process from Memphis. They also added Gorgei Deng from Minnesota, helping their big depth after Meyers Leonard’s recent injury.

For the price of Justise Winslow, Dion Waiters, and James Johnson, the Heat secured depth on the wing and a veteran playoff contributor. It may take time for Iguodala to get back in the swing of the NBA after a sabbatical, but even if he’s not where he was with the Warriors, he will provide smart passing in transition and stout defense. For a young team giving Duncan Robinson, Kendrick Nunn, and Tyler Herro big minutes, Iguodala’s skillset is clearly valuable.

Crowder has been very bad from three this season (29 percent on five attempts per game), so Erik Spoelstra will probably tell him to tone it down on the deep shots. It’s fair to question the value Crowder provides right now — he is a physical defender who can do a job on that end, but ESPN’s defensive real-plus minus doesn’t like him this season, and he won’t do a ton on offense if he’s not making threes, something he’s never really done. Alongside Hill, who is making threes at a solid rate, Crowder is fine as a veteran depth acquisition.

The Heat are fourth in the East right now, within striking distance of second and third. They have the pieces to be a serious threat in the playoffs. Jimmy Butler drives winning at a high level: he defends with purpose, grabs steals, cuts to the hoop, and gets buckets on demand. Bam Adebayo is an All-Star, averaging a double-double and facilitating the Heat’s offense from the center position. The younger guys orbiting the two All-Stars shoot efficiently and move the ball well.

With Adebayo playing physical defense, Miami could cause Giannis Antetokounmpo problems in a playoff series. It seems like Pat Riley is confident in this Heat team. The additions they made at the deadline could push them into true Eastern Conference contender.

Detroit moves on from Andre Drummond

The rebuild is on in Detroit, where the Pistons finally dumped Drummond to the Cavaliers. It was clear that Drummond had little trade value, and the minimal return bore that out, but it made sense for Detroit to cut bait anyway; they were likely going to lose Drummond in the offseason, as he is expected to decline his player option.

It’s a reasonable move for Cleveland, given the Cavs are on a road to nowhere and it cost them basically nothing. Drummond puts up nice box score numbers, though his impact on winning is debatable. As a dinosaur center, he is most useful in a secondary rim-running and rebounding role. He’ll give the Cavs’ young guards a competent scorer in the paint.

Detroit will have cap space this summer, which they can use to take on other teams’ contracts and draft picks. They have some interesting young guys, including Christian Wood, whom the Pistons chose not to trade this week. It’s time to settle down and see what they have.

Timberwolves get their man

Minnesota has had a massively disappointing season. They’re second-to-last in the West, far off the playoffs, and it’s not unreasonable to speculate about Karl-Anthony Towns’s level of satisfaction. The Wolves have to find a way to keep their star happy.

Trading for D’Angelo Russell, a noted friend of Towns, is a good way to do that. Minnesota cut bait on Andrew Wiggins, dealing him along with a top-three protected 2021 first-round pick and a 2021 second-round pick to Golden State for Russell, Jacob Evans, and Omari Spellman. That 2021 pick, which converts to an unprotected 2022 pick if not conveyed, could prove very valuable to the Warriors.

Getting rid of Wiggins’s cumbersome contract, in addition to acquiring an All-Star level point guard to pair with Towns, is a huge victory for Minnesota. The Russell-Towns pick-and-roll will be fun to watch and tough to defend, given how much teams have to honor Towns’s ability to pick and pop.

Defensively, the Wolves’ two stars will not exactly perform at a high level, but the Wolves have two stars now. Perhaps they will be able to entice another to join them. If it’s Devin Booker somehow, every Wolves game will finish 150-140. Find a way!

The Clippers landed Marcus Morris, a really nice coup. Morris’s shooting, playmaking, and size on defense fits perfectly with their needs. The task now for Doc Rivers is figuring out how to fit all of these guys on the floor, and distribute minutes effectively among so many solid players.

Issues at center with Ivica Zubac and Montrezl Harrell could mean Morris gets some time at the five, if Rivers decides it is necessary. Other times Morris will be coming up with scoring for bench units when Kawhi Leonard and/or Paul George sit. As a consistent three-point shooter, Morris can be a perfect floor-spacer, perhaps in closing lineups alongside Leonard, George, and two of Harrell/Zubac, Lou Williams, or Landry Shamet. This is a deep team, with a ton of perimeter defending and scoring. The Lakers, without a first-round pick to trade, stood pat, and now will hope that Darren Collison comes out of retirement. Thursday was a big step forward for the Clippers.

Interestingly, the current top two in the East did not do anything at the deadline. Milwaukee, in particular, had been bandied about as a trade contender given the urgency of winning now with Giannis, but it’s hard to break up their current 11-deep roster, and risking the chemistry might not be a great idea. The Bucks will ride with what they have, unless they’re active somehow in the buyout market.

Toronto, who have gotten some impressive production out of various unlikely sources this season, also refrained from any moves. With Indiana also sitting still, and the Sixers only making moves around the edges, the race in the East’s 2-6 range will only get more interesting.