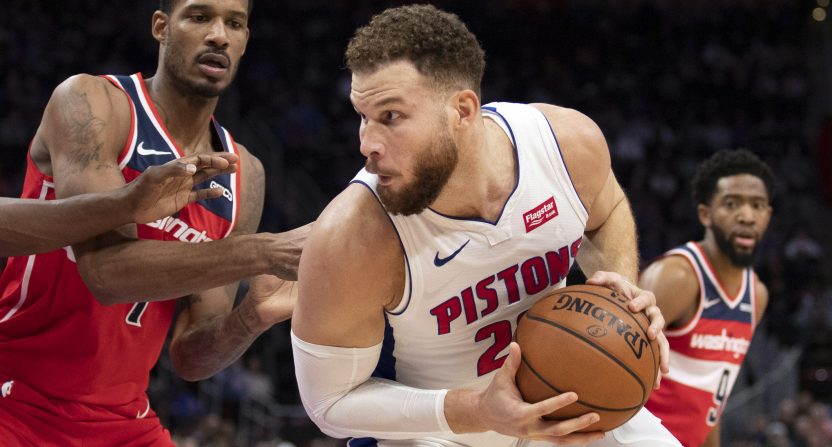 At the bottom of the NBA’s “junior varsity” conference, a five-team race (maybe six, depending on your feelings about the Wizards) for three playoff spots is developing.

The Heat, Hornets and Pistons hold the spots now, with the Nets and Magic a half-game back of the Pistons’ eighth spot. Comparing this race to that of the opposite conference does not make these five or so teams look great; the East’s status as the vastly inferior NBA division has only grown more concrete this year.

Only a couple of legitimate stars reside below fifth in the East. Kemba Walker, emerging in the MVP race, and Blake Griffin, quietly excelling in Detroit, are clearly among the top tier in their positions. Loose cases could be made for Andre Drummond and Bradley Beal (or John Wall, though heel surgery rules him out for the year), but no one else comes close to qualifying.

Walker and Griffin, especially poor Kemba, operate basically by themselves. And the Heat, Nets and Magic are mishmashes of young, old, competent and incompetent. None of these teams in real contention to fill out the East’s top eight seem cohesive, or have some higher, unrealized ceiling barring (a lot of) reinforcements. Some are in long-term salary cap hell.

Charlotte rely on a variety of contributors to supplant Kemba. In that wacky double overtime game in Brooklyn last week, 20-year-old shooting guard Malik Monk was tasked with scoring on a crucial late possession, and he lost the ball on an attempted crossover. The highly-paid Nicolas Batum goes long stretches standing on the perimeter. Anyone able to score on their own (Jeremy Lamb, Tony Parker, one of the big men) immediately transforms into the second scoring option.

Non-Kemba lineups, evidently, do not fare well. When Walker sits, the Hornets score nearly seven fewer points per 100 possessions and give up five more.

That Charlotte sit sixth in the conference is a testament to Walker. He’s touching the ball more (with a career-high usage percentage), and per Basketball Reference, he’s sixth in offensive box plus-minus, a measure of points produced compared to a league-average player. He’s scoring nearly 26 points per game, a career high.

Detroit have lost 12 of their last 16 games, including an ugly 125-88 blowout at the hands of the Pacers on Friday. They’re similar to the Hornets in their salary cap struggles: The Pistons are locked to Griffin and Drummond through 2022 and 2021, paying big figures to each. They’ll be paying Griffin nearly 37 million by 2020, and Drummond could earn 10 million less if he accepts a player option for 2020. Further millions are tied up in guards Reggie Jackson and Langston Galloway.

According to Spotrac, the poor Pistons are still paying out dead money to Josh Smith, who last played for the team in 2014. They are forever plunged in some cap malaise.

Sorting out Griffin and Drummond’s fit is Dwane Casey’s more immediate concern. Griffin has been a beast this year. Drummond is leading the league in rebounds, but he hasn’t always looked effective playing alongside a ball-dominant big man. It’s hard to expect him to, considering he’s a rebound-inhaling center having his space crowded by a versatile 6’10” power forward. It was never going to be seamless.

Brooklyn and Orlando are younger, and thus play with less immediate stakes than Detroit or Charlotte, who are basically resigned to mediocrity at this point. The Nets have seen Spencer Dinwiddie rise off the bench since Caris LeVert’s injury, with D’Angelo Russell and Jarrett Allen playing good minutes for a team only a game out of the eighth spot.

Allen is swatting everyone at the rim, and Joe Harris (recently signed to a well-deserved extension) is shooting 48 percent from 3. Young guys are getting playing time alongside veterans like Jared Dudley and Demarre Carroll. It might not be enough this season, but there is some promise scattered about in Brooklyn.

Orlando is farther away, though a 16-20 record for the Magic going into the new year is enough to raise eyebrows on its own. They are counting on continued improvement from Jonathan Isaac and Mo Bamba, the two young and stretchy big men trying to fit on a team with little of the sort.

Nikola Vucevic, suddenly, is a borderline All-Star, averaging 20.3 points per game. The Magic are +2.7 when Vucevic is on the court and -14.2 when he sits, with their offensive rating dropping to a paltry 93.4. The numbers are similar for Aaron Gordon.

Their bench units tank. Bamba and Terrence Ross have the second-worst net rating among qualifying two-man units, behind only the Cavs’ Collin Sexton and Cedi Osman. Ross and Jerian Grant are also among the worst pairs in the league, per NBA.com. They need Vucevic and Gordon to continue producing at high levels to avoid plummeting.

The Heat look likely to make the postseason, with a scrappy group of NBA-quality players. They don’t have a star, but they do enough right to win games in this Eastern Conference. Despite a rough start, they’re 17-18 and play stingy defense; since November 15, they’re fifth in the league in defensive rating.

This is all enough to be better than the disasters below them — the Cavs, Knicks, Bulls and Hawks are outright tanking, and the Wizards can’t seem to do a whole lot right. Somehow, it could be argued that 14 of 15 Western Conference teams are better than the East’s entire bottom 10. Only the Suns are tanking out west. Everyone else is trying to win, at least.

The fact remains, though, that three of these lower-level East teams will make the playoffs, whether they’re actually good or not. Either way, it’ll be entertaining.