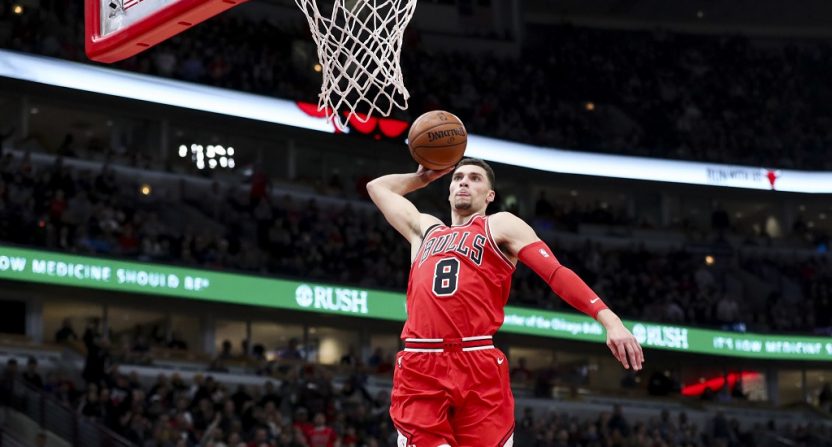 On Friday night, it was reported that the Sacramento Kings signed restricted free agent Zach LaVine to a four-year, $78 million offer sheet, giving the Chicago Bulls 48 hours to match.

After being “disappointed” in the Bulls, Bulls restricted free agent Zach LaVine tells @TheUndefeated he has signed a four-year, $78 million contract with the Kings. Link here:

And it didn’t take long for news to break that the Bulls had indeed chosen to match the offer sheet.

This news isn’t all that surprising… when you consider how the John Paxson, Gar Forman-led Bulls’ front office operates.

The Butler deal is a sunk cost. It’s over. Matching the LaVine offer sheet just because you don’t want to lose an asset from a past trade isn’t good business if the price is too high.

Chicago acquired LaVine in the Jimmy Butler trade last offseason with the Minnesota Timberwolves. LaVine was recovering from a torn ACL at the time of the trade, and didn’t make his Bulls debut until January 13. Despite returning from a serious knee injury, LaVine’s athleticism didn’t take too long to look fine.

And, as LaVine has always done, he gave flashes of his Kobe-esque offensive skills on occasion.

But he’s also been a shockingly bad defender in the NBA, despite elite athletic traits (a reminder that defense is as much about effort and instincts as talent). And even with his tremendous offensive *talent*, the metrics have found him to be a highly inefficient offensive player to this point. LaVine’s 14.65 Player Efficiency Rating in 2017-18 ranked 51st for guards.  He’s a shoot-first guard that can put up points, but while shooting 38.3% from the field in 2017-18, for example. The tantalizing skills and upside don’t match what the advanced stats say to this point.

Related: The Kings just signed him to an $80M offer sheet.

Now, the upside is absolutely there for LaVine to make a big jump and perhaps even become a star eventually. But odds are he stays closer to the player he’s been so far. That’s a fine player that is capable of taking over a couple games a month when he gets hot, but it’s not a $20 million/year player, and that’s what the Bulls have decided he is.

Can the Bulls confidently feel LaVine will be a major piece to help them reach title contention over the next four seasons? Because that’s really the only question they should’ve been asking themselves here. They’ve put a ton of valuable resources into this move and it could limit what they’re able to do in the upcoming offseasons. They could also use another season of tanking, after their effort to do so went poorly this past season and they ended up with Wendell Carter Jr. in a draft that included what appear to be a few franchise-changing talents. Even if LaVine’s flaws continue to show, he likely still adds a few more wins to the Bulls in 2018-19 than the alternative options would’ve, so he’s probably going to hurt their efforts to get a high draft pick next year.

If LaVine comes anywhere close to reaching his potential, this deal will look quite fine and the Bulls have a few intriguing pieces going forward with LaVine, Lauri Markkanen, and Carter (and maybe Kris Dunn). But if he stays the player he’s been, the Bulls likely aren’t any closer to winning a title, and they’ve hurt their ability to add talent to accelerate that, while also likely being too good to tank!

This all feels like it’s headed for the worst territory to be in the NBA: the middle. After the Bulls’ disastrous Dwyane Wade/Rajon Rondo offseason two years ago, you’d think they would’ve learned to do everything possible to not get back in that same place. Either confidently be on the path to title contention, or be very bad and help your chances to find stars in the draft.