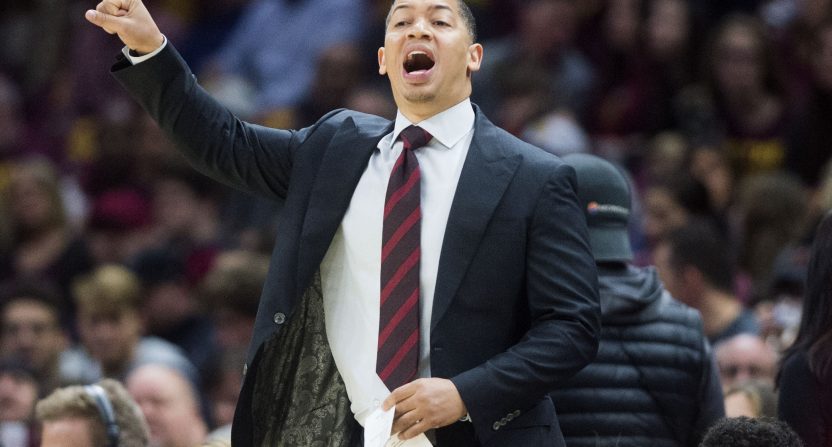 The Pacers handled a Kevin Love-less Cavs team in Cleveland last night, meaning in Cleveland has now lost their first six games in the wake of LeBron James leaving for Los Angeles.

Today, the Cavs fired Lue, who as a head coach had never missed the NBA Finals, and he was obviously on the sidelines when Cleveland won the 2016 championship. From ESPN:

“My time here in Cleveland was truly special,” Lue said in a statement. “I am very grateful for the dedication, sacrifice, and support of all the players on our team, the tremendous coaches I worked with and of course, our incredible fans. Lastly, deep thanks to Dan Gilbert, David Griffin and Koby Altman for the opportunity over the last three years and I only wish the organization success moving forward.”

[Likely interim coach Larry] Drew was meeting with management on Sunday morning to discuss terms of a promotion to interim coach, league sources said. It is possible he’ll seek a more permanent appointment. Drew was 8-1 as the interim coach a year ago when Lue was sidelined with illness. He led Atlanta to the playoffs in each of his three years as heads coach and spent one year at Milwaukee’s head coach in 2013-14.

This was probably inevitable, given how fractured the parties involved were. LeBron’s exit created a power vacuum, with GM Koby Altman and owner Dan Gilbert seeking to take the franchise in directions that aimed for the future, while Lue apparently wasn’t as aggressive about handing things over to younger players:

Sources told ESPN’s Brian Windhorst that Lue recently had a disagreement with general manager Altman over playing veterans. Altman preferred that Kyle Korverand JR Smith be taken out of the rotation to give time to younger players. After one game in which they didn’t play, Lue put both back in the rotation without consulting Altman.

Gee, why in the world would LeBron want to leave? It is funny that Gilbert, who has for so long resisted the idea that LeBron made the Cavs (despite that exact fact having already been proven once before now), would be willing to essentially admit that this last cycle of franchise-best success was LeBron’s doing. Why else would you fire the coach in charge during that time, unless you’re admitting they were winning in spite of him?

Granted, Lue didn’t do himself many favors, and there was a chance Gilbert and Altman had been down on him already.

Tbh, I’m not sure Lue would have lasted the off-season if LeBron stayed.

Lue’s team struggled last season, though coaching LeBron is a tough task for anyone, and doing so with a roster that required massive rebuilding mid-stream is also not easy. Could he have reinvented himself into a rebuild manager, as Erik Spoelstra did in Miami after LeBron’s last exodus? Maybe, maybe not.

But Cleveland is in for a very rough season, no matter who’s on the sidelines. Lue gets a nice payday here to not spend the winter losing games in Cleveland and trying to motivate J.R. Smith, while Cleveland’s front office and Gilbert come out looking as though they have no idea what they want to do now. LeBron, though, looks the best; he took essentially this roster to the NBA Finals last season, and now they might end up at the top of the lottery once again.

Of course, that’s good for them; if they pick outside the top ten, their first-round choice goes to Atlanta anyway.

Lue, though, gets paid, gets out, and has a ring. He won’t be the only person to leave Cleveland that way this year, either.