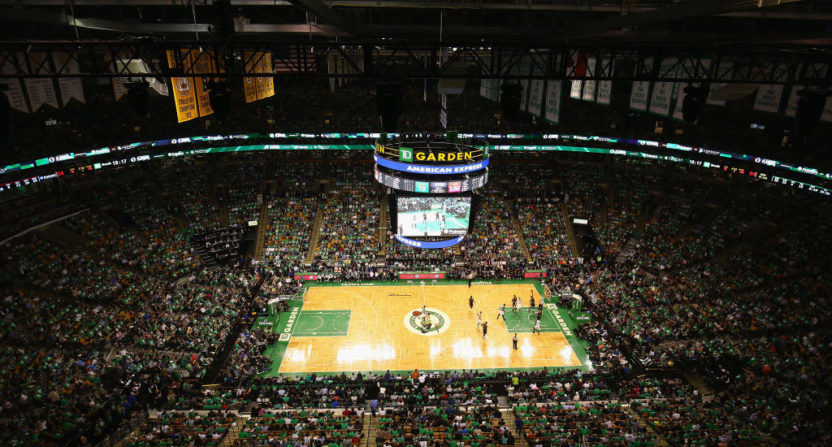 In recent weeks, an influx of high-profile incidents involving African-American NBA players and opposing fans hurling offensive or racist taunts at them has reached a fever pitch.

The Utah Jazz has been at the forefront of the pushback, having banned not one but two fans for life from their arena following such incidents.  First, they permanently banned one fan over “excessive and derogatory verbal abuse” towards Russell Westbrook during a recent game in Vivint Smart Home Arena. A video showed Westbrook reacting to the fan saying, “Get down on your knees like you used to.” When another video was uncovered showing a different fan referring to Westbrook as “boy” during last year’s first-round playoff series between the Thunder and Jazz, that fan was also banned.

Seemed as though the precedent had been set. If you say something obscene or racist to a player, you forfeit the right to enjoy watching NBA games in that arena. Being able to afford quality seats to an NBA game is most certainly a privilege, not a right. And while it’s one thing to say an opposing player “sucks” or boo them, it’s another altogether to dehumanize them just because you think you can.

So with the news that a Boston Celtics fans said the n-word to Golden State Warriors player DeMarcus Cousins during a January 26 game in TD Garden, according to Chris Haynes of Yahoo Sports, you might assume the Celts to follow suit. And the franchise certainly did ban that fan…to a point. The fan was banned from TD Garden for two years, which includes the remainder of the 2018-2019 NBA season.

“During that game, there was a fan who muttered the n-word at DeMarcus Cousins,” says Haynes. “I was told DeMarcus informed one of the team security guys and they got ahold of the security team there at TD Garden. They took care of the fan, but I was told that ultimately that that fan was banned for the rest of this season and next year.”

Whether you believe it or not, Boston sports fans have a bit of general reputation when it comes to racism and it’s not a good one. There have been plenty of well-documented incidents involving fans and racist chants in various Boston sports and that reputation seems to get re-debated every few months following another incident or mention in pop culture.

So when given the chance to follow in Utah’s footsteps and ban a racist fan for life, why not just do that? Why not just cover your bases and make sure the very clearly racist person can’t come back in the near future, don your franchise’s jersey, and mutter the n-word again? This isn’t really the time to worry about second chances or giving people the benefit of the doubt. Buying your ticket comes with certain basic understandings and if you violate those understandings there’s no real reason to care about giving you a chance to make up for it at a later date.

And as you might imagine, the fact that the Boston Celtics were the ones to go easy on a racist fan was not lost on people…

2 years and what else? @celtics went soft on a racist. https://t.co/XUP4zAx54m

Much respect for @utahjazz for getting it right because as expected, @celtics clearly can’t. I’ve seen it for years through social media, gaming, having family there and visiting that Boston is one of the most racist towns in America. https://t.co/7uu8McjcHd

Fucking ban him for life. Every organization has some shitty racist fans, I’m not gonna feel guilty by association on that. The Celtics handling this by banning him for 2 years? That has me embarrassed as hell to be a Celtics fan. https://t.co/3QfypblZce