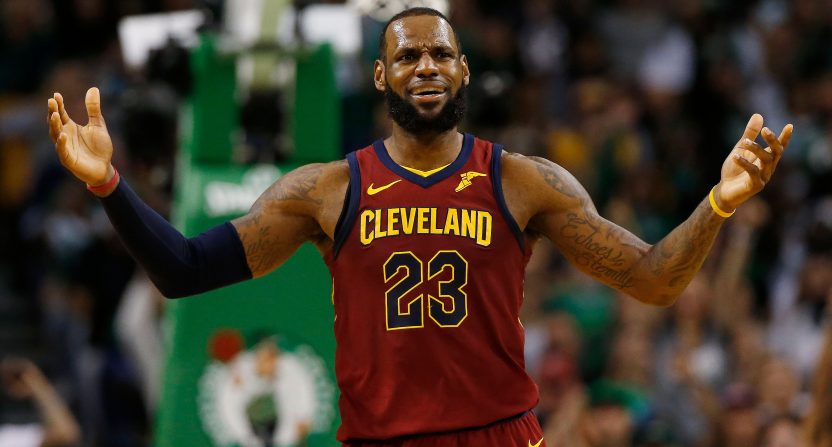 The Boston Celtics are missing two of their three best players in Kyrie Irving and Gordon Hayward. The Cavs have LeBron and a healthy (if perhaps ill-conceived) roster, and they just beat the top-seeded Raptors so bad Toronto has already fired head coach Dwane Casey despite, you know, having a season good enough to be the top seed.

Today, though, Cleveland looked much more like the Cleveland we saw in their opening round battle against the Pacers, as Boston handed it to the Cavs 108-83. In fact, it was eerily similar; game 1 of that series included a one-sided beatdown of Cleveland, with a disinterested LeBron and a struggle from most of Cleveland’s supporting cast. Of note, disinterested LeBron still recorded 15 points, 9 assists, and 7 rebounds. But he also had 7 turnovers and finished the game -32 in a 25-point loss.

The Pacers dominated the series, really, finishing with a very big win from a point-differential perspective, but losing four close games. (Also, there’s a world where the Pacers are playing an undermanned Celtics squad for a chance at the Finals, which would have been a hell of a story, says the Pacers fan who definitely isn’t still bitter about it.)

So there are a few things you can take away, depending on how you view it. You could look at today’s lopsided game and point out that Cleveland did just this against Indiana, a team probably about as talented as this current Boston group, and still managed to pull out the series. They also lost that opening game at home, as opposed to losing at Boston in a game that was always going to be tough to win anyway; Cleveland’s path to a victory likely always required winning all three at home and trying to steal a road game.

You can also look at it another way, which is that Cleveland probably should have lost that opening round series to Indiana, and Boston, while perhaps equal in talent to the Pacers, has a massive edge in the coaching department. If Brad Stevens was coaching the Pacers, Indiana probably wins that series. Boston isn’t going to give up an edge in this series, and that could be a very bad thing for Cleveland’s chances.

Or you can look at it as confirmation that the Western Conference Finals are, moreso than normal, the true NBA Finals. That series tips off tomorrow night, and it should be a lot of fun, and whether it’s Golden State or Houston that emerges, they’re going to be massive favorites over either of these teams, especially if a non-LeBron team makes it.

Whatever your takeaway, though, the facts are simple: Boston housed Cleveland, and unless something changes, this could be a very short series.