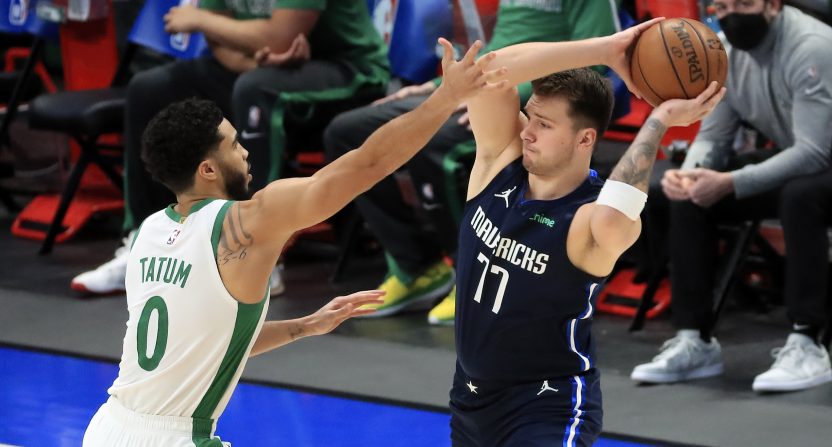 It’s a quiet time in the NBA offseason, with free agency settled and the trade market on pause. That means it’s a good time to evaluate how teams did in the offseason and how they might stack up before the season.

Let’s evaluate a few mid-tier contenders — teams that are trying to win right now, but remain on the outside looking in of true championship contenders. These are the swing teams, the ones who have star players and could potentially challenge the inner-circle contenders in the playoffs. If things go well, they could go deeper than we expect. See last year’s example of the Phoenix Suns and Atlanta Hawks.

The Boston Celtics, Dallas Mavericks, and Portland Trail Blazers fit this description. They’re similar in their urgency, their recent playoff shortcomings, and their hopes for something better.

After an injury-riddled 2020-21 season, the Celtics changed a lot in the offseason. They brought back Al Horford and Enes Kanter in the hopes that they can turn back the clock. They jettisoned Kemba Walker and Evan Fournier, and brought in Dennis Schroder and Josh Richardson as essentially their replacement guards. They also had to replace Brad Stevens as coach with Ime Udoka, the former Nets assistant.

These moves are all reasonable. With Jayson Tatum and Jaylen Brown, the Celtics have the two stars they need to be a solid playoff team. Tatum and Brown get better every year. They recognized that their depth was shoddy, and they improved it this offseason. The Celtics have struggled with depth for most of the Tatum-Brown era, even when they were making the conference finals, and those issues became debilitating last year as they started to rely more and more on younger, unproven players.

With more solid NBA players entering the fold, in addition to the expected growth of players like Payton Prichard and Romeo Langford, the Celtics will have more consistent quality on the court. The question is whether they have the talent to compete with the best of the conference — the Brooklyn Nets, Philadelphia 76ers, and Milwaukee Bucks. At this point, barring an MVP-type leap from Tatum (not impossible!), they don’t.

Schroder was a shrewd pickup. He comes cheap, he’s solid at handling the ball and running the offense, and he plays good, hard point-of-attack defense. Richardson is more of a flier, after he struggled over the past couple of seasons with Philly and Dallas, especially on offense, but he remains valuable on defense. They re-signed Smart on a long-term deal, retaining the heart and soul of the team and one of the NBA’s best guard defenders.

The harsh reality, though, is that this team needs more if it’s going to compete for a top-three seed. If all goes well, their ceiling is probably avoiding the play-in round. They need something extra at either the guard or big man position — something closer to star talent. The secondary scoring around the stars remains weak, and a guard trio of Schroder, Smart, and Richardson isn’t solving that problem. They also continue to lack wing depth behind Brown and Tatum, a problem exacerbated by the departure of Semi Ojeleye.

The end game for this team should be finding either a third star or at least players who give you a multitude of skillsets to fit neatly around Tatum and Brown. The Utah Jazz successfully did this with players like Joe Ingles and Bogdan Bogdanovic, helping elevate them to the top seed. For now, the Celtics appear stuck right behind those top teams.

Portland is in a very weird position. Damian Lillard is in a holding pattern — he’s apparently not asked for a trade, but he almost certainly knows that this isn’t a championship team at this stage. The uncertainty of his situation left the Blazers with a sense of urgency this offseason to finally put something around their superstar, but little avenue to make the kind of leap that puts them where Lillard wants to be.

Having said that, I don’t mind their moves this offseason. Larry Nance Jr. arrives from Cleveland as a perfect fit, a solid forward who can defend, shoot, and pass. Nance is the kind of player that contending teams seek out, the kind that the Blazers have been missing for years. They also added a trio on the fringe: Tony Snell, who was quietly red-hot from three last year; Ben McLemore, a pure sharpshooter; and Cody Zeller, a solid backup big.

These moves won’t move the needle all that much, but they make the team better. There’s also some addition by subtraction happening, with Carmelo Anthony and Enes Kanter gone. For whatever offensive value they provided, they gave more back on the defensive end. A team with Lillard, CJ McCollum, and Norman Powell starting can’t afford such low-caliber defenders surrounding them.

As they have before, Portland projects as a respectable playoff team. It’s hard to build a stable defense when two small guards who aren’t good on that end are playing all the minutes. That doesn’t mean it’s impossible; their 2017-18 team finished sixth in the league in defensive rating, only to get swept by the New Orleans Pelicans in the first round.

Effort is part of it, and they need more of it on that end from everyone. Lillard, partially as a result of carrying such a heavy load on the other end, struggled on defense in their first round loss last year to the Denver Nuggets. The team overall needs a better defensive infrastructure. The hope is that new coach Chauncey Billups can provide that.

It’s unclear what the end game is. If they’re going to build a legitimate contender around Lillard immediately, they’ll have to trade McCollum. Is Ben Simmons the answer? Is it even a possibility? At this point, it might be their best answer. The clock is ticking, and time very well might be up before the end of the season.

The most significant upgrade for the Mavericks this offseason is going to have to be internal improvement, predominantly from Kristaps Porzingis. He was infamously invisible in their second straight first round loss to the Los Angeles Clippers, spending his time as a spot-up shooter and traffic cone on defense. Luka Doncic’s load was heavy, and he carried it with aplomb; his performances were nothing short of extraordinary, even with the full force of the Kawhi Leonard-led Clips defense devoted to him.

Even Doncic’s heroics were not enough, as the Mavs bowed out in seven. They’ve done little this offseason to improve. Their best acquisition was Reggie Bullock, a roving shooter with size who can defend. Bullock makes a lot of sense, and he should play a big role for them. But they swung and missed on Kyle Lowry, and now might be counting on fishing a 35-year-old Goran Dragic from the Toronto Raptors to finish up their offseason.

It appears that they’ve downgraded at coach, with Rick Carlisle out and Jason Kidd in. Time might have been up for the legend Carlisle in a drama-filled organization, but bringing in Kidd was questionable for a variety of reasons. Even if you can disregard everything else, and you should take a deeper look at yourself if you can, it’s hard to overlook Kidd’s unsuccessful coaching record in Milwaukee and Brooklyn.

A lot will be put on him, as the Mavs just signed Doncic to a supermax and will be urgently trying to get him a squad capable of going deeper in the playoffs. They don’t have that squad yet, though they will be good enough to get themselves back into solid playoff position. Rising above that will depend on whether Porzingis is able to be the second-best player on this team.