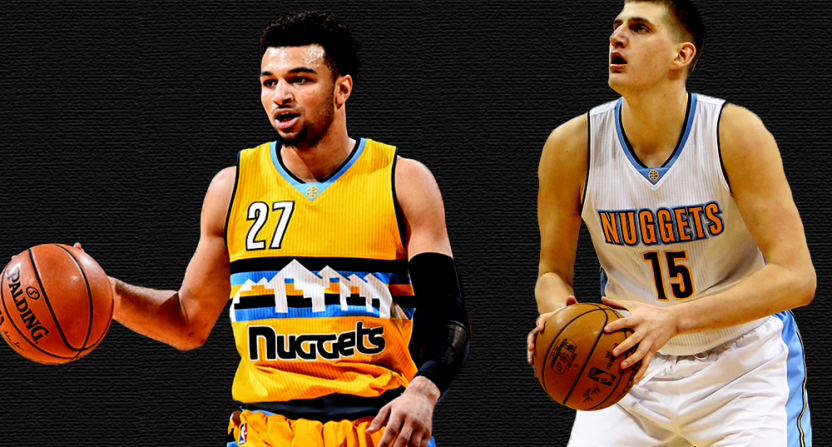 Looking atop the NBA standings, a new surprise challenger out of the Western Conference reigns supreme as we approach the midway point of the 2018-19 season. After missing the playoffs last season, the 26-12 Denver Nuggets have shown they’re poised to not just have a great regular season but build themselves to be NBA title contenders. So what makes the Nuggets so strong?

The Nuggets are led by their superstar center, Nikola Jokic.

At 23, Jokic has blossomed into one of the game’s most exciting players. Checking in at 7’0″, 250 pounds, Jokic might look chubby and unathletic but he’s a unicorn on the court. He can score in the post, rebound at an elite clip, and shoot the ball from deep.

What’s really special about ‘The Joker’ is his passing. He’s a wizard with the ball. Jokic’s got absurd court vision for a big man and makes passes that some of the best point guards wouldn’t try. He consistently hooks up guards at the three-point line with wide open looks.

Jokic’s passing takes pressure off of Jamal Murray, who has shifted from shooting guard to point guard since the Nuggets don’t have a natural PG among their starters. Murray’s swagger and penchant for pissing off opposing players is a joy to watch.

The knock on Jokic is his defending. He’s slow and isn’t a great rim protector. It’s not for a lack of trying, however. Still, his offensive output greatly makes up for his defensive weaknesses. Jokic is a beast.

Because of that, the team makes up for Jokic’s weaknesses on defense while Jokic makes up for Denver’s weaknesses on offense. Denver ranks as a good, but not great offensive squad, the team’s defense might be its strongest weapon. After multiple seasons of mediocre D, coach Mike Malone has turned the Nuggets into a capable, above average defensive unit.

Denver’s defense ranks in the top-10 in the league in defensive rebound percentage (74.5%, 4th), points off turnovers (15.6 PPG, 8th), fast break points against (12.1 PPG) defensive rating (106.9, 9th), and second-chance points against (12.4 PPG, 9th). Millsap, small forward Torrey Craig and center Mason Plumlee (finally healthy) stand out on the defensive side. Through 38 games, the Nuggets defense has allowed 105.7 points per game, the third fewest in the league. I wouldn’t call the Nuggets an elite defensive squad, but as unlikely as that was in previous years, it’s been a huge plus for them.

What’s been admirable about the Nuggets’ rise to the top is the fact they’ve done so while leading the NBA in man-games lost to injury.

Millsap and Harris both missed extended time with injuries. Meanwhile, Will Barton, one of the team’s best scorers and starting small forward has been sidelined since the second game of the season with a groin injury. To top it off, point guard Isaiah Thomas still hasn’t played a game in 2018-19 and first-round pick Michael Porter Jr. hasn’t made his debut with lingering back injuries.

Ten different players have started for Denver as the team has really embraced the next man up mentality. Power forward Juan Hernangomez, Plumlee, and Craig have been inserted into the starting lineup and provided mostly positive results.

Point guard Monte Morris, a second-round pick in 2017, has seen his minutes triple and has been one of the best backup lead guards in the association. Malik Beasley, a 2016 first-round pick who played sparingly before this season, has emerged as a very good three-point shooter and scorer off the bench. 23-year-old Trey Lyles has also shown flashes of brilliance off the bench before sputtering in December. The team’s depth has been tested and is only going to get better as players get healthier.

The Western Conference is ridiculously competitive. However, with Jokic leading the charge, the team playing very good defensively and key players like Barton coming back from injury while others get healthier, there’s reason to believe the Nuggets are legit contenders. Are they the best team in the NBA? Right now, probably not. But they’ve earned a right to be in the conversation. Not bad for a team that didn’t qualify for the postseason last year.