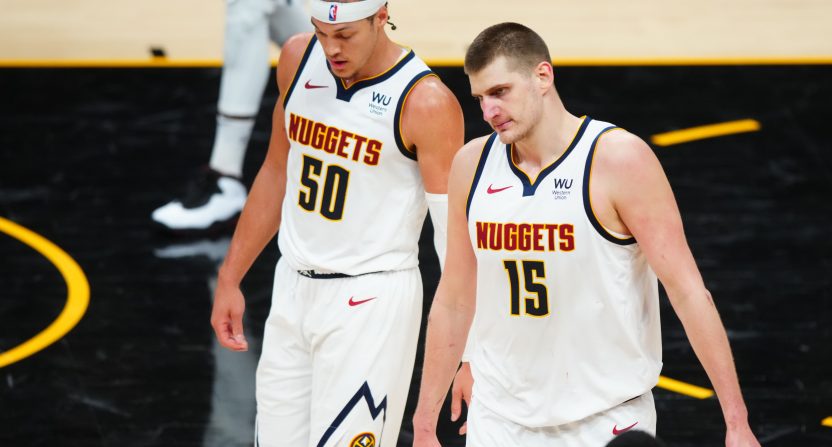 eWhen Nikola Jokic picked up a Flagrant 2 foul and walked out of Sunday’s Game 4 against the Phoenix Suns, it didn’t change the outcome of the series. The Denver Nuggets were already down 3-0 and on the verge of getting swept. But it was a disheartening ending for what might have been Jokic’s defining campaign — a season in which he played every game, averaged career-highs in most statistical categories, and won league MVP. His co-star, Jamal Murray, had to watch the playoffs from the sidelines in a sweatshirt.

There was a brief time this season in which the Nuggets were consensus Finals contenders. In the immediate stretch after the Nuggets acquired Aaron Gordon from the Orlando Magic, Denver won seven straight games, including wins over the Atlanta Hawks, Philadelphia 76ers, and Los Angeles Clippers. The Nuggets looked close to flawless.

Murray was hitting an All-Star level in the regular season as he built toward the playoffs. Gordon looked like a perfect fit with the Denver starting lineup, adding strong, versatile defense, aggressive offense, and a vertical threat for Jokic. The players around the stars, including Will Barton, Monte Morris, and Facundo Campazzo, played within their roles as auxiliary players. Michael Porter Jr. was figuring some things out on defense while shooting lights-out.

That was a time during which the Los Angeles Lakers were without both LeBron James and Anthony Davis due to injuries that ultimately ended their championship defense. The Clippers, Suns, and Utah Jazz made up the elite of the Western Conference, but none of them carried anything close to a Warriors-like inevitability. In fact, they each had their own distinct smells of fraudulence. The Nuggets looked like they might beat anyone.

For a moment, this might have been the year that the Nuggets finally broke through. It’s a franchise that has never been to The Finals and has barely had eras in which it was able to contend. Unlike its Rocky Mountain rival Utah, the Nuggets don’t have a place in NBA history as any kind of juggernaut. They exist in the realm of the Clippers, Minnesota Timberwolves, and Sacramento Kings — afterthoughts, with only brief bouts of contention and stardom.

A random second-round pick who turned into a legitimate franchise player has given them a direct route to relevance. Jokic turned into a player who could anchor a great team, proving it in the Nuggets’ bubble run to the conference finals and surprise elimination of the star-studded Clippers. Murray, the seventh overall pick in 2016, played like an All-NBA player in the bubble, erupting constantly.

The Nuggets had the star duo that could win them the West. Murray is the kind of player that any real championship contender needs in today’s game — the star who can beat any defense, get buckets from anywhere, and take clutch shots. Getting that player is immensely difficult. The lack of such a player has ended many a team’s playoff hopes.

The chemistry between Murray and Jokic meant that Denver never looked lost on offense. They always could go to Jokic in the post and let him play his two-man game with Murray, a maestro at hitting contested shots. Jokic kept the offense flowing with some of the best passing the league has ever seen, and Murray’s vision showed as he ran high volumes of pick-and-rolls and racked up assists in the playoffs.

The supporting cast was good enough. Porter, who was attacked constantly on defense in the bubble, tried harder and generally seemed to grow on that end. His shooting gave the Nuggets another deadly weapon against playoff defenses. Gordon was the perfect cutter for Jokic — an uber-athletic veteran who could elevate for dunks and use his size to punish smaller defenders.

After the Nuggets lost Game 4 of the Western Conference semifinals to the Suns, coach Mike Malone brought up the April 1 win over the Clippers. That game, he said, was a sign that his team could win it all. But it was just 11 days later that Murray tore his ACL, and all realistic hopes of a Nuggets championship run went out the window.

Jokic’s tour de force continued, and the Nuggets finished with the No. 3 seed in the league’s superior conference. Despite starter Will Barton missing significant time with a hamstring injury, Denver eliminated the volcanic Damian Lillard and his Portland Trail Blazers in the first round. Through it all, there was a universal sigh that the Nuggets didn’t have enough to really do it anymore.

The win over Portland led to the series against the Suns. This second-round series was never close. Chris Paul and Devin Booker were magnificent, and the Nuggets did not have counters. They were broken down. Jokic was forced to carry an immense load.

The role players all had to step into uncomfortable roles without Murray’s shot creation. Gordon, a subpar shooter, struggled mightily to score, and in the last three games against Phoenix, it seemed that the only way he could get a bucket was on a dish from Jokic. Porter was exposed again on defense, to the point that the Suns were taking turns putting him into screens and attacking him. Lingering back issues limited his shooting and led to bricky nights.

With PJ Dozier — a competent ball-handler and defensive weapon — sidelined for the playoffs, the Nuggets ran into depth problems around Jokic. Barton returned on a minutes restriction against the Suns, and put out a gutsy effort, but it’s difficult to expect Monte Morris, Facundo Campazzo, and Austin Rivers to replicate anything like Murray’s abilities.

The Suns put DeAndre Ayton on Jokic and stayed home on shooters, limiting Jokic to a scoring role. That didn’t prevent Jokic from gathering a 30-20-10 triple double in Game 3, but it did limit his ability to feed his teammates and dominate the game with his passing the way he did against the Clippers last year. The subpar shooting of Gordon and Campazzo complicated things further for Jokic, who could only do so much.

The Nuggets had an unmistakable Murray-sized hole in their offense. This Nuggets season will go down a massive disappointment, and an incredibly unlucky one. As this franchise knows very well, it is not easy to even be considered Finals contenders, much less actually make The Finals. Missing a chance to pull it off will hurt.

Murray is 24 and Jokic is 26. While Murray’s injury will stretch into next year, and it may be difficult to always expect a clean bill of health for Jokic, the Nuggets are still set long-term. It will be their mission to avenge a season that came so close to fulfilling everything that they’ve been waiting for.