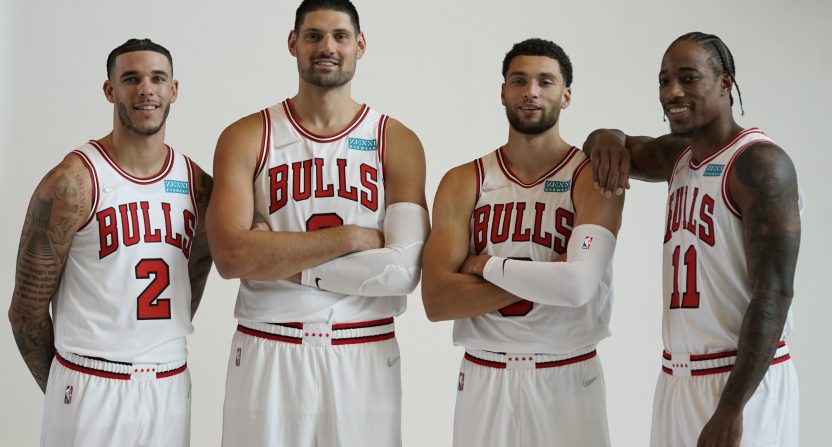 It was always going to take time for this new-look Chicago Bulls big three to gel. We’ve seen how other teams debuting new stars have had to grow into their roles and systems, including this year’s wacky Lakers.

And there’s plenty of room to grow for these high-minded, All-Star-packed Bulls. But the indications through five games are mostly positive — a 4-1 record with wins against the types of lesser teams they have to beat regularly to avoid the play-in. The big three of Zach LaVine, Demar DeRozan, and Nikola Vucevic has shown that it’s capable of playing well all at the same time. The defense, clearly the biggest concern entering the season, ranks a surprising fourth.

The obstacles, though, have shown themselves early on. The offense has not blown opponents out of the water, and some underlying issues could prove troublesome as they face more good teams. It’s hard to expect the defense to remain top-10 in the league, much less top-five, given the personnel. The depth relies on mostly unproven young players.

On Friday, they took their biggest hit yet: starting power forward Patrick Williams will be out for the rest of the regular season with a wrist injury. Williams, a second-year player with potential, was set up to be a crucial glue guy; a strong body on defense who can space the floor and hit some jumpers. The loss of Williams will shoehorn players like Javonte Green and rookie second-rounder Ayo Dosunmu into bigger roles.

The loss of Williams makes it even clearer how reliant the Bulls are on their stars. LaVine, DeRozan, and Vucevic are all great scorers with deep bags. They mesh well, and they have a combo guard in Lonzo Ball who’s a smart passer, roving shooter, and borderline elite perimeter defender. It’s up to that core to put up pretty much all of the Bulls’ points.

To make that task easier, they have to find a way to make sure the offense generates easy shots and good looks. It has sometimes looked a bit stagnant and individualized, with the ideas drying up early in some possessions.

The Bulls are a pure bucket-getting team, for better or worse. Only the Hawks take more pull-up two-pointers than the Bulls. While Chicago’s offense has been fine overall, ranking 12th, here’s a particularly troubling stat: 67 percent of their shots are two-pointers, the most in the league, but only 48.3 percent have gone in, the fourth-lowest percentage in the NBA.

Shooting a lot of midrangers will do that to your percentage. The Bulls are battling math and hoping that their three stars — all of whom are prolific midrange scorers — are good enough to offset the numbers.

They’ll have to shoot better in the restricted area, where they are tied for last in the NBA in field goal percentage. It’s a small sample size and will probably correct over time. But generating free-flowing offense with multiple layers will make those shots in the paint easier.

For this team, it’s a matter of building on what has worked. For example, the LaVine-Vucevic partnership has proven fruitful, and the chemistry has carried over from the second half of last season, after Vucevic was acquired from Orlando. LaVine has been growing as a passer, and looks particularly comfortable finding Vucevic on pick-and-pops. Watch how LaVine takes one extra dribble to give Vucevic a wide-open look:

This kind of timing and chemistry is deadly. The key is taking advantage of how defenses react to it. Both Vucevic and LaVine carry a ton of gravity on the floor as deadly shooters, which opens opportunities to swing the ball and disjoint the defense. Using that gravity to generate passing sequences is a good way to avoid that stagnancy.

They could use more offensive creation from Ball. He’s a smart passer, but he’s limited as a ball-handler in the half-court without any sort of penetration ability. Most of his shots come from beyond the arc, and he rarely gets to the free-throw line. A more aggressive Lonzo — something New Orleans always needed but never got — would add some extra juice, generating drive-and-kick sequences and making it easier for the stars to get good shots.

Ball is an important part of the Bulls running in transition, something they’ve surprisingly done only rarely this season. They’re inexplicably 26th in pace despite Ball’s outlet passing and LaVine’s explosiveness. Transition and semi-transition should be where they thrive:

Vucevic and DeRozan aren’t the speediest players out there, but Vucevic is deadly running into top-of-the-key threes as a trailer.

Using Ball as a screener is a nice wrinkle that we’ve seen a little bit from head coach Billy Donovan. It’s tough for defenses to deal with the movements of multiple willing snipers at once. They’ve used Alex Caruso as a screener too, leveraging Caruso’s canny passing:

These sorts of ball-movement plays will come more easily as the Bulls gain familiarity with each other. They’re a relatively young and fresh team. With the sort of shooting and spacing they have, there are a lot of directions they can go offensively. DeRozan in particular is an underrated passer (and has been popping more threes than usual so far).

The question now: what do they get from the depth pieces? It will be up to guys like Green, Dosunmu, Troy Brown Jr., Alize Johnson, and Derrick Jones Jr. to fill Williams’s minutes. That’s a lot to ask of mostly unproven pieces. Green might be the best of them. He’s a bouncy wing with a burgeoning perimeter game who has given them good minutes this season.

Caruso’s role will grow without Williams. There was already a possibility that Caruso would be a part of the closing lineup; now it’s pretty much a guarantee. He’s an elite guard defender who forms a brick wall alongside Ball, taking pressure off LaVine and DeRozan on that end. Caruso has also proven that he can hit some wide-open looks and create off the dribble. His smarts helped win the Lakers a championship.

The Bulls have the pieces to be a solid playoff team in the Eastern Conference. They’ll surely hit the buyout market and explore trades for an extra piece or two as they become available, and Coby White will return from injury to add some offensive spark off the bench (or be used as trade bait). They’ll remain one of the NBA’s most interesting teams.