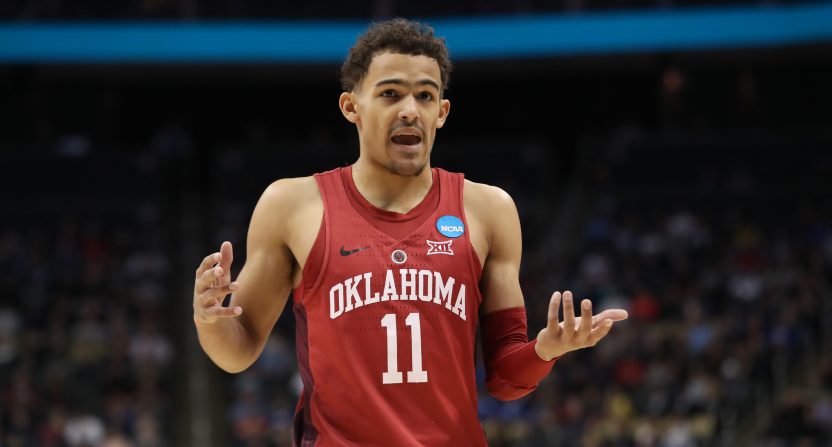 The 2018 NBA Draft is Thursday night. We don’t know who will be the best player (2017-18 rookie sensation Donovan Mitchell was picked No.13 last year, for example). But here’s a look at this year’s most intriguing draft prospects:

Perhaps no one in the draft has more boom or bust potential than Oklahoma point guard Trae Young. Maybe he’s the next Steph Curry. Maybe he’s the poor man’s Mo Williams. Young was one of college basketball’s most electrifying players with his fearless shooting and sensational passes. He single-handily carried the Sooners to the NCAA tournament. Young led the country in points per game (27.4), assists per game (8.7), and offensive box plus/minus (11.2). Normally, those stats for a major-conference program would have most general managers drooling. In today’s three-point-happy NBA, teams are loading up on shooters. And what makes the Golden State Warriors special – even before they acquired Kevin Durant – is Curry’s ability to stretch the defenses with his range.

Could Young be the next evolution of that shooting ability? That’s a tough ask. Young is short- measured at 6 ½ inches without shoes with a 6-3 wingspan. He also weighs 178 pounds. Those numbers suggest that he’ll probably be a liability on defense. However, if Young can shoot and pass at a high enough level, that won’t matter.

He’s bouncy. Donte DiVincenzo introduced himself to America in the NCAA tournament. His dunks and dominant national championship game performance made a lot of casual sports fans wonder: “Who is this guy?” Not bad for a dude who came off the bench.

DiVincenzo solidified his status as a likely first-round pick with an exceptional showing at the NBA combine. He had a combine-best standing vertical leap (34.5 inches and tied for first in the max vertical leap at 42 inches).  DiVincenzo is a two-guard so at 6-foot-6, he’s a little short. But assuming his athleticism translates, his height might not be an issue.

DiVincenzo might not ever be a star, but he could be a valuable role player. He plays like a high-energy guy with his leaping ability, ability to get blocks and finish at the rim. He’s more of streak-shooter and ball-handling isn’t necessarily a strength. He might be able to get a team a few more possessions with his hustle and be an important asset.

Mitchell Robinson is this draft’s Mystery Man. The seven-footer hasn’t played competitive basketball since his senior year of high school. Robinson was a McDonald’s All-American who signed with Western Kentucky University but never played in college. He left the school last summer, opting to spend a year preparing for the draft. His indecisiveness (he left WKU twice, including without informing the school the first time) coupled with his raw ability led many to believe that he made a mistake by skipping school. However, if Robinson is drafted in the first round, none of that will matter.

The scouting report on Robinson: he’s a shot-blocker who can run and finish with authority. That’s the kind of player every team could use.  He could be the next Clint Capela- an unpolished talent who could blossom into a defensive force and offensive finisher. He’s also drawn some comparisons to Javale McGee. The biggest question mark with Robinson: is his brief stint at Western Kentucky indicative of a maturity problem? Or is he a budding superstar who just needs guidance?

Michael Porter Jr. might be the most gifted offensive player in the draft. He’s 6-10 and could emerge as Kevin Durant-like unstoppable scorer. If he’s anything close to that, he’ll be the best player in this draft.

But… Porter’s recent injury might scare off some teams. Back injuries have destroyed athlete’s careers, especially in basketball where quick, explosive moves can be the difference between a marginal player and an elite one. When Porter returned from back surgery, he looked like a guy who hadn’t played in a while, shooting 30 percent in three games. It’s impossible and unfair to judge him on an injury that usually takes two years to recover from. There were also questions about a hip injury.

It might be best to take a cautious approach to Porter. Minimize expectations while limiting his minutes and games. Maybe even go the extreme route of a redshirt season. There is also the danger that Porter might require further surgery down the road. Porter will need to go to a team with a top-notch medical and rehab squad. His ceiling is so high that it’s probably worth it for a team like the Bulls or the Cavaliers to roll the dice. You might be getting a future NBA All-Star at a discounted price.

Bamba is a Sequoia. He set an NBA combine record with a 7-foot-10 wingspan. He had the longest reach (9 feet, 7 1/2 inches).  The 7-foot-1 Bamba is also unbelievably fast for his height. He reportedly ran a three-quarter-court sprint drill for the Chicago Bulls in a freakish 3.04 seconds. Holy crap. Those numbers suggest that Bamba will not only be an excellent rim protector, but has the potential to be a NBA game-changer when it comes to guarding the perimeter as well. Bamba might be long enough and quick enough to bother previously unguardable offensive players like LeBron James and Kevin Durant.

Offensively, he’s a work in process. He did make 13 three-pointers at Texas which suggests that his face-up game might get better. But he only had 15 assists to 46 turnovers in 30 games, which is troubling. Bamba, who needs to put on weight and strength, might never been an efficient offensive player but his defense and athleticism could keep him in the NBA for a long time.