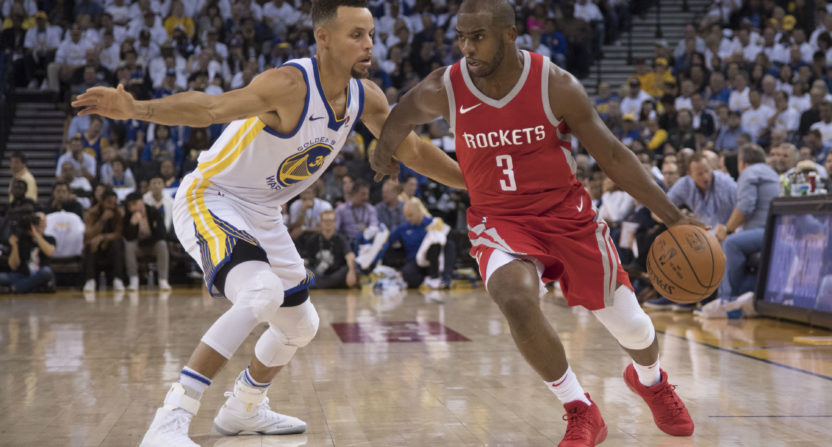 Any reasonable NBA follower has know for months that — barring serious injuries to star players — the Golden State Warriors and Houston Rockets would meet in the 2018 Western Conference Finals.

And that’s officially going to happen, with the Warriors (113-104 Game 5 win over Pelicans) and Rockets (112-102 Game 5 win over Jazz) winning their second-round series on Tuesday night.

It’s fun to follow the NBA regular season and watch the best basketball players in the world do amazing things, and the first two rounds of the playoffs have certainly had some thrilling moments. But for all intents and purposes, the last several months haven’t been much more than glorified exhibition games.

The reality is that — again, barring serious injuries to star players — the Warriors and Rockets are the only realistic title contenders.

The Boston Celtics probably would’ve been had they not lost Gordon Hayward and Kyrie Irving to season-ending injuries. And they have an amazing coach in Brad Stevens and still have a very real shot to make the Finals; they currently have a 3-1 lead over the Philadelphia 76ers in the second round. But in a seven-game series, it’s just hard to see them having the firepower to be able to give the Warriors or Rockets much of a series.

If the Sixers were to come back and win that series, they certainly have dangerous star talent, led by Joel Embiid and Ben Simmons. But their youth is showing in the series and it feels like they’re at least a year away from taking the next step.

Really, the Cleveland Cavaliers are the one team on the Eastern Conference side of things that we shouldn’t completely write off, simply because they have LeBron James. Very few people gave the Cavs a chance in 2016, when they played the record-breaking 73-9 Warriors, and then LeBron dominated to lead the Cavs to a stunning championship.

This current Cavs team is very flawed, and you could argue they were outplayed in their seven-game, first-round series against the Indiana Pacers. But they’re winners of five straight after a sweep over the Toronto Raptors, and are playing better basketball at the right time  (though Toronto’s embarrassing effort perhaps made the Cavs look better than they actually were). And again, they have LeBron, the best basketball player in the world. He’s shown us time and time again that he can take over a series, even if the opponent has the better overall roster. However, beating the Warriors or Rockets in a seven-game series would likely take his best performance yet, along with his supporting cast playing to the best of their abilities. It could happen, but it’s absolutely a longshot.

The Warriors will be viewed as the favorites, and deservedly so: they’re the defending champs, have won two titles in the last three years, and have reached the Finals three straight times. They have Steph Curry, Kevin Durant, Klay Thompson, and Draymond Green. They have a great head coach in Steve Kerr. Golden State has a playoff record of 24-3 over the last two years. They tied an NBA record on Tuesday night for consecutive home playoff wins, with 15.

But this Rockets team is arguably the best team the Warriors the have faced over the last four years in the playoffs. The numbers back that up, with the Rockets winning more games (65), having a better point differential (8.5), and having a higher offensive efficiency rating (115.5) than any Golden State opponent from 2015-2018.

Like the Warriors, the Rockets are loaded with star talent, led by their backcourt with Chris Paul and James Harden. Big man Clint Capela is a double-double machine (13.9 points, 10.8 rebounds per game in regular season) and tremendous rim protector (NBA-best 2.80 blocks per game in postseason) whose 24.55 Player Efficiency Rating ranked 13th in the NBA. Veterans Eric Gordon, Gerald Green, and Trevor Ariza all averaged double-digit scoring this season, and all shot 36%+ from three-point range.

It’s so difficult to match the Warriors’ firepower, but Mike D’Antoni’s Rockets squad seems capable of doing so, and it certainly helps that they have home-court advantage.

The Rockets-Warriors showdown is sure to be entertaining, and gets started on Monday night (9 PM ET) in Houston.