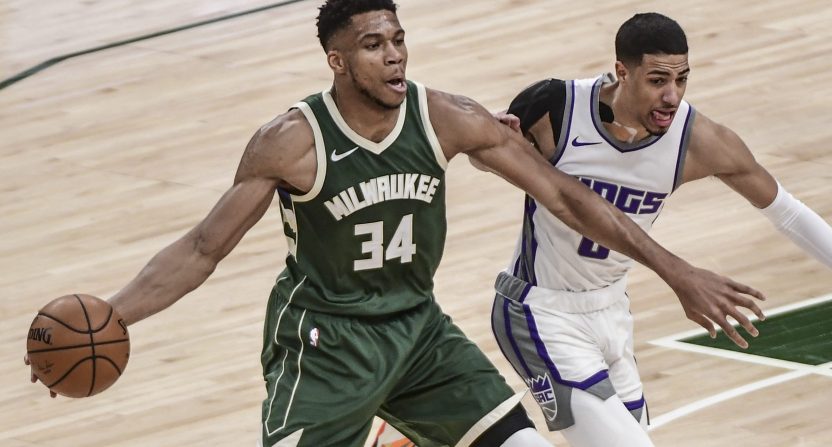 Giannis Antetokounmpo and the Milwaukee Bucks are playing for the postseason. After two years of Giannis winning the MVP followed by postseason disappointment, Milwaukee has somehow flown under the radar this year, overshadowed by the league’s latest Super Team in the Brooklyn Nets. With Giannis on a super-max, the Bucks are settled into years of championship contention. The clock starts now.

Milwaukee isn’t having a dominant, historic regular season, like they did last year. They’re 18-13, putting them a more ordinary third in the inferior Eastern Conference (though they do have the second-best net rating in the league). Antetokounmpo looks like an All-NBA first team-level player as usual, but he seems to have been put on the backburner of the MVP conversation, with LeBron James, Nikola Jokic, and Joel Embiid dominating that race.

With Jrue Holiday out, they’ve gone through some struggles in recent games, losing five straight before turning it around with wins against bad teams. Their uneven guard depth (heavy DJ Augustin and Bryn Forbes minutes) has been exposed without Holiday healthy. But struggles in the regular season shouldn’t concern this team too much. For the most part, they have the right team and the right players. It’s about getting it done in the postseason.

That starts with Giannis. How he improves as a first-option in tight, well-defended playoff games and how coach Mike Budenholzer uses him will go a long way toward determining the Bucks’ playoff success. In the bubble, the Heat used their multitude of strong defenders to take away Giannis’s rampages to the rim, trying to force the Bucks to diversify their offense. They never did, and that meant they lost. By the time Miami went up 3-0 in the series, the Bucks were getting killed with Giannis on the court (and actually winning the minutes without him).

The Ringer’s Zach Kram wrote in January that Giannis needed a Kobe to his Shaq. As hard as it may be to accept, the Bucks have to think of Giannis as a versatile big man, not necessarily as a clutch-time initiator and playoff point forward. Obviously, you can win championships with a versatile big man as your best player. But non-shooting big men who are clumsy playmakers need someone to get the ball to them a lot of the time. That’s where Khris Middleton comes in.

Middleton is having another All-Star season, averaging 20 points on (very close to) 50-40-90 shooting. A lot of the Bucks’ offense in important games and moments will come from Middleton, their best perimeter offensive player. Giannis can be involved as a screener, cutter, and finisher.

But there are two problems here: 1) Middleton, in case you haven’t noticed, isn’t Kobe Bryant as a scorer and playmaker, though he’s a vastly more efficient shooter; and 2) Giannis can’t score via post-ups or non-layups. A top-10 basketball player ever isn’t walking through that door to help, so that second point is the biggest immediate problem.

Per the NBA’s tracking stats, Giannis’s post-up frequency (about 12 percent) is consistent with his last two seasons, and his efficiency (0.93 points-per-possession) is average as usual. His post-up frequency usually tanks in the playoffs. He often settles for three-pointers, which clank off the rim most of the time. He averages 3.4 wide-open threes per game (defenders six-plus feet away) and makes a ghastly 27 percent of those.

He doesn’t have to shoot jump shots at even a league average level to be successful in the playoffs. His athleticism and finishing ability at the rim is almost unmatched in the NBA, and he’s a terror in transition. But Budenholzer has to find a way to take advantage of Giannis’s finishing gifts. Like last season, Giannis is rarely used as a roll man in the pick-and-roll — fewer than twice per game, a frequency of just six percent. The Bucks offense can get bogged down in straight pick-and-roll sets, rarely using Giannis as something other than an initiator.

It’s also up to Giannis to diversify his game. One thing that the NBA’s best big men have is a wide repertoire of scoring methods in the paint. Embiid, Jokic, and Anthony Davis are able to hit floater-type shots with regularity, using their size and strength to back down defenders. They can calmly slot the ball in the basket after some dribbles, an important source of offense in tight games.

Here’s Davis doing that in the 2020 playoffs:

He doesn’t have that sort of touch around the rim, something that may be related to his shooting woes. But watch the buckets that Shaquille O’Neal used to score. He wasn’t just dunking and getting finger rolls. He made those little big man floaters and hook shots that stemmed from strong post moves. These are shots that Giannis has to add. He won’t be Shaq in terms of pure post dominance, but he can generate playoff offense by going to them. He also could make himself useful in the clutch with these types of shots. (Not these, if he can help it.)

The importance of post-ups brings us to the other end of the superhuman point forward spectrum: LeBron James, who as Sports Illustrated’s Michael Pina recently noted, went to the gym with Hakeem Olajuwon to revamp his post game after the 2011 Finals. LeBron is a great ball-handler, and arguably the smartest basketball player ever, so he has always had a much easier time creating offense when defenses loaded up the paint.

But the development of LeBron’s post-up game is instructive for Giannis. LeBron uses his post game to create functional offense for the entire team. He backs down his matchup, baiting defenses into double teams and locating the skip passes that arise as a result. Sometimes, he bullies his way to the rim, and other times, and he creates an open three.

No one is expecting Giannis to pick apart defenses like LeBron, but Giannis looks uncomfortable trying to make plays out of the post. Sometimes he looks uncomfortable as a playmaker in general. Here, he doesn’t anticipate the double-team and throws up a bad shot:

When Jae Crowder shades off of Bobby Portis under the rim, Giannis panics and flails up a shot that misses. There were 13 seconds left on the shot clock, plenty of time to back DeAndre Ayton in further. Once he turned to his left, he also could have found a wide open DJ Augustin in the corner for three. (Augustin, for his part, should stay in Giannis’s sight in the corner.)

This wider discomfort with playmaking can result in possessions that rely completely on Giannis’s full-speed drives to the rim. These work plenty of times in the regular season, which is why he averages 28 points. But he has to make better reads on these types of plays in the playoffs, when defenses will put more barricades in front of him:

He’s averaging 5.7 assists and has continued to generate plenty of good shots. The passing could still improve, though, and that goes hand-in-hand with tighter ball-handling, which will help him use his size to slow things down in the paint and create an advantage.

Nitpicking a bona fide superstar’s game like this can feel unnecessary. It’s not like Giannis isn’t playing well. But we’ve seen what happened in the playoffs the last two seasons, and if the Bucks are going to win it all with Giannis as the best player, these are the improvements he has to make. Budenholzer also has to use his superstar better, putting him in better positions that maximize his strengths.

Milwaukee will have to deal with the Brooklyn offensive supernova, Embiid and the first-place Sixers, and the still-pesky Heat and Raptors, two teams with plenty of history playing the Bucks in important games. It won’t come easy.