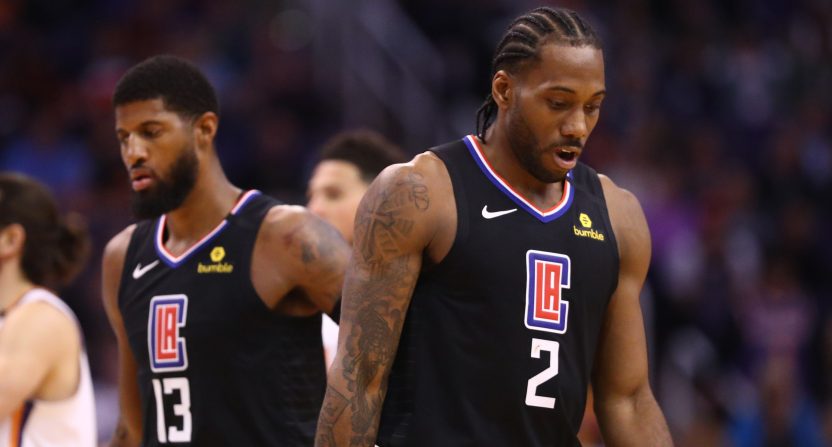 Much of the focus during the NBA offseason has been on the activities of the Los Angeles Lakers. The defending champs took big steps forward and secured their status as consensus favorites, so the attention is justified. The Lakers added NBA Sixth Man of the Year Montrezl Harrell, Dennis Schroder, Marc Gasol, and Wesley Matthews, players who fit more seamlessly (for the most part) around LeBron James and Anthony Davis.

The Los Angeles Clippers have flown a bit more under the radar, at least as much as a big market team with two bona fide superstars can. Fresh off a humiliating collapse in the Western Conference semifinals, the Clippers saw Harrell and JaMychal Green depart in free agency, and didn’t make many high-profile moves to boost their supporting cast around Kawhi Leonard and Paul George. In the rush to anoint the Lakers clear favorites to repeat, though, it seems that many have forgotten how much of a threat this Clippers team represents.

There’s reason to believe that the Clippers are not far off the Lakers as contenders. In fact, there should be little doubt that the Clippers improved this offseason. They replaced coach Doc Rivers with Tyronn Lue. They brought in Serge Ibaka, a solid rim protector and three-point shooter who will do everything that Harrell couldn’t. Perhaps most importantly, they will run it back with a team that publicly lacked chemistry last season.

Their locker room problems may not go away, even with Lue replacing Rivers, but at the very least they will have more on-court familiarity with one another. Leonard and George, who have only played 37 regular season games together, should find more of a middle ground between Leonard isolations and George spot-up threes. Their best lineup, with Marcus Morris, Patrick Beverley, and either Ibaka or Ivica Zubac surrounding the two stars, rivals any in the league.

Two on-court issues doomed them against the Denver Nuggets in the bubble: the defense of Harrell against Nikola Jokic, and the unwillingness of Rivers to remove Harrell; and the lack of fluidity on offense, perhaps brought on by the lack of a steady ball-handler. They solved the first problem by letting an apparently disgruntled Harrell walk to the other Staples Center locker room. The second problem could still rear its head, depending in part on Lue’s ability to assemble the offense more effectively than Rivers.

The addition of Luke Kennard essentially replaces the shooting of Landry Shamet (who was traded to the Nets) and adds ball-handling. Kennard shot nearly 40 percent from three last season, and is a capable pick-and-roll ball-handler, with a midrange arsenal and crafty dribbling in tight spaces. He’s adept at keeping defenders on his shoulder and making plays.

It remains to be seen what will happen with Lou Williams. It would make sense to explore a trade, in part to shake up a team that was undone by its chemistry issues. In a potential matchup with the Lakers, LeBron might force Williams off the floor by attacking him on switches. If Williams stays, he’s more likely to remain a gunner off the bench who adds offense when Leonard and George sit.

The point guard concern will look overblown if Lue finds a way to mesh his stars. George complained recently that Rivers used him “as a Ray Allen or a JJ Redick.” While George was a deadly flamethrower from deep in the regular season, he infamously got cold in the playoffs, bricking everything as the Nuggets came back from 3-1 down. Running more sets in which George handles the ball would help diversify the offense and give them options for when they stagnate. The Clippers probably can’t afford to take George’s playoff struggles into account — they have to trust their stars and see how far they can take them.

Leonard mostly performed well in the postseason, outside of his own personal collapse in Game 7 against Denver. As I wrote during the Mavericks series, he’s making strides as a passer. The Clippers could use his help controlling the offense and making sure every player is getting involved. He passes well when he disjoints the defense, but what about initiating the half-court offense in the playoffs? He’s not going to be LeBron as a playmaker, but without a true point guard in closing lineups, they’ve proven incapable of talent-ing their way to consistent offense.

Kennard will help in this respect. As a scary shooter and willing creator off the dribble, he’ll keep the offense fluid when he receives a kick-out pass. They will likely play a good amount of minutes with five capable shooters, when Ibaka plays the five. Offense will come even if there’s not a point guard initiating it.

Defense will never be a problem for this team. We said that last year, which was proven wrong when Jokic toasted Harrell, but this team is stacked on the defensive end. Their achilles heel is Williams and possibly Kennard, who’s also a below-average defender. LeBron will mercilessly torture them, as he did to Tyler Herro, Michael Porter Jr., and, in the past, Stephen Curry. With so many strong wing defenders, the Clippers have ways to overcome that.

It will always be difficult to predict a team’s chemistry and ability to play together. While it’s possible that the Clippers will grow as a team, it’s also possible that the problems reported last year will carry over.

But part of why they lost last year is variance and coaching decisions. They missed a lot of open three-pointers against the Nuggets. As much as everyone would like to drag George for playoff failures, there’s a good amount of luck in that. Rivers and Harrell are gone. They might not face a player who goes off the way Jamal Murray did again.

The desperation is real for the Clippers, with Leonard and George hitting free agency in 2021. They need to win right now, regardless of George’s recent comments that he’d like to be a Clipper for life (things change fast; just ask Kyrie). Along with the Bucks, the Clippers are as desperate to win right now as any team in NBA history.

While the Lakers are the favorites, and enter the season as the best team, the Clippers won’t go away. They have all the tools to come away with a championship. It’s up to them to put it together.