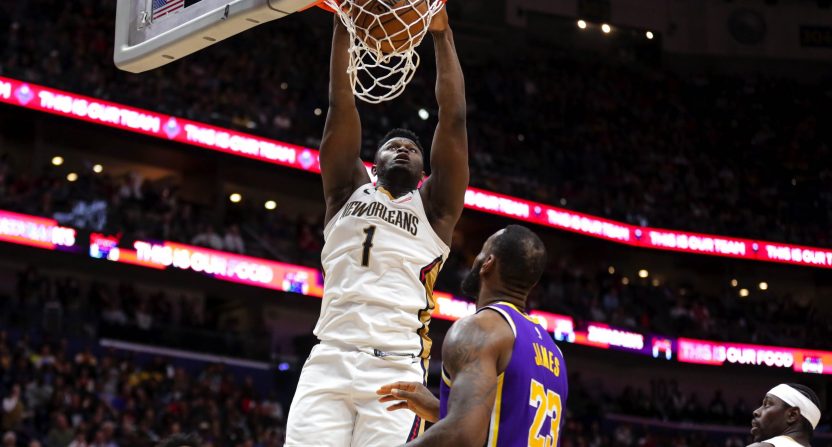 When last we left the New Orleans Pelicans, they were on the verge of something special. Once 6-22, suddenly in playoff contention. Thanks largely to a healthy Zion Williamson, New Orleans won eight of its final 13 games. Then COVID-19 shut everything down.

Now with the NBA tentatively set to restart on July 31, that’s great news for the Pelicans. With their developing core, they stand to gain a lot. New Orleans needs its young talent to play as many meaningful games as possible.

This resumption will feature eight regular-season games before the start of the postseason. There’s also the added potential drama of a play-in tournament pitting the No. 8 seed vs. No. 9 seed to determine the final playoff team.

Fun! There is a caveat, however, for those of you who want to see Zion in the postseason.

New Orleans (28-36) is 3.5 games out of the No. 8 spot in the Western Conference, trailing current No. 8 seed Memphis (32-33). That means the Pelicans will be essentially already in playoff mode as they try to fight their way in.

This unusual format puts the Pelicans at a disadvantage. The COVID-19 stoppage struck mid-season so teams will finish the regular season with different numbers of games played.

Portland has played two more games than New Orleans and Sacramento. If Portland, New Orleans, and Sacramento all go 6-2 during the 8-game resumption of the regular-season, the Trail Blazers would face Memphis in that play-in tournament because they would have a slightly higher winning percentage.

Is that fair? Probably not. But it is exciting.

We’ll get to see how youngsters Williamson, Brandon Ingram, and Lonzo Ball handle pressure. Williamson, last year’s No. 1 overall pick and a Rookie of the Year candidate, turns 20 years old next month. Ingram and Ball are both only 22.

Williamson might not be able to chase down Memphis guard Ja Morant in the race for Rookie of the Year. But he could overtake Morant and the Grizzles for that final playoff spot. And who wouldn’t love to see a first-round playoff matchup between LeBron James’ Lakers and Zion’s Pelicans. That’s the kind of playoff competition that will serve Zion well.

This isn’t the ideal experience: no fans and a neutral court. But it’s far better than the bleak alternative of no playoff games. There’s a distinct and tangible difference between NBA regular-season games and NBA playoff games.

The 82-game regular-season schedule is a grind. Teams don’t have much time to practice. In the playoffs, however, not only is the intensity ratcheted up, but teams have time to game-plan against opponents. The defenses Zion has faced so far are nothing compared to playoff-caliber defenses. A team like the Lakers could throw multiple schemes as well as multiple bodies at Williamson.

It will be up to Williamson to figure out how to respond effectively. He won’t be able to simply overpower and out-athlete better teams with his unprecedented 6-foot-6, 285-pound frame. This is all part of the NBA growth curve: learning how to win in the playoffs. Even the greatest players in history have struggled in that department. Michael Jordan didn’t win a playoff series until his fourth season.

New Orleans hopes it won’t take as long. Williamson has a far better supporting cast than Jordan did in his early years. The two players the Pelicans got from the Lakers in the Anthony Davis deal (Ingram and Ball) have been major contributors.

Ingram, the second overall pick of the 2016 draft, has increased his scoring every year. This season, he blossomed into an All-Star, averaging 24.3 points while setting careers bests for PER (19.2), box plus/minus (2.4), and value over replacement player (2.1). He’s no longer a liability at the free-throw line (85.8 percent with New Orleans after being a career 66.2 shooter with L.A.) And he improved from three-point range (38.7 percent as compared to 32.9 with the Lakers).

Ingram seems like he will be an ideal No.2 option to Williamson and might be setting himself up for a max money deal when he becomes a restricted free agent after the season. What about Ball? He’s another player who has enjoyed his best season.

Ball and Williamson are one of the NBA’s most exciting alley-oop dunk combinations. Ball is an exceptional passer and Williamson a terrific finisher. It’s important to have someone to get Williamson the ball in the rhythm.

Can the trio of Williamson, Ingram, and Ball get the Pelicans to the playoffs? It will be fun to find out.