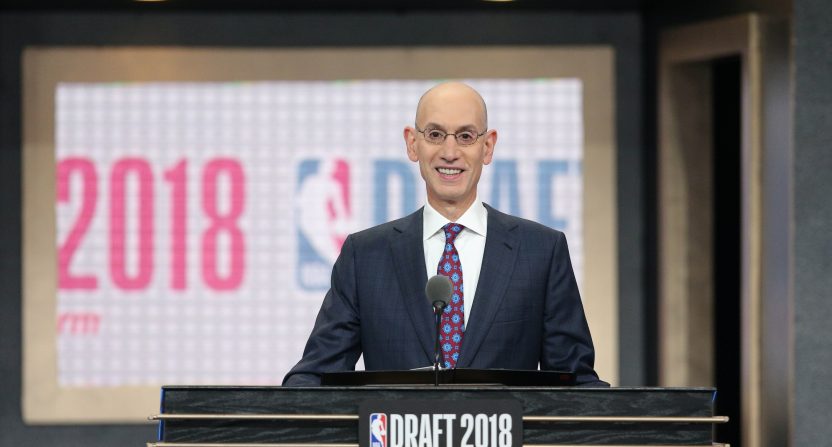 On Tuesday, the NBA announced an exclusive deal with MGM, making the gaming company the official betting sponsor of the league. The deal, reported as a three-year, $25 million pact (which is peanuts in comparison to some of the ridiculous deals sports leagues are getting for sponsorship purposes), gives MGM “rights to use league highlights, names, logos, and its direct data feed”.

There has been no note as to whether or not the NBA will receive the “integrity fee” they were seeking, which would have given the league a small cut of the wagers made on the league’s games and events. Earlier this year, the league indicated that they would be in favor of legalized sports betting as long as they got their cut. NBA Commissioner Adam Silver also said that the only “exclusive” part of the deal is the designation of MGM as the league’s official betting sponsor, and that similar deals for the highlights, names, logos, and data could be inked with other gaming companies.

The NBA is the first American sports league to agree to a deal that allows a casino to use team names and logos at casinos. In addition, the names and logos will be used in an upcoming MGM sports betting app, which will only be available in states (like Nevada) that allow online sports betting. On Monday, MGM announced a $100 million joint venture with GVC Holdings to “create an online gaming experience,” and also entered into a partnership with Boyd Gaming to offer mobile and online gaming in states where its legal.

This agreement between the NBA and MGM is just the next step towards the acceptance of sports betting in America. It’s huge for the league to plant their flag with MGM, because it shows where they stand. There’s no confusion about how the league feels about sports gambling now – if they weren’t in favor of it, they wouldn’t have agreed to a deal with a behemoth like MGM. If they weren’t optimistic about sports gambling’s future in this country, they wouldn’t have set themselves up for future success in the field. If they didn’t think more positive changes were coming, they wouldn’t have been the first American league to take this massive step.

The door is also open for a more advanced partnership in the future – this agreement does *not* include live streaming in the planned betting app.

NBA’s three-year deal does not include rights to allow MGM to stream live NBA games on a mobile app that allows gamblers to bet on that app at the same time. That, many believe, is where the big money is.

It’s going to be interesting to see how this develops over the next three years, and if other leagues start following suit. If so, it will be tough for lawmakers to ignore the rising tide.