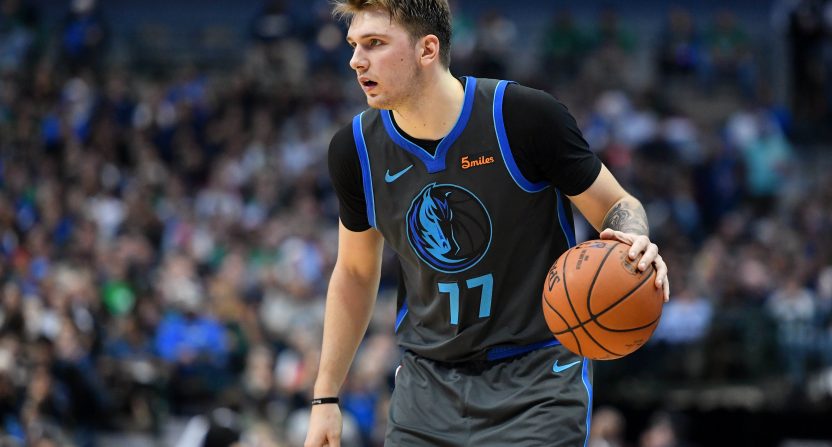 The 2018-19 NBA season isn’t quite a month old yet, but there have been some interesting developments. Here are our top five questions so far…

Is this the beginning of the end for the NBA’s greatest team?

The Golden State Warriors have never lost this many games this quickly under head coach Steve Kerr. They have already dropped as many as they did during their historic 73-9 regular-season of 2015-16.

Obviously, they’re not the same team without Steph Curry. Before Curry’s groin injury, they were 10-1 with the lone defeat a 100-98 decision at Denver. Since then, they have looked vulnerable. What’s particularly alarming? They rank No. 15 out of 30 teams in defensive efficiency. Since Kerr took over in 2014-15, the Warriors have never been lower than No. 11.

Perhaps with Curry, Draymond Green (toe), and DeMarcus Cousins (Achilles) healthy, they will steamroll through the league. But even if that’s the case, the speculation about Kevin Durant’s future is weighing on this squad. And Durant’s tumultuous relationship with Green bears watching. Does Durant really feel like there’s a better option out there? He left Oklahoma City because he was tired of having to work so hard for shots in a stacked Western Conference. Bolting from Golden State will be returning to that same frustration. Unless, he’s looking to team up with …. LeBron?

How good are LeBron and the Lakers?

For LeBron James, this season isn’t about winning a championship. It’s about him assessing the Los Angeles Lakers’ roster to see if there’s an emerging star. Youngsters Brandon Ingram, Kyle Kuzma, and Lonzo Ball are all auditioning. Right now, none of these guys look special.

The Lakers have been inconsistent at best, but so has the rest of the Western Conference. With no one running away with the West, L.A. (14-9) has been able to withstand growing pains. They ‘re shockingly close to the top spot in the conference (Does anyone believe in the Denver Nuggets or the L.A. Clippers?). That’s a significant accomplishment considering the flawed roster.

LeBron needs to be surrounded by three-point shooters and the Lakers are 20th in three-point accuracy (34.5). LeBron has been his usual self. He’s great enough to drag this team to a run in the playoffs. But you can’t make a logical argument that he can reach the Finals with this bunch. L.A. could look to make a trade now, but is it willing to sacrifice cap space? Bradley Beal would certainly help. He’s a career 38.9 percent 3-point shooter, although he’s shooting a career worst 32.5 percent. Maybe it will happen in the offseason.

Will the Boston Celtics even make it to the Eastern Conference Finals?

Brad Stevens came into the season with more pressure to win than any other coach. He reached the conference finals last year without two of his most talented players. Now with Kyrie Irving and Gordon Hayward back, they were the odds-on Eastern favorites.

But these Celtics (13-10) have started slowly. Offensively, they have been a huge disappointment. In this golden era of scoring, they’re 20th in offensive rating. Irving (22.2 points per game, 48.1 percent shooting) has been virtually the same player, averaging close or better to his career averages. Hayward, however, looks like a guy coming off a knee injury. He’s averaging a career-low in points (11.2), and his player efficiency rating (15.8) is the worst it’s been since his second season (15.5).

Hayward has moved to the bench. Not something you normally see with a max contract player. But it might spark the Celtics bench, which has been mediocre at best. Boston needs to fix its offense because the East is competitive at the top. Toronto has been the best team in the NBA. Milwaukee has the league’s top offense and premiere young player in Giannis Antetokounmpo. Philadelphia added Jimmy Butler to its talented roster. And the Detroit and Indiana have been solid. If Boston doesn’t start playing better, it could miss out on a top-4 seed.

Are Toronto and Milwaukee legit?

These are not your older brother’s Toronto Raptors. Toronto is second in the NBA in scoring margin (+8.3) and has the best record (20-5). The Raptors have a new star in Kawhi Leonard, and a new coach in Nick Nurse. The biggest on-the-court offseason acquisition – for this season – might not be LeBron, but Leonard (25.6 ppg). After taking almost all of last season off due to a mysterious quad injury, he’s an MVP candidate. Kyle Lowry has also been sensational. He’s averaging an NBA-best 10.3 assists per game. His previous career high is 7.4.

As for Milwaukee, Giannis Antetokounmpo is the most terrifying player in basketball. There’s simply no way to keep him from getting his shot off.  Coach Mike Budenholzer is taking advantage of Antetokounmpo by speeding up the tempo. The Bucks ranks fifth in pace of play after being No.20 last year. As a result, Milwaukee easily leads the NBA in scoring (121.4) and scoring differential (10.1), while playing the NBA’s toughest schedule. Antetokounmpo, is enjoying a career year with a 29.34 PER, 62.3 true shooting percentage, and averaging 27.6 points per game.

Who is the top rookie?

Dallas Mavericks guard Luka Doncic is must-see TV. The 19-year-old displays veteran savvy. Doncic leads all rookies in scoring (18.6) and minutes (33.1), is second in assists (4.2) and steals (1.0), fourth in rebounding (6.6), and is shooting 38.6 percent from three-point range. Doncic, the third overall pick, came into the league with considerable hype. But he’s been even better early than most people thought.

We knew about his passing and ball-handling skills. What has been a surprise has been his effective post-up moves. His combination of offensive skills and inside-outside game has made him a consistent scorer. His 6-foot-7, 218-pound frame has allowed him to stand up to the league’s physical play. He’s a huge reason why the Mavericks have rallied from their 2-7 start to have a 12-10 record.