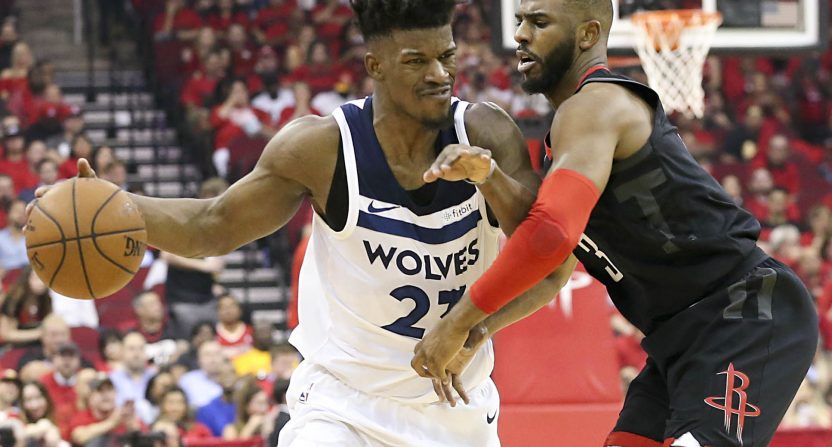 The bizarre absurdity of the Jimmy Butler saga in Minnesota carries important consequences in the NBA’s Western Conference. It could, depending how soon Butler is dealt from the Timberwolves, open a new playoff spot in the notoriously difficult conference. Minnesota would likely steal a lower seed if Butler and Karl-Anthony Towns stayed healthy for 70-plus games. If they drop, which they almost certainly will when Butler is eventually traded, there will be another open slot.

Those slivers are nearly impossible to crack open. The West features seven teams that, at the very least, border on elite. Beyond Golden State and Houston, the Jazz, Nuggets, Thunder, Trail Blazers and Lakers are almost sure to make the playoffs. The mid-tier of the conference, with or without a Butler-boosted Wolves, is insanely difficult.

Denver epitomized the conference last season. They won 46 games and still only finished ninth, losing a winner-take-all game on the last day of the regular season against Minnesota. A full season of what they were doing in the second half of last year, when they stormed back into the race, could elevate them past 50 wins.

Any step back from the Timberwolves could be offset by a rapidly improving Jazz team and, of course, the rise of the LeBron-led Lakers. No LeBron team is going to miss the playoffs.

The projected 3-7 slots, approximately, are going to be extremely tight, as are the following 8-12 slots. Like last year, everyone except the Rockets and Warriors will be stuck in a dogfight for every spot. Just now, I tried to rank West teams, spent a bunch of time looking at it, and decided I had a suitable list, and then realized I forgot the Pelicans and had to reconsider. It will be tight.

Here are some teams that could benefit from a potential Timberwolves fall, and the extent to which they could compete for that spot:

The Spurs, fresh off their biggest offseason of change since they drafted Tim Duncan, are going to launch more mid-range shots than any team in the league, and they’ll hope turning against every current basketball trend works out for them.

LaMarcus Aldridge and Demar DeRozan are still legitimate stars and Gregg Popovich is still the coach, so the Spurs have every chance to maintain their playoff streak. Aldridge leads the “Old and Slow” Spurs brigade. It will be fascinating to watch DeRozan after an offseason trade he clearly did not want.

Dejounte Murray’s torn ACL sucks. Losing Murray’s youthful pop and perimeter length on defense will hurt. There will be new blood in San Antonio — no more Tony Parker, Manu Ginobili or Danny Green. The relatively brief Kawhi Leonard era is over. The eighth seed would be a win, and stealing a game from the Rockets or Warriors in the first round would be more of a win.

It might take a superhuman effort from Anthony Davis to get the Pelicans where they want to go. There is reason to believe their success after DeMarcus Cousins’ injury was an aberration, or at least not an indicator of a sure playoff berth this season. The frontcourt of Davis and Nikola Mirotic is the key, as is the emergence of Elfrid Payton as a suitable replacement for Rajon Rondo.

Possibly the most intriguing part of this Pelicans team: Julius Randle, and whether he can sufficiently supplement Davis and Mirotic. Randle has been on and off in his career. New Orleans could be the place he blossoms.

The Blazers got trashed by the Pels in the playoffs, creating an existential basketball crisis for everyone in Portland. Are Damian Lillard and CJ McCollum good enough? Have the Blazers surrounded them with sufficient support? Is it time for The Big Rebuild?

It turns out finishing third doesn’t automatically make you a great team when you also finish only two games out of eighth. Portland are rolling with McCollum and Lillard again, hoping for further improvement from consequential center Jusuf Nurkic (who has lofty goals) and significant contributions from Evan Turner, Al-Farouq Aminu and Maurice Harkless. Maybe Seth Curry could have a role, even.

Portland are looking at anywhere from another third-place finish — two legit stars with chemistry can carry you pretty far — to missing the playoffs, if the supporting cast proves inadequate.

Denver’s range of possible outcomes is similar to Portland’s. The difference for the Nuggets is urgency; whereas the Blazers are under immense pressure to make it all work now or move in a different direction, Denver are in the earlier stages of Nikola Jokic’s stardom. Guards Jamal Murray and Gary Harris are 21 and 24. Rookie Michael Porter Jr. has a ton of talent and could be a valuable piece if injuries don’t hold him back.

Jokic is an offensive fulcrum and the best passing big man in the NBA. He emerged as a legitimate star last season. His defense, which remains below-average, is the lingering concern, though it could be aided by the return from injury of Paul Millsap, a veteran power forward who can actually defend.

Murray and Harris will be an intriguing backcourt, with small forward Will Barton filling out a solid starting five.

This is the depth of the Western Conference: Aside from the Suns and Kings, every team has a feasible path to contention, even if this bottom tier of LA, Dallas and Memphis is unlikely to sniff the postseason.

The Mavs are transitioning out of outright tanking, the Grizzlies have Mike Conley and Marc Gasol returning from long-term injuries, and the Clippers want to stick around the fringe as they bide their time until 2019 free agency.

LA are the likeliest of these three to push one of the mid-tier teams for the eighth-seed. Lou Williams is fresh off a Sixth Man of the Year trophy, and Tobias Harris has enough talent to steal some games. The development of 20-year-old Shai Gilgeous-Alexander could be the most compelling part of this Clips team. (As an interesting aside, Gilgeous-Alexander will debut the longest name-on-back in NBA history when he steps on the court for the first time.)

Luka Doncic is the one big reason to watch the Mavericks, whose backcourt of Doncic and Dennis Smith Jr. could propel them beyond last season’s tanktastic 24 wins. Memphis are the worst of the three, though the additions of Kyle Anderson and Garrett Temple in wing woles will help. The Grizzlies’ supposed return to hard-nosed basketball could be halted at some point if Conley or Gasol is traded.

Hopefulness in all of these places, no matter how likely their playoff aspirations are, is partially rooted in the looming collapse of the Timberwolves. The West is so tight that one team’s misfortune is opening significant doors.