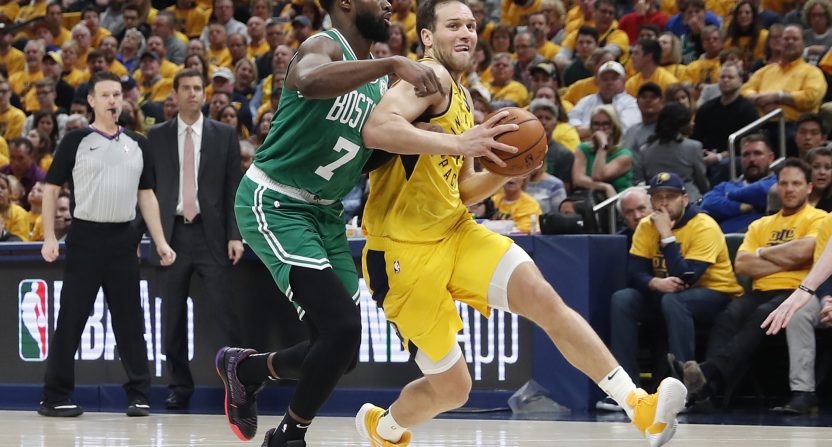 The Pacers’ 104-96 home loss to the Celtics leaves Indiana 3-0 down in their opening round series. Barring a miracle, the Pacers season will come to an end, possibly as early as Sunday afternoon.

It’s rare that fans can be both relieved and angered by their team’s elimination, but that’s where many Pacers fans likely are right now. Angry because an injury to their star robbed them of what looked like a potentially deep run. Relieved because watching Indiana try to grind opponents down on the defensive end while simultaneously figure out a way to score enough points to win despite possessing, on any given night, just two or three very good offensive players had grown very tiring. And maybe frustrated a bit, too, because the Pacers could have won any of these games.

The stat of this series: the Pacers, according to ESPN Stats and Information, have gone 12-for-40 from the field through three games on uncontested shots. Sums up Indiana's offensive ineptitude, and Boston's 3-0 series lead.

That’s a pattern dating back to last year, when the seven-game series loss to Cleveland featured two blowout wins by Indiana and five games that were collectively decided by 16 points, none greater than four. Indiana actually finished the series with a +40 point differential, but lost anyway. The Celtics series, meanwhile, has seen the Pacers take second half leads in every contest, only to look completely lost on offense for lengthy stretches, unable to unlock Boston’s defense.

It’s been a long, weird season for Indiana, and this seemingly inevitable loss to the Celtics is in many ways the perfect cap.

After what was pegged by many as a great offseason, Indiana at first looked every bit the Eastern Conference contender, blending tenacious defense with an offense built around rising star Victor Oladipo. After Oladipo went down for a few weeks with a knee injury, the team responded by going 7-4 without him, a stretch that looked very promising; last season, after all, the Pacers were 0-7 in games Oladipo missed. This, many reasoned, was a sign of a deeper, more well-rounded team.

That may have been true, too, but we’ll never know. Oladipo’s devastating quad tendon tear in January changed the entire calculus for the Pacers; GM Kevin Pritchard had stacked the roster with veterans on expiring contracts, expecting to take a run this season with Oladipo, see how he played with young players like Myles Turner and Domantas Sabonis, and then revamp the core as necessary via plenty of cap space.

Instead, the Pacers didn’t really learn much of anything that can help them going forward. Sure, Bojan Bogdanavic looked like a more than capable wing scorer and shooter, but the Pacers kind of knew that already. Thad Young is obviously a versatile veteran who fits the Pacers defense-first system, but the Pacers knew that, too. Head coach Nate McMillan, meanwhile, is obviously competent, and pushed the right buttons with this group to get them to the finish line of the regular season in fifth place despite not having Oladipo for 46 games.

All that said, the Pacers head into the offseason with just three players (Oladipo, Turner, and Sabonis) projected to be in their top-seven rotation next season under contract. Depending on how you feel about Doug McDermott and Aaron Holiday, they might only have three of their eventual top-nine players under contract; that’s how it worked out this year, after all. Young, Bogdanovic, Darren Collison, Cory Joseph, Wes Matthews, Kyle O’Quinn, and Tyreke Evans are all unrestricted free agents. (Evans, Matthews, O’Quinn, and one of either Collison or Joseph will almost certainly all be gone.)

why are the Indiana Pacers

While that means the Pacers are theoretical players in the world of max contracts, stars like Kevin Durant aren’t coming to Indiana.  It puts Kevin Pritchard in a difficult spot; do you try to bring back the heart of the core and run it back around a hopefully healthy Oladipo? Doing that would be committing to a roster that, while solid and at times very good, hasn’t looked like a match for the best teams in the East, outside of last year’s playoff series against the Cavs. But blowing everything up also feels weird, given the way the team did manage to come together, and the brief glimpses we saw with a healthy Oladipo early in the year.

The Pacers have valued consistency for a long time, and they probably don’t get enough credit for what they’ve managed to do. They haven’t picked higher than #10 in the draft since 1989, and they’ve only missed the playoffs once since 2010. (Even that was in 2014-15, and they almost nabbed the #8 seed despite playing most of the year without Paul George following his own devastating injury.)

But Indiana hasn’t won a playoff series since 2014, and at a certain point continuity becomes mediocrity. Even the bigger moments of change, like the firing of Frank Vogel after the 2016 season, led to the promotion of then-assistant McMillan instead of a broader coaching search. But while McMillan certainly deserves credit for holding the team together this season, it’s also very fair to wonder why his Pacers seem to lose more than their share of coin flips in the playoffs.

They basically hand the ball off to Bojan Bogdanovic and say, “Do something.” Kind of like a kid who does a magic trick, but is still holding the quarter in his hand, in plain sight, for everyone to see.

In fairness to Nate McMillan and the Pacers, this was always going to be an uphill battle, because they’re playing without Victor Oladipo. It was a great accomplishment to go 21-21 this season without their star player after going 0-7 without him last season.

I really like Indiana, and have a soft spot for Little-Engine-That-Could sort of teams. But they need some reinvention.

They could use more firepower. But they need better schemes.

The Pacers aren’t going to let McMillan go, not this offseason. But it’s something to keep an eye on; if his best attribute was his ability to connect and motivate this roster, it’s hard to argue he’s the best coach to connect with a roster that could see major overhauls. (Also worth noting: McMillan struggled to integrate Evans and McDermott, their two main offseason acquisitions.) And if the Pacers instead decide to bring back as much of the current roster as they can, have we seen the most the current staff is able to do with this collection of players?

They’re about to have a lot of decisions to contemplate, and they’ll be doing that thinking a lot sooner than they hoped to before Oladipo’s injury. What an odd year.