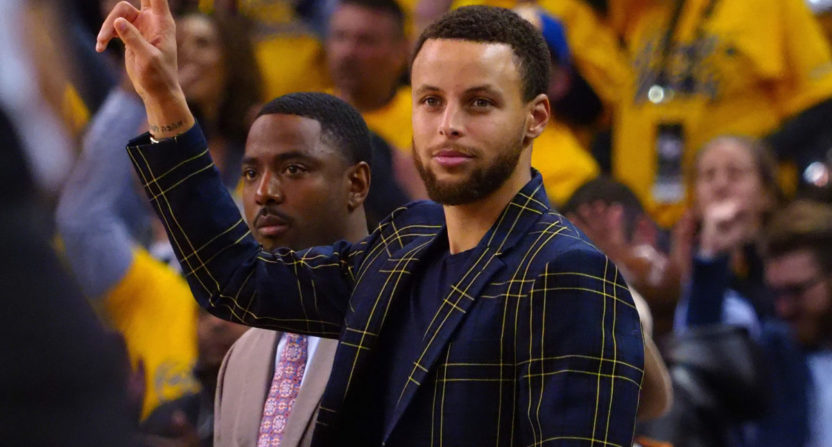 The Warriors took Game 2 over the Spurs last night, and if you just saw the 116-101 final score, you might think they cruised to a second straight home win to start the series.

If you read the AP game story, even, you might come away with a similar impression:

Stephen Curry watched another lopsided win from the bench in sheer delight, wearing a sport coat and big smile.

The steady hands of Kevin Durant and Klay Thompson certainly have made the two-time MVP’s absence far less daunting for the defending champions so far in these playoffs.

That was the lede! There was more:

As Curry remains out likely for the entire series nursing a sprained left knee, the Warriors used all the offensive power they had to take both home games in the best-of-seven series.

“No one can make up Steph’s contributions individually,” Thompson said. “That’s got to be done as a team and even then it’s hard with the way he can shoot the ball.”

Thompson has found his touch after missing two weeks in March with a broken right thumb.

He followed up his brilliant 11-for-13 shooting day in a 113-92 Game 1 rout Saturday by hitting 12 of 20 shots. Durant also had six rebounds and six assists for the Warriors, who went without key backup big man David West down the stretch after he sprained his left ankle early in the fourth.

The thing is, the Warriors are playing the Spurs, who themselves are missing a top-5ish player in Kawhi Leonard. Gregg Popovich has been forced into starting Rudy Gay at small forward (and for 37 minutes) in search of any semblance of offense. (Also Gay is only 31. It feels like he’s been in the league for fifteen years by now.) The Spurs only hit 4-28 from three-point range, which Popovich pointed to as the difference, according to ESPN’s Michael C. Wright.

“I was pleased with them tonight,” Spurs coach Gregg Popovich said of his players. “They executed the game plan wonderfully. Their physicality was great. We were aggressive, played very well. But the ball has to go in the basket. That’s the difference in the ballgame. They shot [48.4] percent from 3. I don’t know what we shot — 14 percent, 4-for-28. That’s tough to overcome.”

San Antonio’s 14.3 percent accuracy from 3-point range in Game 2 registered as its second-worst percentage from long distance in a postseason game (minimum 20 attempts) since 1997-98, Popovich’s first full season as head coach, according to research from ESPN Stats and Information research.

And despite all of that, the Spurs were up six at halftime, and leading well into the third quarter. They were down just five at one point in the fourth quarter. To the Spurs, who are basically LaMarcus Aldridge (who was awesome) and the ghosts of Manu Ginobili and Tony Parker right now. The Warriors have Kevin Durant, Klay Thompson, and Draymond healthy; they should be stomping this Spurs team.

That they’re not shows a few things. First and perhaps most obviously, the importance of Steph Curry to what the Warriors do cannot be understated. He’s a transformational talent, and essentially an offensive cure-all; there’s really no such thing as a wasted possession if it ends with a Steph shot, even if it’s from thirty feet out with the shot clock expiring.

Second, though, is how lucky the Warriors were to get the Spurs in the opening round. With Kawhi, of course, that would be an entirely different story, but Kawhi isn’t playing. The Rockets have a much more difficult opponent in the 8-seeded Wolves, for example, a matchup that would likely have troubled Golden State much more than this Spurs team has so far. It’s not San Antonio’s fault (well, maybe Kawhi’s a little), but they’re just not a good team right now. They’d struggle to compete with any of the East’s top five squads, too.

The Warriors are lucky, because even if Steph comes back as soon as possible from his knee sprain, it’s going to take a little time for him to get back to speed. This series was exactly what Golden State needed.

The rest of the West must be thrilled about that.