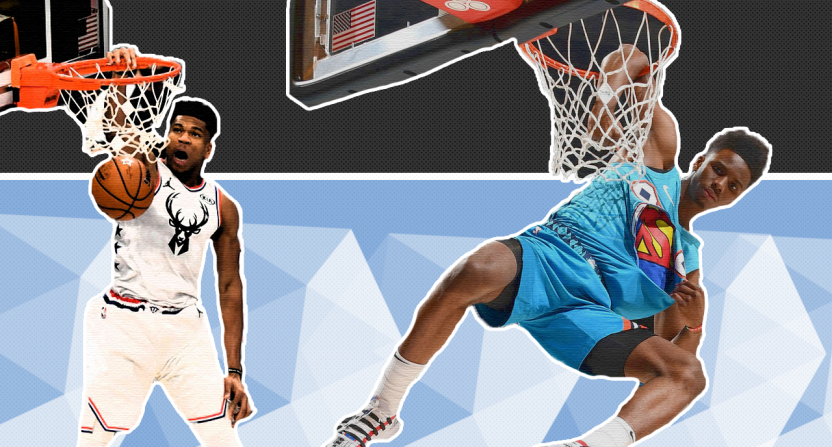 The NBA is currently as athletic as it has ever been, meaning fans have been blessed with a variety of highlight slam dunks during the 2018-19 season. This year, there has been a bit of everything when it comes to dunks. There have been epic poster dunks, seemingly impossible slams thanks to incredible individual athleticism, and dunks with blatant disrespect directed towards opponents. It’s been a great year for throwdowns and the season isn’t even over. Here are the ten of the best dunks so far this season.

Brooklyn Nets’ center Jarrett Allen has established himself as a fearless shot blocker this season with big-time rejections on stars like Giannis Antetokounmpo, LeBron James and Blake Griffin. However, one poster dunk he could not stop came courtesy of New Orleans Pelicans’ center Anthony Davis.

After pump-faking a Brooklyn defender out of his shoes at the three-point line, Davis launched from inside the free throw line to hammer a Statue of Liberty poster on Allen. Kudos to Allen for attempting to block it, but he was on the wrong side of a great dunk.

At 19, New York Knicks’ rookie Kevin Knox has had an up-and-down rookie season in New York. Still, nobody will forget this poster on Philadelphia 76ers forward Ben Simmons.

After seeing Jimmy Butler sleeping on the play, Knox cut to the rim and took a DeAndre Jordan bounce pass straight to the rim. Simmons attempted to block the shot, but the 19-year-old threw down on him, sending the All-Star to the floor as he hung on the rim for major style points.

Sometimes dunks are elevated by what comes after the play. In this case, Mario Hezonja walking over Giannis was one of the most hilarious moments in the NBA this season.

After Antetokounmpo failed to chase down and swat a Hezonja dunk, the Knicks small forward decided to pull an Allen Iverson and disrespectfully walk over his opponent. It was a great, unnecessary reaction. What makes the dunk better is that it was the only two points Hezonja scored against the Knicks. Antetokounmpo later threatened to “punch him in the nuts” after the game.

When Chicago Bulls guard Zach LaVine gets the ball on a breakaway, he is expected to do something magnificent. Back in December, the two-time NBA Slam Dunk Contest champion pulled off a classic windmill dunk against the Mavericks from just inside the free throw line. In this case, Dennis Smith Jr. made the right decision to back off and let LaVine do his thing. It was a remarkable show of athleticism on LaVine’s part, who absurdly makes dunks like this one look effortless.

👀 Look at what Boogie Cousins just did to Kuzma!

On the pick and roll, DeMarcus Cousins obliterated Kyle Kuzma, who probably should have made a business decision and moved the hell out of the way. Instead, the Lakers sophomore opted to try to draw the charge and was sent to the floor. Kuzma put his hands up in the air after the play in an attempt to play off getting posterized, but Cousins’ stare down says it all.

With Willy Hernangomez meeting him at the rim, Ross threw down the Kobe Bryant inspired up-and-under dunk. His athleticism was on full display as he finished at the rim, a spot where most guys would just try a reverse layup. Ross might be the best in-game dunker in the NBA.

While the 2019 Slam Dunk Contest was largely a bust, this dunk from Oklahoma City Thunder rookie Hamidou Diallo was worth the perfect scores it received from judges.

With the Superman logo showing underneath his ripped jersey, Diallo climbed the 7’1″ Shaq and threw down a Vince Carter-inspired elbow dunk. On hops alone, Diallo’s dunk was impressive. But, by paying homage to the GOAT dunker and throwing over the Hall of Famer, the 20-year-old created a top-ten dunk contest dunk ever.

Giannis showed his mean side on this nasty dunk, using a screen and roll to embarrass Detroit Pistons forward Jon Leuer.

After dribbling around Pistons’ defenders, Antetokounmpo used his length to explode at the rim. Leuer should have let the ‘Greek Freak’ do his thing. Instead, he tried to block a shot with both his hands and ended up on a poster. Giannis served his opponent at the rim. It was vicious. Leuer didn’t stand a chance.

Derrick Jones Jr. has some of the best hops in the NBA and has routinely thrown down huge slams in his young NBA career. On Monday, Jones Jr. threw down the best dunk of his career.

In garbage time against the Toronto Raptors, Jones flew in the air to slam home a one-handed dunk. It’s similar to the famous Superman dunk Dwight Howard pulled off in the 2008 Slam Dunk Contest, as he sort of threw it opposed to dunking it, but Jones Jr. somehow pulled it off in a game. It’s a dunk that gets better each time you watch it. Jones Jr. is a beast at the rim.

1. Giannis slams a bounce pass at the All-Star game.

This dunk is still hard to comprehend.

In the 2019 All-Star game, Stephen Curry threw a bounce-pass alley-oop that appeared to be mistimed. Giannis, being the ‘Greek Freak,’ somehow soared straight in the air and met the ball with his head above the rim, slamming it home. The dunk personifies Antentkounmpo’s length, as he’s probably the only NBA player who’d be capable of pulling it off. It was straight-up amazing, and will be remembered as one of the best dunks ever.