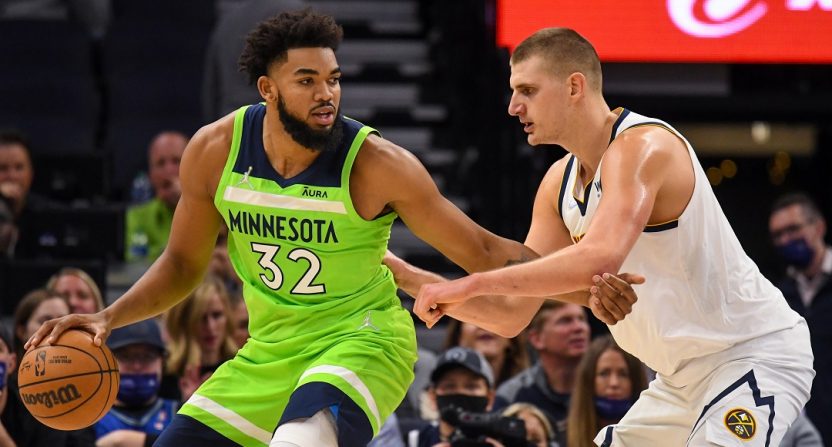 If there’s one thing we thought we knew about the Minnesota Timberwolves, it’s that they know how to put the ball in the hoop. And we know that they’re not as adept at stopping the other team from doing the same. Their best players are offense-first, sacrificing defense for slick shooting and on-ball creativity.

So far in 2021, though, the Timberwolves are getting by on their defense, and it’s not working all that well. After a 3-1 start, they’ve lost five straight games. They rank 11th on defense and 26th on offense. That defense ranking was a product of a soft early schedule, and during their five-game losing streak, their defensive rating is a poor 111.3.

This is not how it’s supposed to be for the Wolves. Anthony Edwards, just about holding steady at the start of his second season, is explosive off the dribble with a tight handle and a silky step-back jumper he can go to whenever he wants. D’Angelo Russell is a former All-Star point guard who can shoot threes and run the offense. Coming off the bench is Malik Beasley, another money shooter who sacrifices defense for offense. And Karl-Anthony Towns is the central piece, one of the league’s best centers and a hyper-efficient scorer.

The Timberwolves are built to score, but they haven’t been able to do it yet this season. In a wide-open Western Conference, and with a rejuvenated Towns extra motivated coming off a difficult two years, Minnesota was supposed to make a real run at the playoffs. They’re going to have to score if they’re going to do anything of substance in this important season with their prime superstar.

The problem in Minnesota is how to constantly involve Towns. When he’s shooting the ball, good things usually happen: in a season in which much of the NBA has started cold, Towns is at a scorching 46 percent from three on 6.7 attempts per game, and a 59.9 percent effective field goal percentage. He’s averaging 23 points per game.

But Towns is inexplicably tied for second on the Wolves in shots per game, at 16.3, the same as Russell. Edwards is attempting a staggering 21.8 shots per game, and he’s sporting a measly 47.7 effective field goal percentage, including 31 percent on nine threes per game. Russell isn’t much better, and Beasley has been similarly cold.

The shot distribution is not favorable. The Wolves offense has a way of devolving into a “your-turn, my-turn” style, a product of their limited group of offensive players. They have their collection of four good shooters and creators, who mostly can’t play together due to defense, and everyone else is either a complete offensive minus, a backup center, or a three-and-D guy. It’s all or nothing with this team, and it’s not conducive to a more ball movement-oriented style.

Using Towns as a fulcrum would have the mutual benefit of getting him more shots and getting the offense moving in a way it hasn’t been. The Wolves could learn from Nikola Jokic and the Denver Nuggets.

Towns isn’t an all-seeing genius passer like Jokic, but he has elite feel and has shown how well he can pass. He can make quick decisions and find cutters:

The above play is an example of how shooting gravity and spacing on the perimeter can create opportunities. Russell, even though he has been poor shooting the ball this season, has Desmond Bane attached to him, and uses his quickness to evade him in space. Towns has pulled Steven Adams out to the perimeter, taking him away from the lane and preventing him from getting in front of that bounce pass.

Minnesota has run into difficulties with lineups that feature multiple poor shooters. In 71 minutes with both Josh Okogie and Jaden McDaniels on the court, they have an offensive rating of just 98.7 (though the defensive rating is an outstanding 90.7 in those minutes).

Cuts like the above are a way of circumventing poor spacing. Run the offense through Towns on the perimeter and have Russell and Edwards fly around him. Giving Russell and Edwards hand-offs, a la Jokic and Jamal Murray, would get them the ball on the run, and Towns can pop for threes or roll to the basket.

Another way of getting around the spacing problem is using porous shooters like McDaniels and Jarred Vanderbilt as screeners. When they’re screening, it means they’re not standing idly in the corner. McDaniels has the kind of bouncy athleticism needed to finish at the rim:

And when others are used as screeners, Towns can either space the floor as a deadly shooter or act as a more traditional finisher at the rim:

The above offense has healthy movement that disjoints the defense. The original Towns hand-off leads into a Beasley-Vanderbilt pick-and-roll, and both Beasley and Vanderbilt make great passes to create the bucket. This sort of movement, involving multiple players, is something the Wolves have lacked.

The pick-and-roll game overall should be a lot better than it is. Towns has a tendency to set weak screens, failing to give his ball-handler an advantage, and they can be slow to get the play going:

Edwards is very much still developing his craft as a pick-and-roll ball-handler. He’s averaging 3.3 assists and 3.0 turnovers per game. His motives are very shot-first, and he can sometimes miss passes in pursuit of step-back jumpers and rampages to the rim. Watch him settle for a difficult mid-range turnaround:

The Timberwolves have Edwards run pick-and-rolls as a ball-handler frequently, which is good for his development, but they haven’t worked. Last season, on 6.4 possessions per game, the Wolves scored just 0.79 points-per-possession on Edwards pick-and-rolls, and that figure is at 0.77 this season — showing up in the 38th percentile of NBA ball-handlers.

The shot-making and craft are where Edwards’s superstar potential is evident. After all, it’s not easy to average 23 points per game in the NBA. He has the footwork to generate pull-up and step-back threes for himself, and those will start falling. His handles are advanced; he’s elite at generating separation off the dribble:

That strong left-handed dribble completely wrongfooted Bane and gave him a lane to the hoop (and notice how that play came on a dribble hand-off).

A key for the Wolves will be getting Edwards to operate within the offense. Too often, Towns drifts out of the game. The Wolves have to keep him involved and avoid getting bogged down in difficult three-pointers and isolations.

It’s worth noting that Towns has a lot of room to improve in one area of his game that would be a good way to keep him involved: post-ups. Towns posts up at a frequent rate — he has the sixth-most total post-ups in the league this year — but he passes out of them most of the time (just nine shot attempts on 55 post-ups) and turns it over way too often. This season, he has just one assist and 11 turnovers on post-ups, and the Wolves score just 0.74 points per Towns post-up, one of the worst figures in the league among high-volume centers. He was in the 35th percentile last season.

His 4.3 turnovers per game this season are by far a career high, and they have actually come on decreased assists, so it’s not like his play-making has increased. Towns can be loose with his handle, and commits way too many offensive fouls.

The talent on this team is too good to be languishing among the worst offenses in the league. Russell, Edwards, and Beasley should start shooting the ball better, which should help. But there’s no doubt that the Wolves aren’t doing enough to consistently generate good looks, despite having an unprecedentedly skilled offensive big man. KAT is the key, and the Wolves have to start treating him like it.