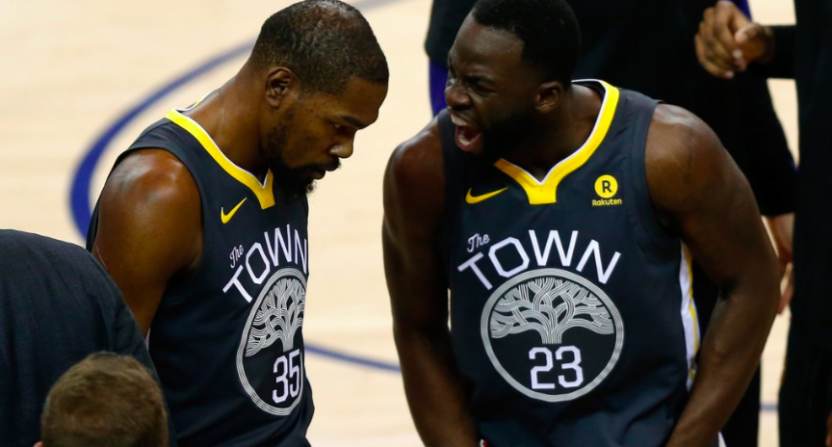 Declaring the end of a sports dynasty is a tricky business. Just ask anyone who said Alabama football was dead at some point in the last five years. Certainly, the Golden State Warriors dynasty is still in full swing. All of the key players are still there. The team remains near the top of the standings, having learned like so many dynasties that they don’t need to dominate during the regular season, but merely just remain good.

However, given the personalities, egos, and paychecks involved, the odds are against this dynasty lasting that much longer. Or at least not in this form. Having fulfilled his goal and potentially walking out of the Bay Area with three titles after this season, it’s presumed that Kevin Durant will head someplace else where he can be the megastar again. Big personalities such as Draymond Green are always a wild card and could potentially talk their way out of town at any given time.

Those two issues came to a head on Monday when Green and Durant got into a verbal exchange near the ends of the Warriors-Clippers game, which Golden State lost in overtime. At the time it appeared that Durant’s competitiveness lashed out at Green over some mental mistakes (though Durant did seem to mouth “that’s why I’m out” afterward). You might assume that cooler heads would prevail following the game.

Underrated part of KD vs. Dray:

”That’s why I’m out” 🧐 pic.twitter.com/ukEsbKNgMv

However, that’s not what happened at all. According to ESPN’s Marc J. Spears and Adrian Wojnarowski, the conflict continued when the team returned to the locker room after the game.

After the 121-116 overtime loss to the LA Clippers, some witnesses described the closed-door exchange as one of the most intense of this Warriors era. No one had to be separated, no player left his seat and no hint of physicality loomed in the setting, sources said.

Durant’s impending free agency heightens the sensitivity of the turmoil.

The organization is taking seriously the fallout of Monday night’s confrontation, spending Tuesday working through the issues that may have been created — or even advanced — within the team’s dynamic, league sources said.

The Athletic’s Shams Charania followed that up with a bit more context about the nature of the tiff.

Sources: In midst of verbal exchange on court late in Monday's game, Draymond Green challenged Kevin Durant about Durant's impending free agency. As teammates came at Green about his turnover, he responded. This has been a simmering issue for the Warriors today.

But then things went up a notch when it was revealed that the team suspended Green without pay for the game instead, costing him a little over $120K.

Update: The @warriors are suspending All-Star forward Draymond Green (@Money23Green) for Tuesday's game against the @ATLHawks for "conduct detrimental to the team." https://t.co/y0Ma48RKLT

The specific reason Green was suspended was that he repeatedly called Kevin Durant a “bitch” during the altercation, per Yahoo! Sports’ Chris Haynes.

Given that the Golden State Warriors are not only in the midst of a rare NBA dynasty but are about to move into a state-of-the-art arena in San Francisco that they need to make their money back in, it’s in their best interest to let Kevin Durant know that his well-being is their biggest concern. The Warriors won a title before he got there but they aren’t nearly the unbeatable force they are right now without him. If they had to choose between Green and Durant, they will most certainly choose Durant.

And maybe that pushes Green out of the door this off-season. Or maybe Durant has already made up his mind to leave. Or maybe they’ll smooth it over, both of them will get back on the same page, and the Warriors will waltz into the NBA Finals and cruise to another title. It’s impossible to tell right now.

So if anyone tells you this is the beginning of the end, don’t believe them just yet. But that also doesn’t mean the signs aren’t there…