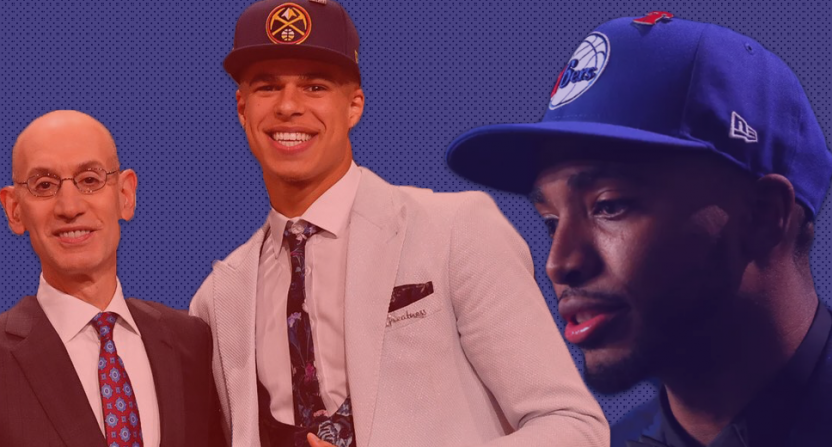 The 2018  NBA Draft wasn’t nearly as dramatic as previous years, but it still featured some great picks, some not-so-great picks, and some decisions leaving us speechless.

Here’s our look at the winner and losers of the draft.

With the Phoenix Suns selecting Deandre Ayton and the Sacramento Kings going a little off the board to take Marvin Bagley, the third overall pick was a coveted asset, mainly because Real Madrid guard Luka Doncic was still on the board. Dallas smartly made the move giving up a future first-round pick to move up two spots to grab the potential franchise player.

Blockbuster trade leaves Dallas with a sure thing and Atlanta with a big risk https://t.co/LfleJMPnjo pic.twitter.com/R9th5vtCs6

Doncic is a great shooter and ballhandler, has superstar potential, and is among the most polished prospects available. A backcourt pairing of Doncic and Dennis Smith Jr. gives the Mavs one hell of a future. To move up and snag Doncic at such a low cost was impressive.

Stripping head coach Doc Rivers of his GM duties before the beginning of last season and elevating Lawrence Frank to the position was a great move for the Clippers’ future. Frank’s keenness to draft and develop young talent (unlike Rivers who whiffed constantly) was on full display Thursday night.

The Clippers managed to get one of the top-rated point guards in Kentucky’s Shai Gilgeous-Alexander, moving up one spot (at the low cost of two second-round picks) in a deal with Charlotte. Los Angeles is thin at the position and adding Gilgeous-Alexander gives the team their first legitimate young building block.

The organization would have gotten an A+, but with the following pick, Frank picked Boston College guard Jerome Robinson. It’s not a horrible selection, but it’s a bit questionable, especially with Michael Porter Jr. on the board.

Porter appeared to be a lock in the top-five, but medical concerns pushed the talented Missouri big man to the Nuggets. Porter’s injury history is a major red flag and there’s definitely a reason he slipped. But getting a player with superstar potential late in the lottery has to be commended. It’s a risk, but one with tremendous upside.

Would the Toronto Raptors trade one of their stars to get into the lottery? Would the Grizzlies package Chandler Parsons horrid contract with their pick to save money? Would a superstar get traded? The answers, sadly, were no, no, and no.

There wasn’t a single roster player traded in the first round. Meh.

— Philadelphia selected Mikal Bridges 10th overall and traded him to the Phoenix Suns for the 16th overall pick (Zhaire Smith) and a 2021 first-round pick (originally owned by Miami).

Honestly, the 76ers could have forfeited their pick and still had the most enviable young talent. But Villanova small forward Mikal Bridges seemed like the perfect complementary piece to what they’re building. He also has deep connections to the city- he was born there, played at ‘Nova, and his mom works for the team!

Sixers draft Mikal Bridges (whose mom is a Sixers team executive), trade him to Phoenix within an hour https://t.co/8cz0cioGzi pic.twitter.com/bobwPEDuBk

Smith is a fine player, but Bridges’ story — and the fact he’s the more talented basketball player — made the move a bit confusing. For those who thought the 76ers abandoned their asset building ways, you were wrong. But in this case, Bridges was probably better than Smith and whoever gets drafted in three years.

The Bulls don’t make this list for making bad picks, but instead for making extremely predictable, safe picks. Carter — a center who was a one-and-done pick out of Duke — will be a fine pro. Hutchison — who spent four years at Boise State — has potential to be a three-and-D guy, but he can’t really shoot anywhere else.

Both players should be fine pros. But, there’s no superstar potential here. Moving up and grabbing Doncic or trying to hit a home run would have been the correct play. Their picks were completely uninspiring.