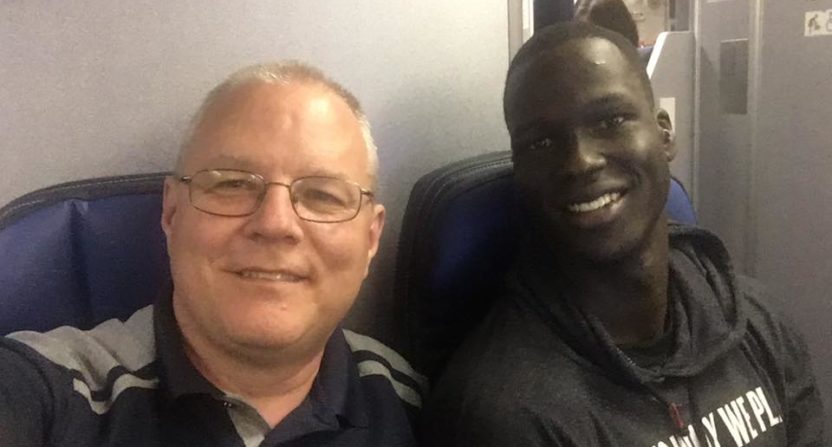 Flight delays are never fun for travelers, and just about nobody will ever want to give up a seat in first class regardless of the circumstances. But most people are not Thon Maker. The 7-foot-1 Milwaukee Buck deserves whatever extra leg room he can get, but when it came time to volunteer his seat in order to get his flight moving, Maker was the MVP of his flight.

On a United flight that had some passengers booked from other flights, the flight attendants were working to find volunteers willing to relocate their seats in order to accommodate all of the passengers booked for the flight. Finding volunteers to move from their seat to a less ideal seat on the plane is often a difficult task, but one United passenger, Paul Kuzma, was kind enough to volunteer to move his seat. He went on to describe his experience on Facebook, with the highlight being the moment he saw a tall basketball player giving up his Economy Plus seat to sit in the back row of the plane by the bathroom. It turned out to be Thon Maker.

Alas, it was too good to be true! Moments later, a 7’1″ tall young man who could not even stand completely straight in the aisle of the plane made his way our direction. My heart sunk, not for me, but for him! I saw him emerge from an Economy Plus window seat!

I told him I was so sorry, knowing this would be uncomfortable for him. He nonchalantly said it was worth it to get this delayed flight going. He had practice to attend in the morning and had a 2+ hour drive to get where he was headed after landing.

“Who do you play for?,” I asked, thinking it would be a college. He answered, “the #MilwaukeeBucks.” I tried to not show surprise and asked how long he’d been with them. This is his 2nd year.

It’s funny that Kuzma had no clue who Maker was at first (he admits to being a football guy with little to no knowledge about basketball, which is understandable). The real takeaway here is Maker was willing to do whatever he needed just to get to practice the next morning. Giving up his prime seat to sit in one of the least desirable seats on the plane is a testament to his character. But there was more to the story as well.

Kuzma went on to say Maker had already moved his seat once. After being booked on the flight after missing a  previous flight, Maker was given a first class seat. He had to give up that seat, however, when the passenger who originally booked the same first class seat had shown up for the flight. This moved Maker to an economy plus seat.

He couldn’t even fit his knees into the Economy seat! Every time the snack cart came by or someone had to use the restroom, he had to get up and move out of their way.

The entire flight, there was not a hint of resentment in his voice.

Class act indeed. Here’s hoping the United flight staff at least offered Maker some extra snacks, as if he would accept them anyway.