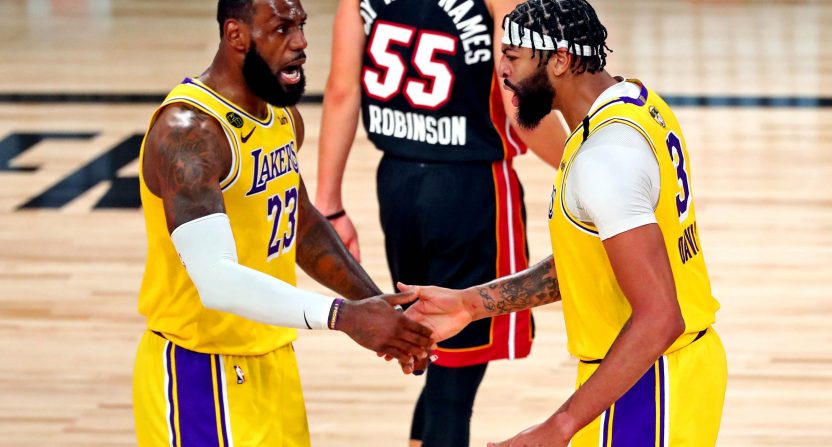 The Miami Heat have had an incredible run to the NBA Finals, but they have a much more difficult test in this series vs the Los Angeles Lakers. And the Lakers made that clear in a 116-98 Game 1 victory. The game was a bigger blowout than the score indicates, with the Lakers leading by as many as 32 points.

Here are our three main takeaways from the Lakers’ Game 1 win:

When the Lakers are hitting their threes and free-throws, good luck

The Lakers are 13-of-19 on threes. In case having LeBron James and Anthony Davis didn't already make it unfair enough for opponents. pic.twitter.com/o9JEBWO5O0

By the time they cooled off on the triples, the game was already out of hand.

Oh, and they were fantastic at the charity stripe, nailing 25-of-27 free-throws. That’s good for a 92.6 percentage. It’s hard enough to slow down LeBron James and Anthony Davis. And when the Lakers are pouring in threes and making their free throws, they’re downright unstoppable.

The Heat — like everybody else — had no answer for Anthony Davis

Anthony Davis is a big, big problem for the Heat. The ‘Brow’ had 34 points, nine rebounds, five assists, three blocks, and finished with a game-high +23 plus-minus. He was also the biggest reason for the Lakers’ remarkable night at the free-throw line, going 10-for-10.

But the 6’10” big man with guard skills is a matchup nightmare for Miami, and it’s hard to see them slowing him down too much in the rest of this series.

And then there’s LeBron James, who chipped in a ho-hum 25-point, 13-rebound, nine-assist performance.

This series already feels dangerously close to being over

Game 2 is a must-win for Miami; they simply do not have the firepower to beat the Lakers four times in five games (as long as LeBron and AD are healthy, of course). And that’s pretty concerning after how lopsided Game 1 was- both in the box score and to the eye test.

Erik Spoelstra has done a remarkable job coaching this season, and the Heat certainly bring the effort every game to max out their roster talent. But their opponent may just have too much star power this time. This series may not even make it to a Game 5, especially if Adebayo and/or Dragic are seriously hurt.

Update: The Dragic injury news is not good. ESPN’s Adrian Wojnarowski reports that Dragic “has suffered a plantar tear” of his left foot.

The crafty veteran averaged 16.2 points and 5.1 assists for the Heat this season, and he’s averaged 20.9 points in the playoffs. This is a huge loss for Miami.

Update II: In a follow-up tweet, Wojnarowski says that Dragic “has been able to put pressure on his left and hasn’t ruled out returning to play in the NBA Finals.”

Dragic has been able to put pressure on his left foot and hasn't ruled out returning to play in the NBA Finals, source tells ESPN. https://t.co/Ea1LeqncBL