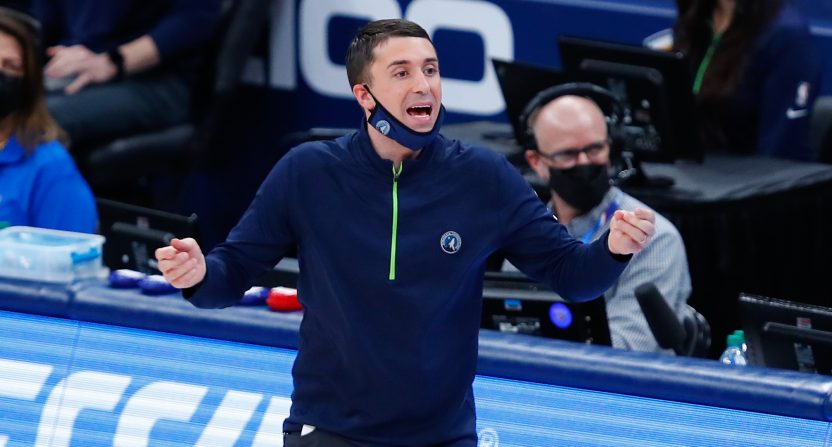 Ryan Saunders is out in Minnesota, and they already have a replacement in Raptors assistant Chris Finch.

Saunders was in the middle of his second full season as head coach of the Timberwolves, having taken over when Thom Thibodeau was fired during the 2018-19 season. Saunders amassed a 43-93 record in charge in Minnesota. He’d been with the organization since 2014, when he was an assistant under his late father, Flip Saunders. That family connection to one of the biggest figures in franchise history complicated things a bit, but in the end the Wolves front office pulled the plug early during a disappointing start to the season.

The Timberwolves won’t immediately name an interim coach tonight, sources said. Minnesota has dropped 24 of 31 games to start the season, leaving them with the worst record in the NBA. https://t.co/WDcZRSkl9b

Woj’s tweet seemed to signal a deliberate hiring process, but Shams Charania almost immediately broke the news that Saunders has a successor:

So Woj wasn’t technically wrong, as the Wolves indeed didn’t bother naming an interim coach at all. Finch, meanwhile, was a head coaching candidate last offseason with the Pacers and elsewhere. Now he reunites with executives he’s worked with in the past:

Minnesota president of basketball operations Gersson Rosas and Finch worked together with the Houston Rockets. https://t.co/UqRkccfCRo

Hiring a coach off another staff during the season is uncommon, but Toronto wouldn't stand in the way of Finch's chance to become a head coach now. Finch had success as a G-League head coach, and has interviewed for several head coaching jobs in recent years.

The Raptors doing this now makes a lot of sense for them, especially as they had a candidate in mind. If they liked Finch this much, making this move during the season essentially eliminates any competition for his services. It also gives the franchise a jumpstart on how they’re going to be playing going forward.

Minnesota is at the very bottom of the Eastern conference, and they might end up hanging onto their top-3 protected first round draft pick. There are still a lot of games to be played this season, and any kind of transition issues they can get out of the way now that let’s them get out of the gate faster next season can only help. It also gets Finch into the locker room, which combined with getting the current roster into his system allows the team to make more informed personnel decisions this offseason.

Saunders is still incredibly young, and should be able to land another job at some point. Finch, though, is the new Wolves front office putting their own spin on the organization, and getting to it as quickly as possible.