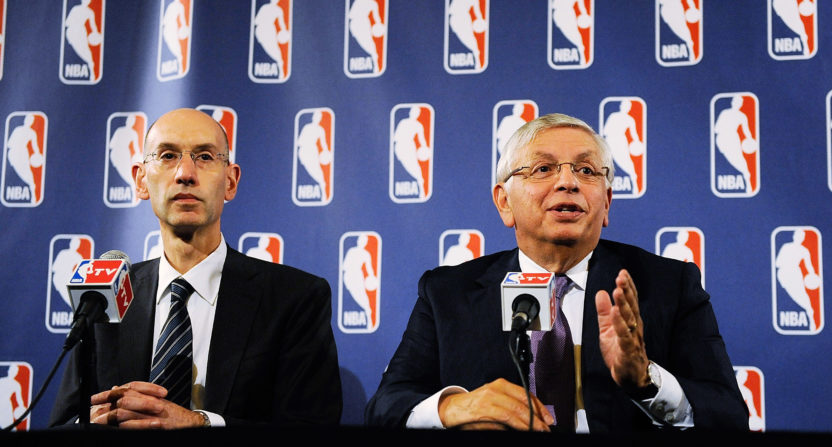 On Wednesday, Uninterrupted released a documentary about former NBA player Al Harrington’s post-basketball career as a marijuana entrepreneur. In the short film, ex-NBA commissioner David Stern told Harrington that he was “now at the point where personally I think [marijuana] probably should be removed from the banned list.”

Also on Wednesday, Gallup released a poll suggesting that 64 percent of Americans think marijuana should be legal.

Wednesday’s happenings only reinforced what has become increasingly clear: that the time has arrived for sports leagues to shift their attitudes on marijuana. For the benefit of their athletes, commissioners need to emerge from the war-on-drugs era and stop testing their players for pot, while advocating for its legalization as loudly as they can.

Historically, American sports leagues have had little choice in how to handle Mary Jane. For decades, the drug was illegal in every state and viewed widely as a societal ill. When athletes were caught smoking weed, the infraction was an embarrassment or worse to their teams and their sports. Reputations were ruined by simple possession charges. As Stern told Harrington, the perception that players were potheads was damaging to the NBA’s image, so the league and its counterparts in other sports felt obligated to crack down. The decision to punish players for getting high has never been courageous, but given the politics of the past 100 years, it has been essentially unavoidable.

But a few things have changed in recent years. Most notably, marijuana has become permissible in states from Massachusetts to Alaska. As of this writing, weed is legal for recreational use in eight states and the District of Columbia and is legal with a prescription in 21 other others. In related news, national public opinion has shifted gradually, as conveyed by the Gallup poll released Wednesday. No longer do most Americans (or even most Republicans) see marijuana as some sort of evil gateway drug threatening the safety of the nation’s youth. Pot is now seen for what it is: a non-addictive drug no more dangerous (and arguably less dangerous) than alcohol or tobacco. This shift has been accelerated, perhaps, by the country’s raging opioid crisis, which accounted for many of the 52,404 drug overdose deaths in the United States in 2016. Many researchers and advocates have come to wonder whether the epidemic could be lessened if pain were treated with marijuana instead of opiates. To many people, weed is not a vice but a necessary tool of relief.

Athletes, to their credit, have been advocating for marijuana legalization for years. Ricky Williams rebelled against the NFL’s ban during his playing career and has spoken many times since his retirement about weed’s benefits for athletes. Eugene Monroe might have lost a job over his outspoken opinions on marijuana. Clifford Robinson, like Harrington, opened a cannabis business. Jim McMahon, Jay Williams, Derrick Morgan, Jake Plummer, Kyle Turley, Bill Walton and others have demanded weed be legalized in and out of sports.

And yet leagues keep testing for marijuana and suspending players who come back positive. Athletes such as Josh Gordon and Martavis Bryant have had their careers derailed for using a drug that is now legal in numerous states. Yes, NBA commissioner Adam Silver has said he is open to softening the league’s stance on weed, and the NFLPA and NFL are working on a study into its benefits as a pain-management tool. But still, NFL commissioner Roger Goodell remains firmly against legalization, and Major League Baseball continues to crack down (while expressing outrage when proud pothead Wiz Khalifa wore a “legalize it” shirt during a first pitch). No major American sports league has taken substantial action toward lifting its ban.

By remaining obstinate on weed, leagues are actively hurting their players, who genuinely consider the drug the best tool for treating their pain, especially when the alternatives are dangerously addictive. There are many reasons to lighten up on marijuana, from the need to alleviate mass incarceration to the likelihood of increased tax revenue for state governments. But from the perspective of sports leagues, there is one very simple one: Players would be healthier if they are allowed to smoke pot.

With public opinion in favor of weed, medical researchers optimistic about its pain-relieving benefits and the nation increasingly aware of the risks of painkillers, leagues are running out of excuses to leave the drug banned. For the good of their athletes, they should be lobbying legislators to legalize marijuana, not suspending their athletes for using it.