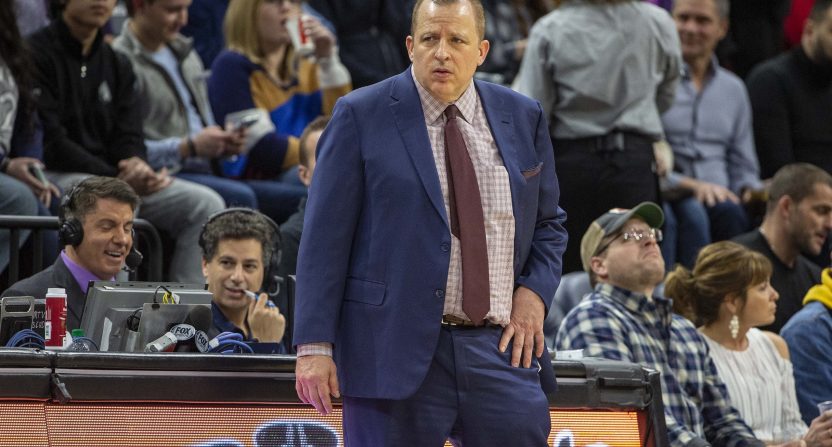 The New York Knicks pulled Tom Thibodeau out of a recycling bin. The NBA loves its secondhand coaches and Thibodeau is reportedly the latest to find a new home.

Instead of making a bold choice, the Knicks went with a safe option. Thibodeau is solid, capable. If you need a coach to get your team to the playoffs, he can do that. Thibodeau has made the postseason six times in his eight seasons, and his career winning percentage is .589. He guided the Chicago Bulls and the Minnesota Timberwolves to the playoffs.

But Thibodeau has also been living off his early head coaching success for a long time. He has been fired twice – by the Bulls in spring 2015 and by the Timberwolves mid-season in January 2019. And now, Knicks management is giving him a chance to rejuvenate his career in the hopes he can lead New York to its first playoff appearance since 2013. And again, if the goal is to simply get into the postseason, Thibodeau is a logical hire.

However, if the goal is to build a championship contender – something the Knicks realistically have not been in two decades, is Thibodeau the right fit? He seems out of place in an NBA that is a lot different from when he coached a young, spry, and healthy Derrick Rose and the Bulls.

Thibodeau, 62, has the reputation of being a defensive taskmaster who burns out players by playing them too many minutes. He first made a name for himself by being a “defensive coordinator” assistant from 1989 through 2010, including a stint with Knicks (1996-2004).

Thibodeau was so good for so long at his job. It also made some wonder why he couldn’t land a head coaching gig. He finally got his breakthrough shortly after being on the staff of the Boston Celtics who won the 2008 NBA championship under Doc Rivers. Those Celtics of Paul Pierce, Kevin Garnett, and Ray Allen were routinely one of the best defensive teams in the league.

That success led him to landing his first NBA head coaching job with Chicago in 2010. Seemed like a home-run hire when Thibodeau’s Bulls (62-20) had the NBA’s best record in his rookie season. The Bulls owned the league’s top defense, Thibodeau was named Coach of The Year, and Rose won the MVP. And while they lost to LeBron James’ Miami Heat in the 2011 Eastern Conference Finals, this should have been the start of something special.

But Thibodeau has never been able to repeat that success. Rose got hurt and permanently lost the explosiveness that made him special. Without a healthy Rose, Chicago never returned to the conference finals. Still, the Bulls were a consistently good, and it came as a shock that Chicago fired him five seasons.

Minnesota took a chance on Thibodeau in 2016, hiring him not only as coach, but giving him more power as the president of basketball operations. The Timberwolves hoped that he could unlock the potential of youngsters Karl-Anthony Towns and Andrew Wiggins. Minnesota, thanks to the trade for Jimmy Butler, made the 2018 playoffs. But the following season, after starting 19-21, Thibodeau was ousted again.

So here comes Thibodeau to save the Knicks. Like his previous two jobs, he has some young players to work with. RJ Barrett, Mitchell Robinson, Kevin Knox, and Frank Ntilikina are all 22 years old or younger. The Knicks have the fifth-youngest roster in the league. Inexperienced teams often struggle but there is the possibility for growth. In particular, Robinson and Ntilikina have shown the raw defensive skills Thibodeau loves.

But can Thibodeau adapt to the new NBA?

He’s notorious for playing his starters heavy minutes. When he was with the Timberwolves in 2017-18, Taj Gibson, Jeff Teague, Wiggins, Towns, and Butler were all in the top-36 in the league in minutes played. According to Steve Aschburner of NBA.com, it was the first time since the 1986-87  Boston Celtics that a team had five starters among the top-40 in minutes per game.

At least the Celtics got an NBA title out of that mileage. The Timberwolves were bounced in the first round of the playoffs.

Those numbers are alarming considering Thibodeau was also accused of overusing Joakim Noah and Rose in Chicago. Thibodeau can’t coach that way anymore and expect to survive. Not in this world of load management. Teams are a lot smarter about resting their players over a grueling 82-game season.

There’s something else that should worry the Knicks- the NBA has evolved into a three-point game. As noted by elitesportsny.com, in Thibodeau’s two full seasons with the Timberwolves, they were last each year in three-point baskets and three-point attempts.

Load management and three-point shooting are here to stay. Thibodeau can either embrace the new NBA or get left behind. Thibodeau is smart, but has also shown to be stubborn. Maybe he learned something during his time away from the NBA.

If so, perhaps the Knicks have found an undervalued asset in the recycling bin.