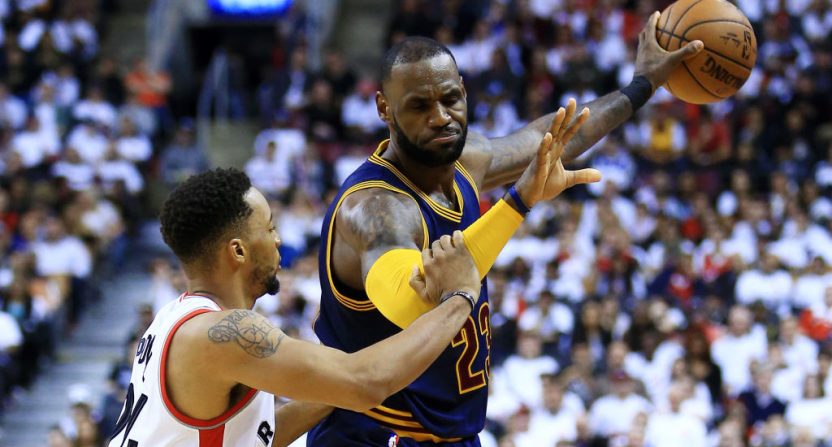 The NBA’s Eastern Conference still belongs to LeBron James until proven otherwise. However, a glance at the current standings shows a conflict of team-building styles that could define the East’s future.

None of the rosters are particularly “home grown,” but some at the top have shaken things up more than others.

Surprisingly sitting in first place, the Toronto Raptors have done little to their roster in the past year. Resting on the team they’d constructed around DeMar Derozan and Kyle Lowry has worked as Toronto’s stayed healthy. In Boston, big roster changes yielded bigger expectations. Though even after the Gordon Hayward injury on night one, the team’s been one of the league’s best all season (despite the recent slump).

Cleveland’s wholesale changes at the trade deadline were a last-ditch effort to make the nucleus of that roster (James, the injured Kevin Love) work out. Washington made a couple bench additions last summer, opting to ride with (the now-injured) John Wall and Bradley Beal. Indiana hit a hard reset in the offseason, getting rid of Paul George, and it actually worked. Milwaukee stood pat like others, hoping for better health (which didn’t happen).

Many of these team-building strategies look very different from one another. But they’ve all succeeded to one extent or another. Not that LeBron James is necessarily slowing down. But teams in the East are preparing for the eventual end of his career (or at least his dominance). Rosters are being constructed for right now in Boston, Toronto and Washington. Though elsewhere, eyes are clearly looking a little bit further down the road.

If Cleveland manages to win yet another Eastern Conference title, it creates a definitive answer for most franchises: LeBron is going to win until he can’t anymore. That doesn’t mean top teams should quit and really, the Celtics are well-positioned to contend for years with a good mix of young talent and veterans. It’s just a note that the wait might be longer than initially expected.

Should Boston take the East (especially in light of Hayward’s injury), that’s a sign you can out-do Cleveland with a mix of young talent and big signings/trades. If Toronto can overtake both — and right now, the Raptors have shown an ability to do so — it could yield more hope for the teams looking to grow their talent the old-fashioned way.

That doesn’t mean Toronto failed to spend money or acquired players to get to this point. But standing pat while Boston and Cleveland upped the stakes in a budding arms race could end up proving prudent if the Raptors get to their first NBA Finals. Toronto’s not “small market” necessarily, given the size of the city and the fact that the Raptors are Canada’s only team. Still, the state of the Canadian dollar and the exchange rate relative to the U.S. always puts them at a slight disadvantage on the free agent market.

Teams like Milwaukee and Indiana don’t have the latter problem, but can suffer from some small-market concerns. The Pacers rebooted with an injection of youth and the breakout of Victor Oladipo. Milwaukee’s drafted well while adding pieces that fit a defensive-minded system. Even the 76ers, while not a small-market team by any means, operated as one for years and now see the potential payoff coming. If Toronto can hold onto top talent and acquire enough pieces around Lowry and DeRozan to take a legitimate shot at big-spending Cleveland and Boston, then why can’t everyone else?

That, in part, is what can inspire a concerted tanking effort on the part of the East’s lesser squads this year. Teams like Atlanta, Orlando, Chicago, New York and Charlotte all have incentive to lose in order to keep picking up pieces to build around. Some of these teams already have a player or two. Others could use that true franchise star to truly begin the rebuild.

That idea of a rebuild is what intrigues most fans of today’s NBA, which is swamped with super teams. It’s tough to call any of the league’s top franchises a true rebuild at this point. Golden State, Cleveland, Boston, Houston and San Antonio are all loaded with big-name signings from the last few years. But beyond the money being tossed around, there are still hints on how to break through (other than “just draft the next Steph Curry or LeBron James”).

Boston went in on draft picks to engineer a quick turnaround with youth before the savvy acquisitions. Toronto had to hit reset before rising to the top of the East. Over in the West, Minnesota took forever to get “back.” But once they had the young players like Karl-Anthony Towns, it became much easier to acquire the finishing touches like Jimmy Butler.

Teams like Cleveland are very tough to create. But they also win. Teams like Boston are potentially tougher to construct, but have the promise and potential of winning for a longer stretch. Most teams are probably in the same bucket with Toronto or even Milwaukee, however. Draft well and make minimal amounts of changes, and hope the earth shakes enough around you that you wind up in contention. Whether that contention equals a legitimate shot at a title, however, is still to be determined. This spring will go a long way toward figuring it out.