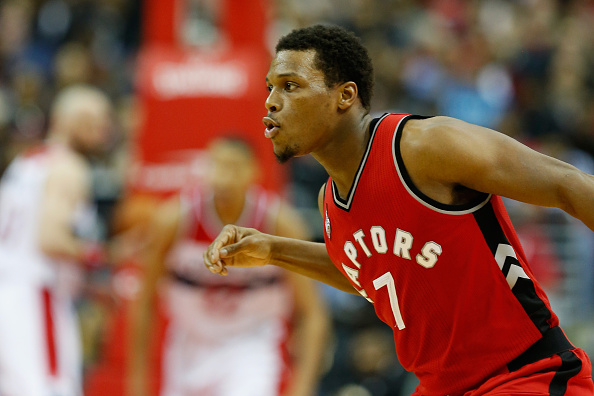 These aren’t your old Toronto Raptors.

The Toronto Raptors snuck up on the rest of the NBA over the last three seasons, progressively improving their record while filling out an impressive roster. Two Atlantic Division titles didn’t mean squat with two first-round playoff exits, but the Raptors excelled in 2015-16, proving to be among the top teams in the East. Toronto added a third-straight Atlantic Division title last season, winning a franchise-record 56 games in the process. More importantly, the Raptors didn’t lay an egg in the playoffs, getting within two games of the NBA Finals, before bowing out to the title-winner Cleveland Cavaliers in a six-game series.

Still, with three division titles and recent playoff success, the Raptors haven’t gotten the respect they deserved. Few prognosticators chose the Raptors to win the East (which is fair), with a surprising amount not even picking them to win the division. (The Boston Celtics led most polls.) Through 21 games, the Raptors have risen above those preseason predictions and performed like an elite team.

The Raptors are tied for first in the Eastern Conference with 14 wins. The club leads the Eastern Conference (third in the NBA behind Golden State and Houston) with 110.9 points per game. Toronto has the best plus/minus differential in the conference at +8.1 and the third-best NBA net-rating at +9.7. In the past six games before Monday’s matchup against Cleveland, the Raptors beat Houston by 13, Milwaukee by six, Philly by 27, Memphis by 15, the Lakers by 33 and Atlanta by 44. The Raptors aren’t just winning, they’re destroying their competition. Dwane Casey’s squad is taking care of the basketball offensively and defensively, making Toronto hard to beat.

So what’s propelled Toronto’s elevated play? It starts with DeMar DeRozan. I covered DeRozan’s hot start in a previous article, but to summarize: he’s gone into Kobe-mode. In the first year of a max contract signed this summer, DeRozan has provided stellar return on the deal. Averaging career-bests across the board with 28.0 points per game, 4.3 assists, and 5.2 rebounds, the 27-year-old has rounded his game to an elite level. It’s only 21 games, but DeRozan is making smarter decisions and making ridiculous shots look easy.

Behind DeRozan is a reliable group. Point guard Kyle Lowry is the bulldog who makes Toronto’s offense run. He continues to pass and shoot the ball effectively (42 percent from deep), while continuing to make the teammates around him better. He and DeRozan are a formidable 1-2 punch. Center Jonas Valanciunas has limped as of late, but he’s still an efficient scorer and rebounder. A healthy DeMarre Carroll also provides a much-needed consistent 3 and D wing, who does many little-needed things.

Outside the main starters, the Raptors appear in good shape. Rookie Pascal Siakim’s started in place of the injured Jared Sullinger, playing above his late first-round draft status, providing shot-blocking and ample energy to the floor. The 22-year-old excels on the fast break. After getting the mid-season yips, Patrick Patterson is once again bringing it on both sides of the ball as the sixth man. He is shooting the three well while providing Toronto with whatever’s asked defensively. When Patterson struggles, it hurts. Terrence Ross has been unusually consistent, while backup point guard Corey Joseph has given the club tough minutes behind Lowry. Norm Powell has stepped in as a super sub. And the at-times uncontrolled Lucas Nogeuira has even given the Raptors solid minutes at times.

Pascal Siakam sends one into the stands! #WeTheNorth pic.twitter.com/OQIHVTT4NB

Everything is clicking for Toronto. The club’s depth is among the strongest in the league. Everybody in the rotation can contribute in a steady manner. But the Raptors aren’t without weakness.

Without a defined third scorer and starting Siakim, a rookie without much offensive touch, at the power forward, Toronto has little chance of overtaking Cleveland.

Case in point, the Raptors hung tough, but lost at home on Monday against the Cavaliers, 116-112. Toronto battled all night, down just one at halftime, but a poor third quarter sunk a comeback attempt. The Raptors can keep pace with the Cavs, but there’s a clear gap talent-wise. The Raptors simply don’t have an answer for LeBron, Kyrie Irving and Kevin Love, who combined for 86 points. DeRozan and Lowry tallied 55 points total, but only two other Raptors scored in double-digits. Siakim and Patterson aren’t equivalent to Love and whoever else Cleveland can bring in off its bench.

Another issue is that Toronto ranks 26th in defensive rebounding (31.7) and needs to acquire a legitimate rebounder and scorer in the frontcourt to take that next step. The perfect candidate might be available: Atlanta’s Paul Millsap.

With the Hawks struggling to stay above .500, if Atlanta chooses to blow its team up, Millsap would fit in perfectly with what the Raptors are doing. The 31-year-old is likely on the last year of his current contract, as he’ll surely decline his $21 million player option for next season. He would provide the Raptors with a big who could stretch the floor, is an efficient passer (3.5 A/PG) and one of the league’s best defensive rebounders (6.4 DRB/G).

Millsap would take pressure off Siakim and the second-unit and give Toronto an outstanding, more complete lineup. Acquiring Millsap would be tricky. A deal would likely involve a couple youngsters, like Powell and Delon Wright, a first-round draft choice and contracts (Ross at $10 million + more) to make it work. That might not be enough. But the Raptors, unlike some teams, do have assets to make a deal work.

Without the deal, a healthy Sullinger will help. But the Raptors still need to upgrade at the four to get on Cleveland’s level. Regardless, Toronto has proven over the past few seasons as a legit playoff threat and distinguished themselves as the second-best team in the Eastern Conference. However, as shown on Monday night against Cleveland, there’s a missing component needed to take the next step. The Raptors are title contenders who deserve respect, but they might not get it until they keep up with the Cavaliers.