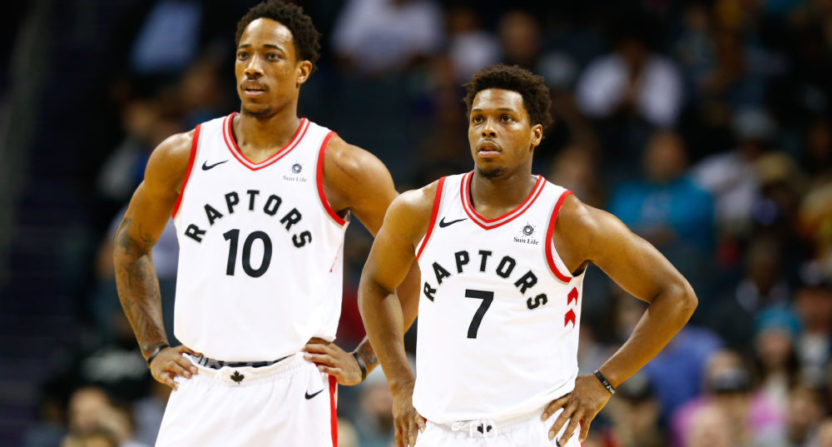 Despite the fact that LeBron James hasn’t lost an Eastern Conference playoff series since 2010, you’d be forgiven for thinking that this was the year it would happen.

The No. 1 seed Toronto Raptors won 59 games this year while going a blistering 40-12 against the rest of the East. Toronto was 1-2 against James’s Cleveland Cavaliers this season, but the losses were close. Plus, the rest of LeBron’s Cavs teammates had been no-shows during a difficult seven-games series win over the Pacers in round one. Their lack of production even inspired a Saturday Night Live skit about just how much Cleveland was a one-man show.

And yet… LeBron did get enough help while demolishing Toronto in four games during this year’s second round; the third straight season the Cavs have eliminated the Raptors in the NBA Playoffs. Even considering Toronto’s franchise-record win total in 2017-18, there’s now the obvious question lingering over the Raptors:

What do they want to be?

“Championship contender” isn’t necessarily sufficient in today’s NBA, because it implies getting past LeBron, Golden State Warriors or both until proven otherwise. The Houston Rockets may be able to buck that trend this year, and usher in some hope for the rest of the league. But for the time being, Toronto, Houston and every other team appears stuck in some sort of limbo — wanting to compete, yet almost knowing the act of doing so is futile.

Waiting for LeBron to retire means wasting years of fan interest and goodwill, plus the formative years of players’ careers. However, if there’s any chance that James departs Cleveland or the Eastern Conference entirely this offseason, no team will be ready to blow the whole thing up just yet for risk of squandering a chance at contention.

Even without consideration for the current Warriors/Cavs dynamic in the league, though, there are far more examples of teams turning their wheels as second-tier contenders and failing than there are franchises that have successfully taken on the established order. Of late, teams like the Atlanta Hawks, Los Angeles Clippers, Portland Trail Blazers, Washington Wizards and Memphis Grizzlies have occupied similar places in contention purgatory. The Rockets were there too, before getting Chris Paul to try and elevate their standing (TBD). Infamously, the Oklahoma City Thunder offloaded James Harden years back and ended up downgrading their place in that pecking order.

While the Raptors don’t necessarily have a young James Harden on their hands, the roster has plenty of individual talent other teams would want, should they decide to perform any sort of deconstruction. DeMar Derozan and Kyle Lowry are both star-caliber players. Jonas Valanciunas is a very serviceable scoring big man. OG Anunoby and Fred VanVleet are budding young talents.

How many of those players stick around would depend on the level of shuffling President of Basketball Operations Masai Ujiri decides is necessary, too. There were doubters on #TheProcess in Philadelphia, but following a long rebuild, the 76ers have quickly vaulted into the same middle ground as Toronto — AND are situated to contend after the Raptors’ core ages. Just a few seasons after a 60-win campaign, the Hawks will try out the Sixers’ method for themselves, hoping to time the upswing when LeBron James reaches the end of his career.

Toronto starts with better assets than either of those teams did, but would also need to stick both the timing and landing to become an Eastern Conference force again amidst the youth-led charges by Philly and the Boston Celtics. One of those divisional foes for the Raptors will be playing in this year’s Eastern Conference Finals while Toronto’s run is already over. Those teams will only get more experienced. A teardown admits defeat, then banks on being able to best the Celtics or Sixers down the road. It’s not guaranteed, so is it worth a try when you have a team that’s a piece away from contention right now?

One potential short-term fix could be simply swapping out the coach, Dwane Casey. Since arriving in Toronto in 2011-12, Casey is 320-238 in the regular season and 263 of those came within the last five years. He’s led all three 50-win seasons in franchise history (all in the last three years).

But if THIS Raptors team wasn’t going to get over the hump with Casey at the helm, it’s tough to imagine any can — at least as long as LeBron’s in the East. There’s a lot of respect for what he and Ujiri have been able to build in Toronto. It just may be time to look elsewhere before completely scrapping this thing.

Because the Raptors’ cap situation does make it significantly tougher to commit to that latter option. Before even re-signing VanVleet, they’re locked into over $126 million in salaries for 2018-19 and there’s over $121 million committed for 2019-20. That’s a lot of roster spots and zero wiggle room to make a big name add. That means coaching is really the only way this improves in the short-term.

It should be a very interesting — and haunting — offseason in Toronto. But whatever happens, at should go a long way toward deciding what’s in store for the franchise’s legacy during the Ujiri/Derozan/Lowry era.