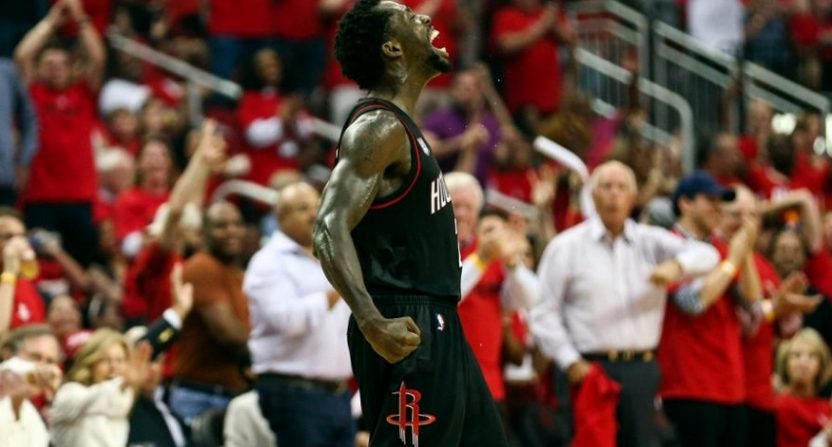 In a two-man race for the NBA MVP award, the battle in the first round between Russell Westbrook and James Harden can be viewed as a culmination of the season-long debate. Yet while Harden was phenomenal in Sunday’s Game 1 victory over the Thunder (37 points and nine assists), it wasn’t his head-to-head matchup with Westbrook that made the sole difference for the Rockets in their 118-87 blowout.

It was rugged Rockets guard Patrick Beverley’s matchup with Westbrook that was key to Houston’s Game 1 win.

Sure, he grimaced in pain and laid out on the court for a bit, but Beverley amazingly just got up, shook off the hit and then went about his business. Then, showing that he was not the least bit fazed by Adams’ hit, Beverley proceeded to nail a corner three a minute later.

Quite perfectly, Beverly celebrated the shot like he was some sort of Dragon Ball Z character.

Really, who else in the playoffs could do that after receiving a hit from Adams? For most players, getting hit like that would result in a trip to the bench to make sure they weren’t concussed or hurt or even just stunned. Yet for Beverley, it was just basketball. So he was going to continue to playing, not altering how he plays in the least bit or even remotely being fearful of Adams.

Adams is a mean S.O.B. and so is Warriors All-Star Draymond Green, but Beverley is a diminutive guard and his tenacity and passion when playing, especially on the defensive end, is unrivaled. Because of this, there is likely no better defender from the guard position than Beverley.

Beverley is the living embodiment of the chorus of Chumbawamba’s 1997 one-hit wonder “Tubthumping.” The Rockets guard gets knocked down, but then gets up again as nobody is never going to keep him down.

That’s just how Beverley plays though. He has never-stop type of attitude and competes as hard as he can every single second he plays. Beverley is surely a pest, which Westbrook became reacquainted with in Game 1, but he is also a solid offensive player.

They just went there. pic.twitter.com/BfA0GCZyG8

Next to Harden, Beverley was quite literally the second best player in Game 1.  Adding to his strong defensive effort, Beverley finished with a playoff career-high 21 points, 10 rebounds, three assists and two steals. He shot 8 of 13 and knocked down four three-pointers. Adding fuel to the MVP and head-to-head rivalry between Westbrook and Harden, the Rockets chose to highlight Beverley’s line in relation to the Thunder All-Star’s.

The message here is clear.

While Westbrook has been sensational all season, Beverley thoroughly outplayed him. It was yet another shot by the Rockets to disparage Westbrook’s MVP campaign. It was also a reminder to the Thunder that while Westbrook’s snarls and aggressive play has been part of his charm and MVP narrative, the Rockets have an even badder player in Patrick Beverley.