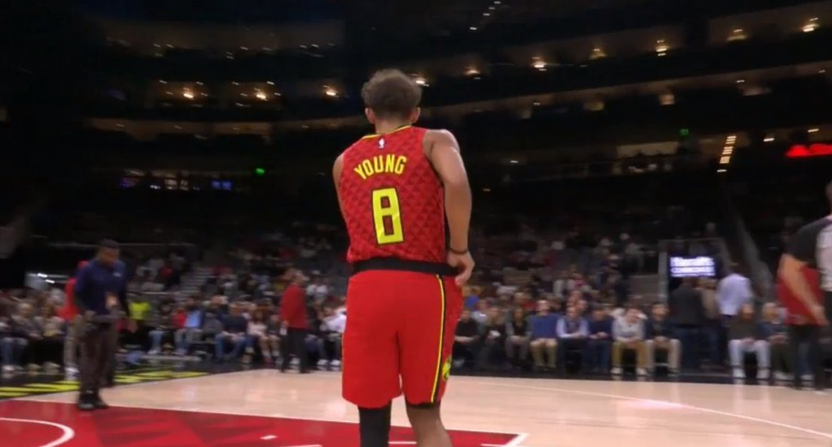 The world lost a basketball legend on Sunday, when Kobe Bryant and eight others — including Kobe’s daughter, Gianna — tragically died in a helicopter crash. The NBA chose to go on with Sunday’s games, and that’s understandably led to an extremely emotional day around the league. The tears have been pouring down.

Tyson Chandler clearly heartbroken. Not sure how these players are able to focus on the game. #Rockets pic.twitter.com/QlO0ByjsEI

But the tributes have also been pouring in.

Atlanta Hawks star Trae Young was close to Kobe and Gianna, and shared an emotional hug with his mother in the pregame.

Man, this is absolutely heartbreaking: Trae Young, who was close with Kobe Bryant and Kobe's daughter Gianna, came off the floor pregame and shared a long hug with his mom. pic.twitter.com/a2wJ5Fhu2x

Young then began the game wearing No. 8 in honor of Kobe.

Trae Young takes off his warm-ups to reveal he will be wearing number 8 tonight in honor of Kobe Bryant. pic.twitter.com/Ig0EZXmIdK

Young switched back to his traditional No. 11 during the game, but paid tribute to Kobe in another way: by nailing a 42-foot shot beyond half-court at the halftime buzzer. He also finished the game — a 152-33 Hawks win — with 45 points and 14 assists.

This…. from Hawks Trae Young…. from 42 feet at buzzer….. for Kobe pic.twitter.com/1JZYnj0VYh

The Toronto Raptors and San Antonio Spurs each took 24-second shot-clock violations to honor Bryant (who was also No. 24), and that trend continued throughout the league on Sunday.

The New Orleans Pelicans and Boston Celtics each took 24-second violations, for example.

Both the Pelicans and Celtics took 24-second violations to start tonight's game to honor No. 24, Kobe Bryant. pic.twitter.com/8EOBQkB5zX

And the Memphis Grizzlies and Phoenix Suns honored both of Kobe’s numbers, with 24-second and eight-second violations.

A powerful moment in honor of Kobe.

Madison Square Garden honored Bryant with a tribute before the New York Knicks’ game against the Brooklyn Nets.

And “KO-BE!” chants could be heard throughout the arenas, like after this moment of silence at the Nuggets-Rockets game in Denver.