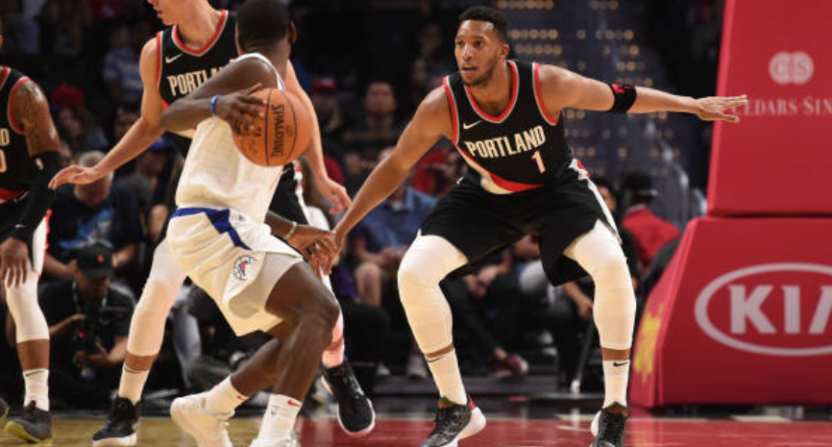 After finishing .500 with a first-round playoff sweep by top-seeded Golden State last season, the Portland Trail Blazers knew they had to step it up on the defensive end. Portland knew it could score with the best of them, but finishing 25th in points allowed per game and 24th in points given up per 100 possessions was not going to cut it anymore.

Through 20 games this season, the Blazers’ defense is vastly improved, up to third in defensive efficiency and fourth in points allowed per game. How has 12-8 Portland accomplished this despite having very little roster turnover from last season?

“Last year, we knew we lost a lot of close ones due to the fact of too high-scoring games, sometimes not being able to get a stop when we needed to,” wing Evan Turner told The Comeback.

Going into the offseason, Blazers head coach Terry Stotts put more of an emphasis on defense, and through a quarter of the season, it seems to be working because the players are focusing on that end a lot more.

“I think they maintain a consistent attitude about our defense going into the season, making that a priority, ” Stotts said. “They really stuck with it, more than anything else. And to make the jump that we’ve made is something we’re proud of.”

“You just see a little more urgency from all their players,” Nets head coach Kenny Atkinson said. “You see them really getting after it defensively.”

Portland is third in field goal percentage defense and second in effective field goal defense, a stat that weights threes more than twos in formulating the number. The defense gives up just 8.5 made treys per game, second in the league, and are eighth in allowed attempts per game, per Basketball-Reference.

“Over the last few years, we’ve always kind of done a good job at limiting threes,” Stotts said. “Teams shot the ball well from three against us last year, but didn’t get a lot of them.”

The numbers prove Stotts right. While Portland was sixth in limiting opponents’ attempts from three last season, teams shot 37 percent from three against the Blazers last season, the fourth-worst mark in the NBA.

“We try to make guys take low-percentage shots,” forward Ed Davis told The Comeback. “We live with long twos, mid-range jump-shots. We just stick to our schemes, try to protect the 3-point line. If you do that consistently on a nightly basis, you’re going to have success defensively.”

Teams attempt 10.5 shots per game against Portland from between 15 and 19 feet — or what would be classified as a long two — the second-most in the league, per NBA.com. In the data-driven NBA, these are generally known as the shots you want opponents to take.

“I think they get the analytical puzzles that we’re all posed with,” Atkinson said. “They understand what type of shots they’re giving up.”

While the Blazers are a middle-of-the-pack team in defensive rebounds, what sets them apart is how they limit second chances for their opponents. Portland allows an offensive rebound on just 22 percent of its possessions — third in the league, according to Cleaning The Glass. It’s a major reason why Portland gives up the eighth-fewest second-chance points in the game, per NBA.com.

Before Portland’s win in Brooklyn on Friday, Atkinson pointed out that the Blazers are the best rim-protecting team in the league. He’s right. Teams are shooting just 54.5 percent from the restricted area against Portland on 28.1 attempts per game, the top mark in the league per NBA.com.

Some of that may have to do with having a full season of center Jusuf Nurkic, who’s 16th in the league in ESPN’s Defensive Real Plus-Minus, but Portland was also number one last year in the restricted area last season.

“Guys are just too good to clamp down one-on-one,” Turner said, and that shutting down opposing stars is a team effort.

The Blazers have four players in the top 30 power forwards in DRPM and are known for having excellent defense from their bigs.

“A lot of our concepts stayed the same, but I do think we’re sticking with it better,” Stotts said.

The big men are also why Portland has had success against the pick-and-roll, especially in limiting the roll man to 0.93 points per possession, according to NBA.com, the fifth-lowest total in the league. The Blazers have been able to trust their bigs to switch onto guards late, doing well in situations where the offense believes it has an advantage.

“The reason teams run pick-and-rolls is to try to get mismatches,” Davis said. “And sometimes you get that mismatch and think it’s a mismatch, but it’s really not.”

Portland is also elite in its transition defense. Teams are only in transition on nine percent of their possessions against the Blazers, per NBA.com, the lowest percentage in the league. Opponents also score just 0.97 points per possession against Portland, second-lowest in the league.

Atkinson even singled out lead guards Damian Lillard and CJ McCollum for putting more of an emphasis on the defensive end.

“This is a point guard league right now and if we could slow these guards down, it just helps us out a lot,” Davis said, pointing out that if they were going to improve on that end, that those two needed to be a big part of it.

Turner noted that reputations in the NBA are hard to shed, and that it will take time for Lillard and McCollum to be known as plus defenders.

As we reach the quarter-pole of the regular season, Portland has heeded the message that to be a top team in this league, you need to be strong defensively.

“Every team has scorers. Every team has guys that can get it going to put up 100 points. It’s the defensive teams that have that success in the playoffs and go on those runs,” Davis said. “People always talk about Golden State’s offense, but their defense is the reason why they are as good as they are.”

The last three seasons the Warriors went to The Finals, they were in the top five in defensive efficiency each season. In order for the Blazers to even dream of approaching that level, they needed to make a big jump on defense. So far for Portland, mission accomplished.