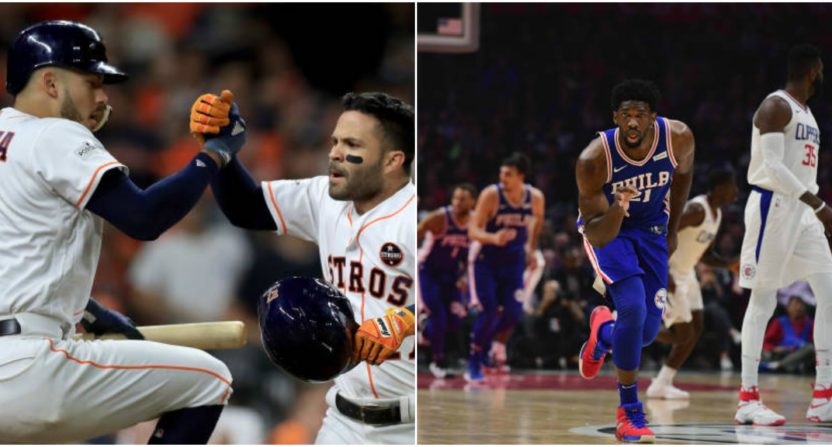 On Monday night, Ben Simmons scored 27 points and added eight rebounds, four steals and two assists, while Joel Embiid put up 15 points, 11 rebounds, three assists and two blocks, as the Sixers beat the Utah Jazz 107-86. With the victory, Philadelphia improved to 9-7 on the season, tied for sixth-best in the Eastern Conference. After years in the lonely wilderness of The Process,™ the Sixers have two of the best young players in the NBA, a winning record and a trajectory toward becoming a perennial postseason contender.

Philly’s early-season success comes mere weeks after its closest Process-adhering Major League Baseball analogue, the Houston Astros, won the first World Series in franchise history. Not long ago, the Astros lost 100 games in three consecutive seasons, earning the right to draft future stars Carlos Correa, Alex Bregman and Lance McCullers. This year, they stormed to the top of the league thanks in part to those very players.

Of course, what the Sixers and Astros called “trusting the process” is often instead decried as “tanking” and accused of eroding the very essence of competition that drives professional sports. It’s easy to see this argument. The act of losing on purpose, of building an intentionally bad roster for the sake of draft picks, runs counter to what sports are theoretically all about. If too many teams engage in the strategy at once, the league suffers from poor quality of play and the appearance of perverse incentives. But here’s the problem for people who make these points: Tanking, as we’ve seen this month, keeps working.

Yes, the Sixers had to take some licks to get to this point, winning fewer than 20 games in three consecutive seasons and becoming a punchline. And no, they have not yet won a title or even reached the playoffs, making it a bit premature to proclaim The Process a full success. But the fact is they have Simmons, a rookie point forward who plays like an evolved Magic Johnson, and Embiid, who stands seven feet tall yet is one of the most athletic players in the NBA. The Process also yielded useful role players Robert Covington and Dario Saric and a potential star in Markelle Futz, shaky start aside. There may not be a stronger young core in the league. After four seasons of ineptitude, the Sixers appear poised for a decade of success.

It’s almost indisputable that The Process, authored by deposed former GM Sam Hinkie, has improved Philadelphia’s future prospects. Without such a dramatic rebuild, what would the Sixers be right now? They might be the Hornets, who attempt every year to build a winning team and wind up either stuck in the late lottery or bounced in the first round of the playoffs. They might be the Hawks, who hung around as a solid playoff team for a few seasons but are now facing their reckoning. They might be the Kings, who are annually bad enough to pick in the top five but never bad enough to secure a future superstar. Instead, they’re a team about 26 others would gleefully swap futures with.

The Astros, it’s easy to forget now, were criticized endlessly during their lower-case process, for losing at a historic rate, for botching their No. 1 overall draft pick in 2014 and for posting several 0.0 local TV ratings. But right as the narrative turned forcefully against Houston GM Jeff Luhnow, his team began to win, making the playoffs in 2015, hanging around in 2016 and winning 100 games in 2017 on the way to a World Series title. After the Astros’ victory in Game 7 of the World Series earlier this month, Hinkie not-so-cryptically tweeted, “I love it when a plan comes together.”

Houston’s World Series victory was actually the second in a row for teams once derided for slow rebuilds. The Chicago Cubs didn’t bottom out as badly as the Astros, but they did lose 100 games for the first time in franchise history and average 94 losses over a four-year stretch. That’s how they wound up with Kris Bryant, Kyle Schwarber and Albert Almora. Before Theo Epstein was a hero on the North Side, he was actually somewhat of a villain, with “process” slipping from his mouth more than once.

You could argue that years of depressing blowout losses weren’t worth the end result for the Astros and Cubs, but you won’t find many fans in Chicago or Houston who agree. And sure, there’s always the risk that even a thoughtful and deliberate rebuild won’t bear fruit, but the two MLB franchises who rebuild most thoroughly certainly don’t regret it. The fact is, without quote-unquote tanking, the Astros wouldn’t have Correa, the Cubs wouldn’t have Bryant, and the Sixers wouldn’t have Embiid and Simmons,.

Opponents of tanking can still argue against the tactic globally, pointing out that it’s damaging for sports at large to have Hollis Thompson and Brian Bogusevic prominently involved in games that count toward the standings. This point has substantial merit But it’s increasingly difficult to posit that tanking doesn’t work. Results to the contrary are everywhere.

Maybe that’s why both MLB and the NBA have tweaked their rules recently to make losing slightly less rewarding, with baseball decreasing slot money for the team with the No. 1 pick and basketball lowering the worst team’s odds of getting the top selection. But with every Embiid dunk and Correa home run, the undeniable message of November 2017 becomes louder and clearer: Trusting The Process truly pays off.