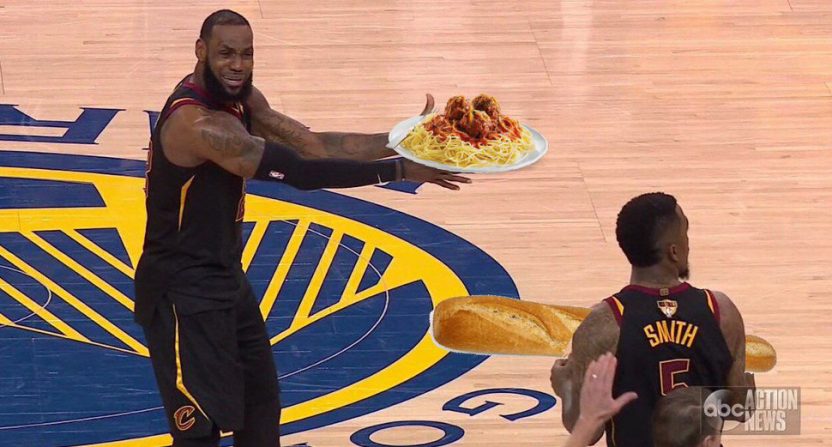 The Cleveland Cavaliers’ 122-114 Game 1 loss to the Golden State Warriors in Game 1 of the NBA Finals Thursday night had a lot to do with a spectacular miscue from the Cavs’ J.R. Smith. With the score tied in the final seconds of regulation, Smith grabbed an offensive rebound off a George Hill free-throw miss, but then, instead of going for a shot, setting someone else up or even calling timeout to draw up a play, Smith dribbled back towards the halfway line, then threw a last-second pass to Hill, too late to get up a shot. Cleveland then got blown out in overtime, and Twitter blew up with memes based on the spectacular shot of LeBron James yelling at Smith after the final fourth-quarter buzzer. Here are some of the best:

"This meeting could have been done in one email!" pic.twitter.com/GhkZufTaTT

'How the hell you gonna get fired on your day off?' pic.twitter.com/IauFWJVPzF

YOU AREN'T THE REAL BUZZ LIGHTYEAR, YOU'RE AN ACTION FIGURE. YOU ARE A CHILD'S PLAYTHING! pic.twitter.com/1ttgVPqK2X

"THAT'S how Han Solo got his name?" pic.twitter.com/qqUc9lrjAN

When you throw from the 1-yard line pic.twitter.com/7wVf8QZaDA

when I go to a restaurant but fill up on bread pic.twitter.com/aPykmi4h82

"This is why I HATE group projects." pic.twitter.com/E3kaSCjySo

There were plenty of funny tweets without that photo, too, including some from other NBA players:

Jr is on that henny lol pic.twitter.com/0GBhgXjVyt

And plenty from other people:

ah damn, "I made a decision because I wrongly believed I was doing better than I was" is jr smith making a modern art exhibition of like 10 years in my dating history

Suddenly, I realized hiring J.R. Smith as my financial adviser may have been a mistake.

I don’t think anything is a better example of LeBron James having to carry a bunch of terrible teammates than LeBron having to literally point J.R. Smith to the basket with the ball and three seconds left in a tie game

LeBron wishes he could fire JR. Just put in @AIRBUD instead.

To be fair to him, Smith said afterwards he knew the score and he thought head coach Ty Lue would call the timeout:

JR Smith: "I was trying to get enough to bring it out to get a shot off. I knew we were tied, I thought we were going to call timeout. If I thought we were ahead, I'd have held onto the ball and let them foul me."

But that doesn’t seem to really fit with what he’s doing there. And even if that was the plan, that’s a curious move, especially considering how many chances they had to get up an open shot. And these memes are going to be remembered for a while.