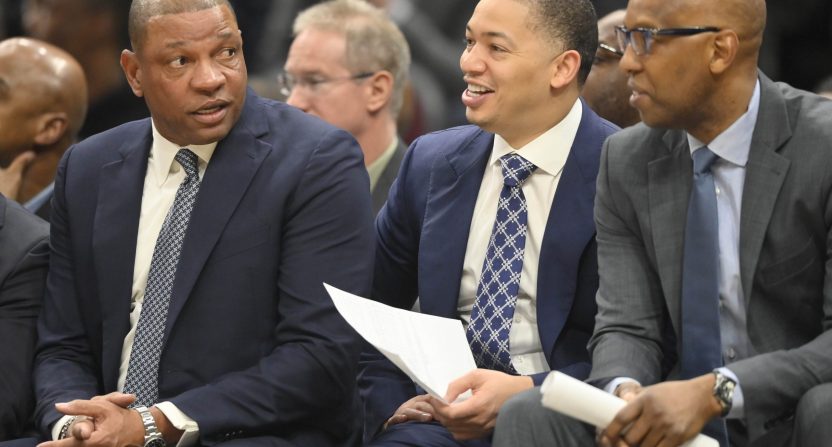 Ty Lue is taking a big shot at respectability.

Lue, the new coach of the Los Angeles Clippers, will try to join an exclusive club. If he can guide the underachieving Clippers to an NBA championship, he would become just the fourth coach in league history to earn titles with different teams. The only other guys to accomplish that feat are Phil Jackson, Alex Hannum, and Pat Riley. That’s basketball royalty. That’s the ultimate respect.

Rightly or wrongly, Lue is often viewed as just another coach who was lucky to have LeBron James. Few have received less credit for winning a title. That’s how it is when you coach LeBron. Only Erik Spoelstra has emerged from James’ immense shadow.

The rest of the guys who have coached LeBron are mostly just dudes: Paul Silas, Brendan Malone, Mike Brown, David Blatt, Luke Walton, and Frank Vogel. Spoelstra coached LeBron to his first two titles in Miami. But we probably didn’t fully appreciate him until he led the Miami Heat to a surprise run to the 2020 NBA Finals. Vogel guided James to the title in the bubble. Lue oversaw the greatest NBA Finals comeback when the James-led Cleveland Cavaliers rallied from a 3-games-to-1 deficit to beat the seemingly invincible Golden State Warriors in 2016.

Normally an accomplishment like that solidifies your place in history. Lue should have been the coaching equivalent of a Made Man. In his first three seasons in Cleveland, he went to the NBA Finals every year, including that championship in his rookie season when he replaced Blatt.

But usually LeBron’s coaches don’t get much respect once LeBron is gone.  How do we know this? After James left Cleveland (the second time) for the Los Angeles Lakers, Lue was fired when the Cavaliers started 0-6 during the 2018-19 season. You’d think some team would be eager to snatch up Lue, whose .607 winning percentage is better than Spoelstra’s .591.

Nope. Lue spent this past season as a Clippers assistant. It’s extremely rare, and humbling, for a coach with a championship pedigree to be a staff member. That move paid off in an unexpected way. When the Clippers blew a 3-games-to-1 second-round playoff lead to the Denver Nuggets, Doc Rivers was fired. Rivers out. Lue promoted.

Lue was fortunate to have LeBron. Now, he’ll have Kawhi Leonard. And like his stint in Cleveland, being the Clippers coach is both great and complicated. The big difference, however, is that if he can win a title with this team, Lue will get plenty of credit. He would’ve succeeded where one of the league’s most respected coaches, Rivers, failed.

Lue’s mission: Win the Pacific Division over the LeBron-led Lakers, who are favored to win the 2021 NBA title. And, likely, try to defeat James again in the playoffs. That’s a Herculean task, even though the Clippers boast one of the league’s deepest rosters.

What happened to the Clippers is puzzling and troubling. L.A. basically borrowed the Toronto Raptors’ blueprint of load-managing Kawhi throughout the regular season. It worked during the 2019 playoffs, as the Raptors won a championship and Leonard looked like the best player on the planet.

This season, due to COVID-19, things changed. Every team was well-rested heading into the playoffs. And the Clippers looked out of sync in the bubble, losing on buzzer-beaters to the Phoenix Suns and Dallas Mavericks. They kept blowing big leads and were shocked by the Denver Nuggets. Both Leonard and fellow star Paul George reportedly complained of fatigue.

There were chemistry problems too. Clippers players reportedly resented the star treatment given to Leonard and George. Chris Haynes of Yahoo Sports reported that during the playoffs series with Denver, George and Montrezl Harrell got into a heated verbal exchange during a timeout.

Rivers has a reputation for trusting his star players. Why not? They have made him rich and helped deliver him a championship with Boston. Rivers’ approach, however, may of cost him the locker room as well as his job. If Leonard and George wanted Rivers to stay, he would be still be in L.A. And if Leonard and George didn’t believe in Lue, he wouldn’t be the coach.

Rivers had been with the Clippers for seven seasons. Sometimes a fresh voice can make a difference. Lue’s previous stint with a superstar — LeBron — should serve him well. After all, Lue found a way to get James and mercurial star Kyrie Irving to co-exist for a while.

Lue must find a way to reach Leonard and George and have them better connect with their teammates. Everyone doesn’t have to be friends, but they must be able to trust each other.  On the court, Lue will try new things. The Clippers were 16th in the NBA in three-point attempts (33.5 per game). Expect them to shoot a lot more (They were sixth in three-point accuracy, at 37.1 percent).

This is a great opportunity for Lue. But the clock is ticking. Both Leonard and George can opt out of their contracts and become free agents after the 2021 season. The last time Lue lost that kind of star power, he soon found himself unemployed.

Lue will have to work quickly to earn respect.