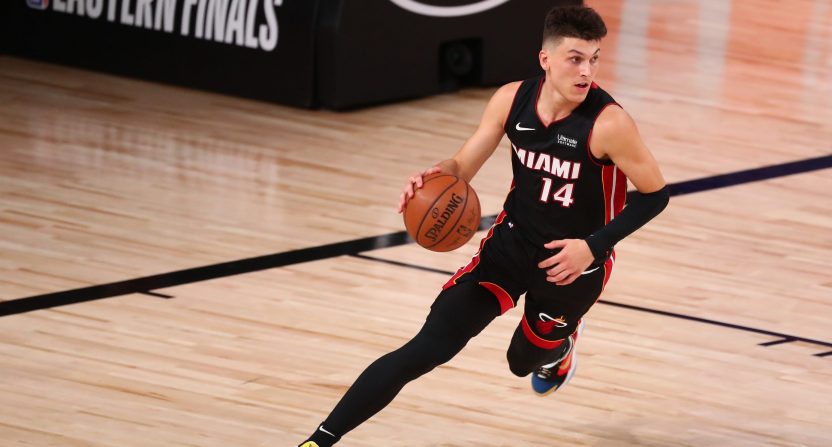 You can call just about any game in a playoff series pivotal, to the point it’s become a bit of a cliche. However, with the Heat up 2-1 heading into Game 4 of the Eastern Conference Finals, it really was appropriate.

Either the Celtics would tie the series at 2-2, or Miami would put Boston down 3-1, a deficit that seems fairly insurmountable especially given the lack of home court advantage in the bubble.

Unfortunately for Boston, Miami successfully achieved the latter, using a late run in the fourth quarter to hang on for a 112-109 win.

That was in large part thanks to, uh, heroics from Heat rookie Tyler Herro. Herro nearly doubled his age; he’s 20, and he ended up with 37 points off the bench.

Tyler Herro is 5-6 on ESPN! 🔥 pic.twitter.com/Rp9xDRmBnm

🔥 THIS ROOKIE IS COOKING! 🔥

Just a ridiculous performance from Herro, but as with all of Miami’s dominant playoff run (the win moved them to 11-2 in the postseason) he certainly wasn’t alone. Jimmy Butler added 24, Goran Dragic had 22, and Bam Adebayo finished with 20. That’s incredibly balanced scoring, and the Heat are playing amazing basketball. Plenty of credit for that goes to Erik Spoelstra, who has been putting on a masterclass all around.

Boston didn’t go quietly this time. It was close throughout, and while Jayson Tatum was held to an anomalous scoreless first half, he stormed back in the final two quarters with 28 points to keep the Celtics in the game.

It was too little, too late, though, and now Boston is in real trouble. Considering the Heat have only lost twice in the last few weeks against playoff competition, trying to beat them three times in a row is going to be a very difficult ask. But the Celtics gave Miami one of those losses, and Bam Adebayo did seem to suffer an arm injury of some kind late in the game (though he played through it.)

Based on tonight and the playoffs as a whole, though, it’s hard to bet against Miami representing the East in the NBA Finals.