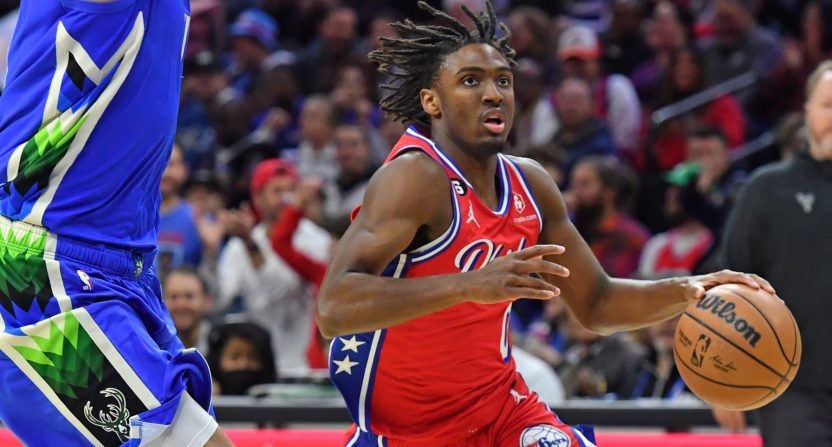 Tyrese Maxey was on his way to having his best game in what’s been a tremendous season for him in Friday night’s game against the Milwaukee Bucks. But early in the second half, the Philadelphia 76ers guard injured his left foot.

The play happened as Maxey was driving to the hoop against Milwaukee’s Jevon Carter. Maxey planted awkwardly. After his left foot briefly landed on Carter’s, Maxey’s ankle twisted.

Tyrese Maxey injured his left foot on this play in Friday's game against the Bucks.pic.twitter.com/F4fvfHbXUR

He was quickly ruled out for the remainder of the game.

Tyrese Maxey is out for the rest of the Sixers-Bucks game, per @CassidyHubbarth.

While the X-rays came back with good news, the complete severity of Maxey’s injury won’t be known until an MRI on Saturday.

Just brutal luck for the Sixers. Maxey is on the cusp of breaking out as a potential All-Star. Hopefully it’s nothing serious. https://t.co/gdIUjvsoW9

More will be revealed on Saturday, but Maxey will almost certainly miss some time. That’s bad news for the 76ers, as he’s been one of the clear bright spots in what’s been an inconsistent season for the team.

Maxey was also having a great game against the Bucks before getting hurt.

Maxey had maybe the best half of his season in the first half tonight against Milwaukee, scoring 24 points to go with five assists on 9-12 shooting, including 3-4 from 3. https://t.co/Qp5ouhYtpQ

Philadelphia was only 7-7 heading into Friday’s game. If Maxey does miss a lot of time, the 76ers will need to find some way to replicate his production, as they don’t have a lot of wiggle room.