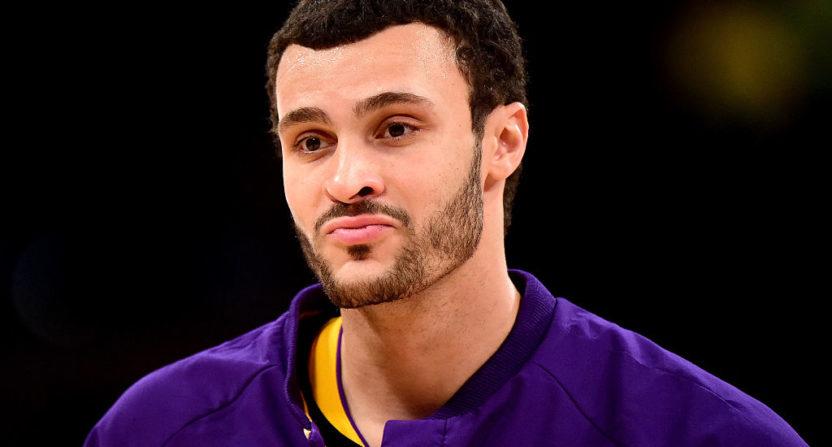 Lakers forward Larry Nance Jr. is known for his humble personality, and he continually lives up to that. Even when Nance was a 10-year-old grade school student, he wrote a few adorable letters to U.S. soldiers deployed overseas to lift their spirits.

After 14 years, the soldier he wrote to, Bianca Snow, realized the 10-year-old boy grew up to become an NBA player, and she reached out to him on Twitter to thank him.

@Larrydn22 many moons ago u were my pen pal during my tour overseas. It always meant alot, still have the letters. Glad your dreams came tru pic.twitter.com/i9hybhLJFw

My name is Larry Nance. I have 1 sister, 1 brother that annoy me all the time. My dad played in the N.B.A.

Thank you for fighting for us in the war. You must be brave and miss your family.

I hope you get home soon and see your family soon. Good luck.

In his second letter, Nance wrote:

Is the war almost over? Where is Saddam? How are you? I’m fine. Thank you for writing back. Where are you?

Are you good at basketball? I like the Lakers too they are winning there series with the Timberwolves. Who is your favorite player? Mine is Shaq. Who do you want to get LeBron James? I want the Cavs to get LeBron, that is because my dad played for the Cavs. His number is retired in the Gund Arena.

And Again Thank You!!

Nance was thrilled to hear from his old pen pal on Twitter and responded by inviting her to a Lakers game this season.

WOW! That's awesome! So cool you kept these… Please by my guest to a game this year. I would love to meet you! https://t.co/2asN2o4ZhX

Thank you for responding. It would be an honor.

According to SB Nation, Snow posted the letters to her Facebook three years ago, saying she wanted to find and thank the kid who wrote for her because “those letters got me thru” the foreign tour. But three years ago, Nance was a junior at Wyoming, and only diehard basketball fans knew his name.